Birmingham - World number two Andy Murray has promised to do everything in his power to ensure Great Britain successfully defend their Davis Cup title.

Despite the arrival of his first child a few weeks ago and his burning desire to add more Grand Slam crowns to his collection, Murray remained committed to Britain's Davis Cup squad after being swept along in the wave of euphoria that greeted their historic victory last year.

Novak Djokovic, Roger Federer and Rafael Nadal have all taken time off from Davis Cup duties at various times, but Murray wants to play in all this year's ties if fit and sees no reason why, after ending a 79-year wait for a 10th title, Britain cannot hold onto the trophy.

Britain open their title defence against Japan in Birmingham on Friday when Murray faces Taro Daniel in the first singles rubber and the Scot said: "I think one of the reasons I'm here this year is because I really want to try and do it again, after experiencing it last year.

"I never thought we would be able to do it but then when we did it was like why not, why can't we do it again?

"I think everyone on the team loved that whole experience of winning and I think we would all love to try to do it again, but the best way to do that is not thinking that far ahead.

"We could lose this tie, it's a really tough match to win, they have a really, really good team."

The second singles match on Friday will be between Japan's world number six Kei Nishikori and Dan Evans, who was only selected to play after Kyle Edmund failed to overcome a back injury.

Edmund sustained the problem in practice on Wednesday and captain Leon Smith deemed him too much of a risk.

"We stopped (practice) immediately to give it as much time to settle down as possible. It was better this morning, but, like a lot of these injuries, it felt like a bit of a race against time," Smith said.

"Therefore it would be a risk to him, a risk to the team. And we've got Dan who is fully fit, plays well indoors, good Davis Cup experience and ready to go.

"It's tough on Kyle, who is a very good player. But I've got every confidence that Dan can go in and play very, very well over this weekend."

If Britain beat Japan they will face either Kazakhstan or world number one Novak Djokovic's Serbia in the next round. 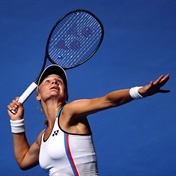