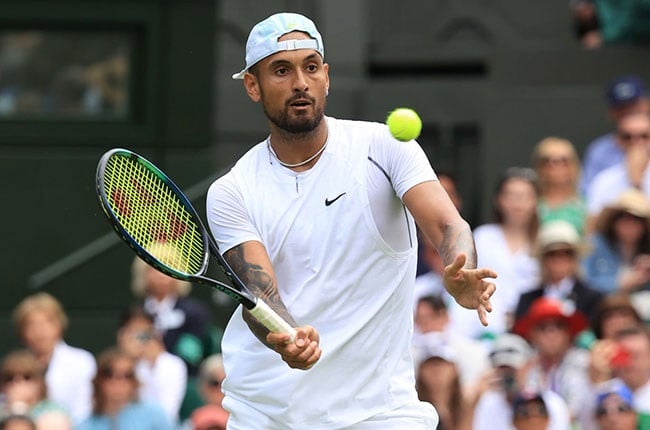 Nick Kyrgios shrugged off his Wimbledon final defeat to Novak Djokovic on Sunday, claiming: "This is the best I've felt in two weeks."

The Australian, playing in his first Slam final at the age of 27, had Djokovic rattled in the first set on a sun-kissed, sweltering Centre Court.

"I feel like there's so much weight on my shoulders all the time when I step out on the tennis court. Now it's just released and I feel amazing," said the maverick Australian.

"This is the best I've felt the two weeks. I was obviously super-excited to be here and I had some high hopes, but I've never felt good.

"I just felt so much pressure. There's so much anxiety to do things or achieve things. So I feel unbelievable. Like I'm two beers deep."

Kyrgios, ranked 40, carved a sometimes thrilling, often controversial path to the final at the All England Club.

He was accused of spitting in the direction of fans, then described as having an "evil side" and being "bully" by third-round rival Stefanos Tsitsipas.

But there was some impressive and inventive hitting, not least in the final, where he clattered 30 aces and 62 winners in total.

He also found time for an underarm serve and a couple of "tweeners".

Despite the loss, Kyrgios insists he feels he "belongs" with players such as Djokovic, Rafael Nadal and Roger Federer, the sport's undisputed superpowers.

However, he believes that had he won on Sunday, his motivation to repeat the triumph would have waned.

"I've been told my entire life winning Wimbledon is the ultimate achievement," he explained.

"It's taken me 10 years to finally get to the point of playing for a Grand Slam and coming up short.

"I feel like if I had won that Grand Slam, I think I would have lacked a bit of motivation. Coming back for other tournaments, like (ATP) 250s and stuff, I would have really struggled."

At the on-court presentation, Kyrgios had described Djokovic as a "god".

"We've obviously butted heads a little bit. But as a tennis player, I always respected him, what he was able to do," he said.

"I feel like we have a bit of a good relationship now."

As for the future, Kyrgios insists his competitive fires still burn even if his commitment to the tour is not full time.

"I feel like my fire's been lit this whole year," he said. "To find people that finally have my back, they realise that I'm immensely talented and I have a lot more to do in this sport.

"A month and a half ago, I was playing basketball with some boys back home.

"I literally said to one of them, 'Look, I think I'm going to have some fun and maybe win Wimbledon'. Then, I'm here as a finalist. How am I here? It's pretty cool."

Kyrgios found a fan in Goran Ivanisevic, a former Wimbledon champion who is now the coach of Djokovic.

"You cannot prepare for a match against Nick Kyrgios. Nick Kyrgios is a genius," said Ivanisevic.

We live in a world where facts and fiction get blurred
In times of uncertainty you need journalism you can trust. For 14 free days, you can have access to a world of in-depth analyses, investigative journalism, top opinions and a range of features. Journalism strengthens democracy. Invest in the future today. Thereafter you will be billed R75 per month. You can cancel anytime and if you cancel within 14 days you won't be billed.
Subscribe to News24
Next on Sport
Djokovic officially declares 'bromance', Kyrgios breaks Wimbledon rules after loss