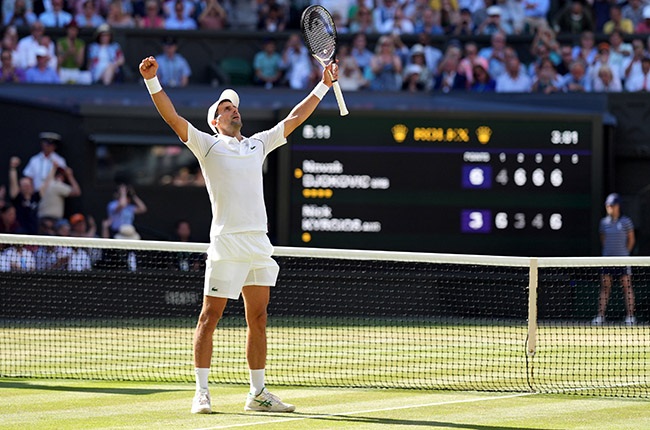 Novak Djokovic slipped four places in the world rankings on Monday despite retaining his Wimbledon title due to the men's tour governing body's controversial decision not to award ranking points for the Grand Slam event.

The ATP and WTA made the call after Wimbledon organisers barred Russian and Belarusian players due to Russia's invasion of Ukraine.

Russian and Belarusian players have been permitted by the ATP and WTA to carry on competing at tour events but under a neutral banner.

Australian Nick Kyrgios, beaten by Djokovic in Sunday's final at Wimbledon, slips to 45th in the rankings, a drop of five places.

Spanish great Rafael Nadal - who is one ahead of Djokovic in total Grand Slams with 22 - moves up one place to number three as he had no points at stake after missing last year's Wimbledon due to injury.

Another big loser in the rankings is Matteo Berrettini, who lost to Djokovic in last year's final at the All England Club.

The Italian, who withdrew from this year's edition due to Covid-19, drops four spots to 15.

His compatriot Jannik Sinner, who gave Djokovic a fright in taking him to five sets in their quarter-final clash at Wimbledon, rises three places to number 10.

On the women's side, Wimbledon finalist Ons Jabeur dropped three places to fifth in the WTA rankings.

The WTA Tour, like the ATP Tour, also decided not to award ranking points for the Grand Slam event after Wimbledon barred Russian and Belarusian players due to Russia's invasion of Ukraine.

Even so a Russian-born player won the competition.

Elena Rybakina, who plays as a Kazakh also gained no reward for her first Grand Slam title and remains ranked 23rd in the world.

Tunisian Jabeur lost the 430 points she collected for her quarter-final appearance at Wimbledon last year.

We live in a world where facts and fiction get blurred
In times of uncertainty you need journalism you can trust. For 14 free days, you can have access to a world of in-depth analyses, investigative journalism, top opinions and a range of features. Journalism strengthens democracy. Invest in the future today. Thereafter you will be billed R75 per month. You can cancel anytime and if you cancel within 14 days you won't be billed.
Subscribe to News24
Next on Sport
Djokovic hopes for virus rule change to allow him to play US Open