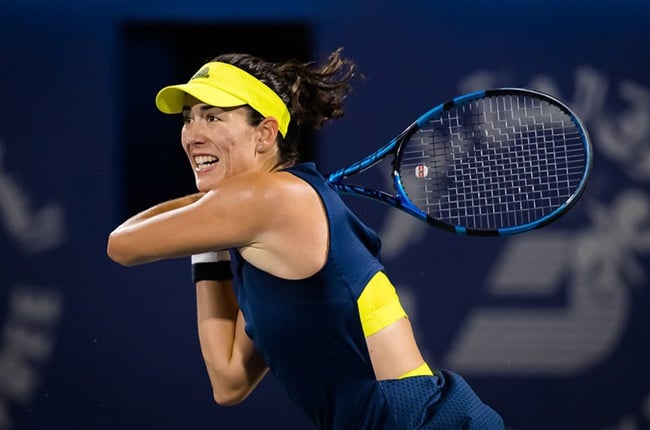 Spanish second seed Muguruza, who turns 28 on Friday, took her ninth career WTA title and second tour crown of the year after Dubai in March.

Muguruza, whose biggest titles came at the 2016 French Open and 2017 Wimbledon, claimed only her second US title after a 2017 trophy in Cincinnati.

Sixth-seed Jabeur, ranked a career-high 16th, broke ninth-ranked Muguruza in the fourth game and held serve from there to take the first set.

In the second, Jabeur broke Muguruza to seize command but the Tunisian sent a backhand wide to surrender a break that lifted the Spaniard level at 3-3.

Muguruza broke again in the eighth game and served for the set up 5-3. Jabeur denied four set points and forced two break chances before the Spaniard forced a third set on a service winner.

Muguruza zipped through the final set to claim the crown in the event, added as a tune-up for next week's Indian Wells tournament, postponed from March due to Covid-19.

Jabeur, who ousted top seed Elina Svitolina in the quarter-finals, won her only WTA title in June at Birmingham, becoming the first Arab woman to win a WTA crown.

Muguruza improved to 2-1 in her career rivalry with Jabeur, who beat the Spaniard in this year's third round at Wimbledon.

We live in a world where facts and fiction get blurred
In times of uncertainty you need journalism you can trust. For only R75 per month, you have access to a world of in-depth analyses, investigative journalism, top opinions and a range of features. Journalism strengthens democracy. Invest in the future today.
Subscribe to News24
Next on Sport24
Ons Jabeur to face Garbine Muguruza in WTA Chicago final

Choose your newsletters
Voting Booth
After the opening weekend of URC action, what did you make of the South African struggles?
Please select an option Oops! Something went wrong, please try again later.
It exposed the quality of South African rugby...
38% - 2064 votes
There were positives to take
7% - 362 votes
We shouldn't read too much into one weekend
17% - 899 votes
It will take the SA sides time to adjust to the new competition
38% - 2069 votes
Previous Results
Showmax
The story of a legend: Sir Alex Ferguson