Auckland - Venus Williams says she's as fit and healthy as she has been in years and hopes to turn a dream into reality when she starts her season at the Auckland WTA tournament from Monday.

The seven-time grand slam winner arrived in Auckland from Los Angeles on Friday and said her aim was to reach the Auckland final.

Williams said "the other day I dreamed I had a win and I woke up and realised I hadn't even played a round. I hope to go round by round and at least get to the finals - that would be awesome."

The 33-year-old, who won her last final in Luxembourg in October 2012, said she had been working hard during the off-season.

"I feel like I'm coming into the season as fit and healthy as I have in many years, so for me that's exciting and I have a positive outlook. My goal is to be like Serena Williams!"

We live in a world where facts and fiction get blurred
In times of uncertainty you need journalism you can trust. For only R75 per month, you have access to a world of in-depth analyses, investigative journalism, top opinions and a range of features. Journalism strengthens democracy. Invest in the future today.
Subscribe to News24
Related Links
Murray shrugs off defeat
Federer's career at crossroads
Ferrer splits with coach
Next on Sport24
Sakkari sends top seed Svitolina packing at Ostrava 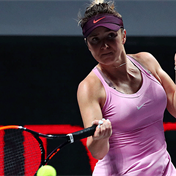