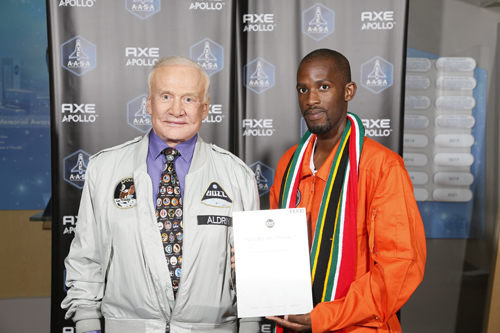 Axe Apollo Space Academy® has revealed the final crew from around the world that will launch into space, and we are proud to announce that Mandla Maseko from South Africa has been selected among the Next Generation of Space Explorers. After receiving one million submissions from hopefuls across the globe, 107 brave guys and girls were selected from 60 countries to gather in Cape Canaveral, Florida for the final stage of the Axe Apollo Space Academy® to prove they have what it takes to be an astronaut. Under the stewardship of A.A.S.A. head and astronaut legend Buzz Aldrin, 23 extraordinary recruits, including Mandla, have been selected to complete the final crew that will journey into suborbital space. “I’m thrilled to join AXE Apollo in offering the next generation of space explorers the chance to experience the wonders of space as I did,” Buzz Aldrin stated in reference to the A.A.S.A. selection announcements. While at the AXE Apollo Space Academy®, Mandla challenged his mental and physical limits during a series of missions that gave all recruits a taste of the thrills and trials faced by real astronauts. Among the series of training missions, Mandla mastered piloting an Air Combat USA® aircraft and braced himself for the strength of blast off in a G-Force Simulator at the Kennedy Space Center Visitor Complex. Mandla is among an international team of A.A.S.A space travelers. The A.A.S.A. team includes men and women representing countries around the globe, some of whom will make history as the first from their nations to go to space. Some of these history-making winners include the first Filipino, Thai and New Zealander to go to space. In total, the A.A.S.A. international team represents Canada, Brazil, United Kingdom, Germany, France, Netherlands, Spain, Slovakia, Russia, Turkey, Egypt, India, Japan, Indonesia, Philippines, Thailand, Vietnam, Australia, New Zealand, Norway, South Africa and China. On the heels of this remarkable opportunity, Mandla, as is to be expected, is very excited. “Wow. Now I believe that dreams really can come true. This is a once-in-a-lifetime opportunity for anyone. But for me, it’s totally unreal. I will make South Africa proud.” Axe South Africa Brand Manager, Vincent Viviers stated that: “This is a very exciting time for AXE and for South Africans. We’re breaking barriers in terms of what we can do and the ways in which we can reward consumers. This will go down in the history books and we’re thrilled to be a part of it.” Mandla’s remarkable journey will conclude with his flight to space onboard a Space Expedition Corporation (Space SXC) shuttle: XCOR’s LYNX Mark II. To learn more about the AXE Apollo Space Academy® and the journey ahead, visit (www.axeinspace.co.za). Please let us know if you would like us to arrange an interview with Mandla via email or phone. More information about the full list of winners is available. by: Verve Marketing and Communication