Singer The Formation hitmaker picked up several trophies at the prizegiving, including the coveted Video of the Year title, for her Lemonade album and short film, but she was also a clear fashion champion on the night, switching into a total of six outfits throughout the event. 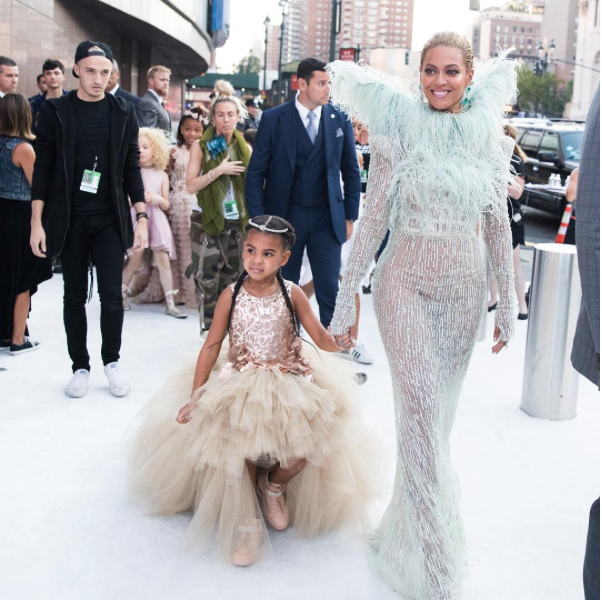 She and her little girl Blue Ivy turned up to the VMAs resembling angelic princesses as they walked hand in hand on the red carpet, with momma Beyonce sparkling in $13 million worth of Lorraine Schwartz jewellery. The dazzling earrings made of Colombian emerald, pink diamond and paraiba are valued at $1.8 million (£1.4 million), while the four diamond rings on her fingers total nearly $12 million (£8.8 million). Beyonce's gleaming red carpet dress was designed by Francesco Scognamiglio, an Italian designer who has worked with the star before on outfits for her The Formation World Tour concerts. His VMAs design for her was a bold and sheer floor-length gown topped off with Swavrovski crystals and pastel blue feathers, with the stunning plumage concealing her neck from view. Beyonce's four-year-old daughter was equally as stunning and elegant as mom, wearing a couture Mischka Aoki dress, which retails for just under $11,000 (£8,400) at New York department store Bergdorf Goodman. The designer tells ET Online that the 3-D flower applique featured on the metallic gold leatherette bodice of Blue Ivy's gown was "individually hand-sewn, one by one" and customised just for her.