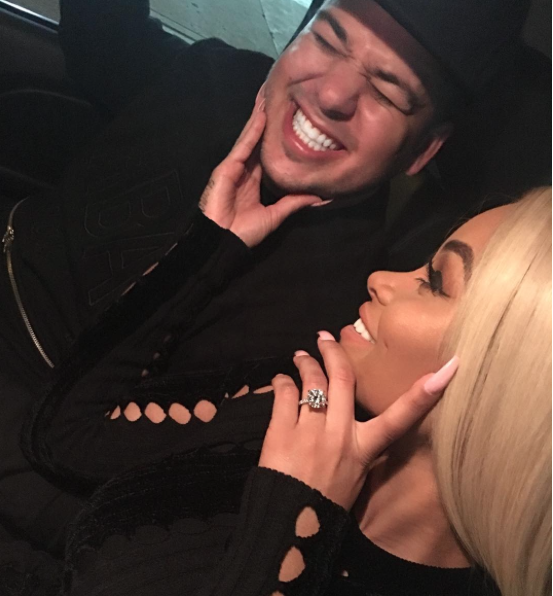 The 29-year-old reality star is expecting his first child with Chyna, who already has a three-year-old son King Cairo with her ex Tyga. Rob and Chyna took part in a Facebook Live video chat on Wednesday (17Aug16) to promote their upcoming reality series, and were questioned about their plans for extending their family. “Rob wants me to have like four more, or something like that,” Chyna, 28, said when asked about having more children. Rob then suggested "you could do, like, three more", to which Chyna replied: "Three more, so four total. Plus King, that’s five."

Rob has an parenting inspiration in mother Kris Jenner, who is mum to Rob plus Kim, Kourtney and Khloe Kardashian and Kendall and Kylie Jenner.

“That’s what my mom did,” Rob said. “She did five and she pushed them all out."

As Chyna bemoaned what three more pregnancies would do to her "poor body", Rob encouraged: "Look at my mom! My mom is banging!" and Chyna agreed: "Your mom looks bomb, though."

The expectant parents were also asked if they would continue in the Kardashian family tradition by choosing a moniker for their baby beginning with a K.

While Rob admitted "probably not", Chyna tried to play it coy, replying: "You guys have to stay tuned for that too 'cause I'm not trying to give up no more details about the baby."

Rob and Chyna will be seen planning for their impending new arrival as well as their nuptials in their reality show. While Chyna wants to go all out for the ceremony, Rob was keen to have a quickie wedding at the courthouse in Los Angeles.

"If it was up to Rob, literally, we would go tomorrow," Chyna laughed, to which Rob replied, "We would have been at the courthouse, downtown, a long, long time ago."

One of the main reasons Chyna doesn't want to rush into walking down the aisle is that she wants to regain her pre-baby body before squeezing into a wedding dress.

They also revealed during the chat they are keen for his siblings to babysit, particularly Kylie, who Chyna infamously had a feud with, and the fact that Rob spent a staggering $13,000 (£10,000) on food delivery for his pregnant wife-to-be in just one month.