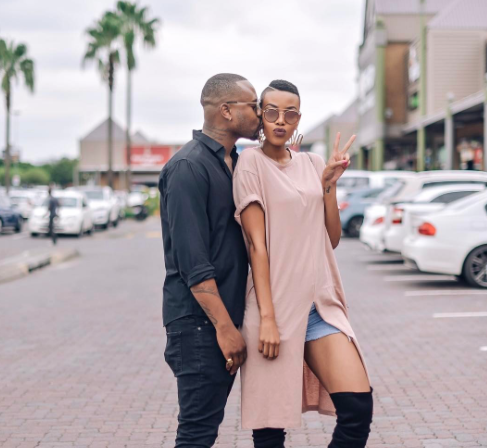 It took a little drama for these two to confirm their relationship. Over the weekend Loot, real name Luthando Shosha, posted and image with the rapper kissing her on the cheek and some fans insinuated she was the reason the hip-hop star divorced his wife. Some called her Reason’s side chick and it’s then he retaliated and took to Twitter to clarify things. Although still cagey about their relationship, you’d be living under a rock to not know that these two are engaged. It also seems they aren’t bothered of having their picture taken together. Tbo Touch posted this image over the weekend of him and his wife together with Pearl and Robert. The rapper confirmed at the 16th Metro FM Awards that indeed he was engaged to be married to his longtime girlfriend. The couple has a four-year-old daughter together. Despite revealing his engagement Kwesta still remains cagey on speaking about Yolanda. The Zimbabwean-born actor secretly got married to his girlfriend of 13 years over the weekend. Friend and fellow actor and presenter, Thomas Gumede posted an image of the couple on their wedding day.
We live in a world where facts and fiction get blurred
In times of uncertainty you need journalism you can trust. For only R75 per month, you have access to a world of in-depth analyses, investigative journalism, top opinions and a range of features. Journalism strengthens democracy. Invest in the future today.
Subscribe to News24
Next on TrueLove
5 minutes with writer and creative producer Mahlogonolo “Manchester” Mahapa