Celebs took to social media to express their condolences to the family of the murdered 22-year-old woman who went missing for weeks before her body was found burnt. On Thursday, Karabo’s father, Tshepo announced his daughter’s death via Facebook soon after he had called for assistance in finding her. She’d been missing since 28 April and quickly pictures of the 22-year-old and part-time student circulated the internet and social media in attempts to find her.

On Tuesday‚ her friend‚ Stephy Leong‚ took to Twitter‚ where she announced that Karabo’s ID and  passport documents had been found dumped in Sandton.

Speaking to Eyewitness News, family spokesperson Thapelo Mokoena says the body of his niece was burnt and as expected Karabo’s mother is struggling to cope with the news and loss.

“You know, not identifying your child is very traumatic.”

Revealing to the website he also says they have also learnt that the young woman faced abuse and this adds to the agony.

“What I can confirm is that there’s a case of assault that was opened by the deceased.”

The boyfriend is expected to appear in court on Friday morning.

Celebs have come out in droves to send their condolences to the family and also to speak of domestic violence against women. 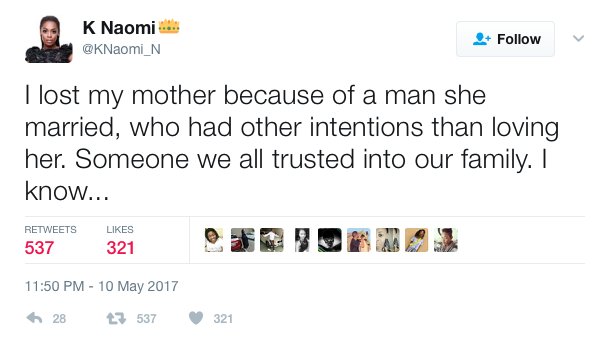 Dear Sisters As muh as we can say MEN need to change....it's time WE as Woman change!!! There are signs...take them seriously. I saw her (help by retweeting my friend is missing for 2weeks)post yesterday and thought God pls hope they find her. I wake up today and she is trending. Cos her ex boyfriend/ boyfriend killed and burnt her beyond recognition. My heart goes out to her Dad who initially posted about her disappearance. LADIES it's NOT ok to stay with someone who belittles and hits you! Rest in peace Karabo