Jamie Foxx: 'Oprah saved me from drowning in alcohol' 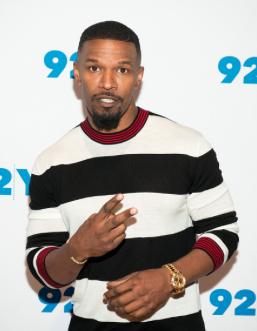 Actor Jamie Foxx has credited Oprah Winfrey with saving his life after she staged an alcohol intervention for him. The star reveals he became a party animal at the height of his career around the time his Ray Charles biopic, Ray, was released in 2004.

The movie earned him an Academy Award for Best Actor but his celebrations were out of control and morphed into an alcohol and drug haze, which left close friends and colleagues more than a little concerned.

“I’m having such a good time and I’m not knowing I’m f**king up,” Jamie told U.S. shock jock Howard Stern during a SiriusXM radio interview on Tuesday (23May17). “I’m drinking… I’m doing every f**king thing you could possibly imagine.”

The 49-year-old was slammed back into reality when Oprah phoned him up and delivered a hardcore wake-up call.

"(She said), 'You’re blowing it, Jamie Foxx. All of this gallivanting and all this kind of s**t, that’s not what you want to do... I want to take you somewhere, make you understand the significance of what you’re doing',” he added.

Winfrey then organised a meeting for Foxx at musician Quincy Jones' home, and invited several legendary African-American celebrities to help her help him.

“We go in the house and there are all these old actors, black actors from the 60s and the 70s, who look like they just want to say, 'Good luck... Don’t blow it'."

Screen legend Sidney Poitier was among the entertainers in attendance and he offered Foxx advice he'll never forget, telling the actor, "I want to give you responsibility... When I saw your performance, it made me grow two inches'."

After hearing Sidney's words, Jamie broke down in tears and vowed to change his ways.

“To this day, it’s the most significant time in my life where it was, like, a chance to grow up," he said.