The 31-year-old is currently travelling the world promoting her new movie Hidden Figures, and the film's title is playing out in real life through the unique hairdos Janelle has been sporting during press interviews and screenings. 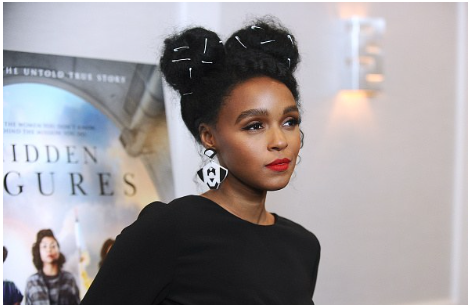 She informed fans of her cryptic communications in a post on her Instagram account on Wednesday (04Jan17), in which she shared three hairstyles side-by-side in one spliced photo.

In the first, Monae's hair is parted into two buns on the top of her head, with googley-eyed buttons infused into the strands throughout. The second and third hairstyles in the photo are both updo buns, with threaded golden wire and white safety pins.

"From the Eyes, to the Gold Wire, and then to the White Safety Pins... Can you guess what messages (I) am sending and speaking through my hair?" she asked fans in the image caption.

Janelle left the question open and has not offered anymore information as to the true meaning behind her hairdo transmissions. However, fans may have the chance to decode the communications by using mathematical formulas, as Monae portrays real-life mathematician Mary Jackson in Hidden Figures, a story about three African-American women who provided genius calculations to help launch American astronaut John Glenn into space in the 1960s.

Janelle has previously spoken about how important it is for her to express herself through hairdos and over the years she has even developed a signature pompadour style, which is referred to as 'The Monae'.

"I can’t give you the secret to the Monae, but you can follow it on Instagram," she told Byrdie.com while discussing the popularity of the look. "Yes, my hair has its own Instagram page. If you follow it, there’ll be good advice on how to style natural hair."