Jay Z prevented an overzealous fan from getting a little too close to Beyonce on Monday  as they attended the New York premiere of Hands of Stone. 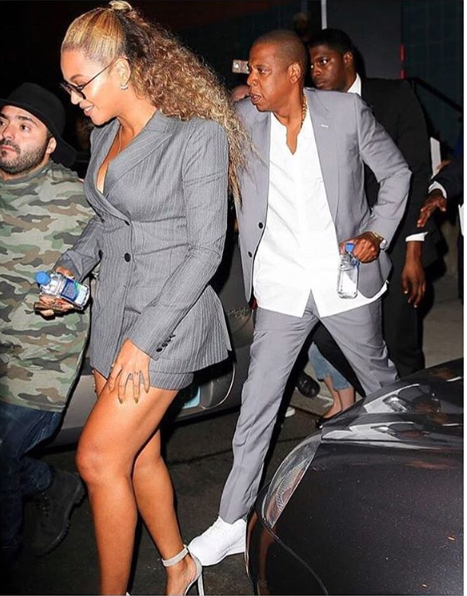 The hip-hop supercouple was among the guests at the SVA Theatre, where pal Usher's new film, in which he plays boxing legend Sugar Ray Leonard, was screened, but they tried to avoid the crowds by entering and exiting via the venue's back door.

One man managed to briefly walk alongside Beyonce as she left the premiere, and tried to snag a selfie with the star, but Jay, who was a few steps behind his wife, stuck his arm out to keep the fan from infringing on the singer's personal space.

Video footage of the incident, obtained by TMZ.com, shows a bodyguard intervening, making the guy step back to clear the path for the musicians as they stepped into a waiting car.

At the premiere, Beyonce and Jay Z mingled with Usher and his co-stars, including Robert De Niro and Edgar Ramirez, who portrays Sugar Ray Leonard's ring rival Roberto Duran.

Usher shared a photo of the loved-up couple cuddling and smiling for the camera on his Snapchat page, simply captioning the image, "Familia".

A representative for movie studio The Weinstein Company also posted a photo of trio all grinning at the premiere, noting, "Nothing to see here, just #Jay #Bey and #SugarRay hanging at the #handsofstone premiere".

Beyonce and Jay Z are enjoying a little down time after the Halo singer wrapped up the European leg of her Formation World Tour earlier this month (Aug16). She is expected to join Jay Z in Philadelphia, Pennsylvania over the U.S. Labor Day holiday weekend (03-04Sep16) for his Made In America festival, before resuming her trek in New Jersey on 7 September (16).