We were first introduced to Nomzamo Mbatha through the MTV Base VJ search in 2012 and, although she didn't win the grand prize, she's gone on to cause a stir in the South African entertainment industry due to her role in the hit telenovela isiBaya. The Durban-born actress opens up to us about her first year in the industry, what it's like being one of the hottest young women in SA and what keeps her grounded. You’ve just won the ‘Hottest Chick’ title at the Feather Awards. What does this mean to you?

[Laughs] Hectic stuff! I'll be honest, I've never seen myself in that light because I'm such a simpleton and just socially awkward. But it's cool that us average girls can make the ‘hottest chick’ list [laughs]. I was flattered to have even been nominated, let alone win the award. What it means is that I now need to find a little corner that I can hide in so people can't judge me with the pre-conceived thoughts about this award or title. You’re good friends with your castmate, Jessica, but some media and fans love to pit two young women against each other – how do you guys deal with the comparisons?

People are just so naughty! I'll speak for myself and say that I pay no mind to that because it's irrelevant to who we are and what we are about. As much as it's funny or cute, I think we need to celebrate individuals for who they are without having to put them against someone. You never have compare Angelina Jolie and Halle Berry because those are two individuals who may be doing the same thing, but are celebrated in different ways and spheres.

Did you feel intimidated having your first acting role alongside well-respected actors like Siyabonga Twala?

Most definitely! I had all these giants around me and I had never even set foot on a film set. But yet you had everyone trusting this young girl from basically nowhere to carry a scene. But [feeling intimidated] was self-inflicted because [Siyabonga] was really a great figure on and off camera who has been supportive since the day we all drove down to KZN to start shooting at the beginning of the year. You didn’t train to be an actor, but you’re causing a stir on screens. What’s your goal as an actor – where do you see yourself in 10 years time?

Since day one I've always wanted to maintain my respect for the craft. There are so many people who studied this and some who have been struggling to find a job, which puts me in a difficult position because I have nothing to 'back me up.' So, in the next 10 years, I want to have gone to a Film and Acting school to refine and understand my talent and hopefully be a part of film or television projects that will change people's lives and hopefully mine. I want to make a BIG mark first on my continent before I go conquer North America and eventually the world. How do you balance maintaining who you are as a person in the midst of all the industry hype?

My late grandmother taught me that nothing, whether positive or negative, should have the power to validate or invalidate you, so hype or 'negative comments' are not on my radar. I'm always at home or with friends who are not in the industry, so I get to talk and be a part of conversations that have nothing to do with what I do (well sometimes). 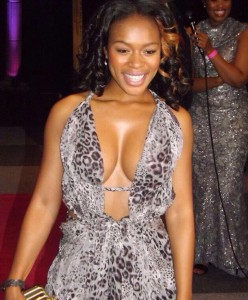 What’s the craziest rumour you’ve heard or read about yourself?

A tabloid reporter called to ask if I had had a boob job after the whole frenzy about the dress I wore to the Feather Awards. She said that people 'apparently observed' that my boobs don't move. I think that was so absurd… As if I've been in the industry long enough for people to have noticed such a change!

What’s been one of the most unexpected things about fame/ stardom?

Definitely the politics involved… Nobody tells you these things. It's so scary; I don't think I'll allow my kids to come into this industry [laughs].

What do you do away from the set? How do you relax?

I love reading, going to the cinema and the talks I do at various schools. I'm really just boring.

What’s the one thing people would be surprised to know about you?

That I burp a lot. It's so unladylike, or maybe I have some kind of burping disease? [Laughs] You’ve already discovered one ‘hidden talent’ (acting), do you have any more hidden talents?

Maybe I'll try out for Idols and see if I can sing – who know? [Laughs]

Tell us the secret to maintaining your fabulous hair?

Castor oil! It works wonders – it really does make the hair thicker and grow faster.