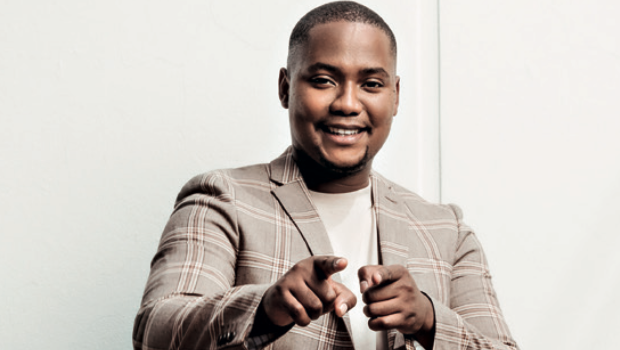 Siya Sepotokele has a very mature aura; the type that could have you mistaking him for a 30-something-year-old. “I get that a lot, and I think it is as a result of having older friends. I grew up around older people, which also informed my taste in music.” The 24-year-old adds, “In fact, the only peers I’m friends with are my former schoolmates. I seem to thrive around older crowds,” he chuckles.

Siya’s was one of the moving voices that sang during Mbali Dikana’s funeral scene on 1Magic’s telenovela The River in January. Word on the street is that his singing voice could melt the iciest of hearts. He shyly agrees, adding that he’s been putting off a musical career because he hasn’t yet met a producer who understands his taste. “I’m into that PJ Morton sound, and hope to recreate one similar to his,” he explains. His voice, he shares, landed him a scholarship to study at one of the most prestigious private schools in the country – St David’s Marist Inanda.

You mentioned that post matric, most people assumed that you would choose a conventional academic career, but instead you studied music, and are now acting. Where did that expectation stem from?

I’m a clever black [chuckles]. Honestly, people assumed I would go the academic route because I was one of those smart guys. In my head, I was going to complete my studies at Sivuleleni Primary, followed by Bona Comprehensive School then Selelekela or Bhukulani High School, to do the same-old conventional subjects. St David’s Marist Inanda showed me that there was more to life by exposing me to arts subjects. I did music, geography and business studies. I had initially chosen maths and biology – the latter kicked my behind – because I was still stuck in that township mentality of following a “certain” subject stream.

Describe day one of arriving at a private school. It was the biggest culture shock of my life – I had a friend there who drove a Ferrari! It was also an eye-opener because I had always been a big dreamer – St David’s confirmed that I wasn’t crazy for having the colossal dreams I had. I failed my first test because everything was done in-depth. However, it took me two weeks to assimilate to the new curriculum.

How did you end up in acting? I didn’t study drama. Everything that I know I learnt on the job. I respect people who studied drama, but in the same light, we must work and deliver. I go out of my way to constantly feed my passion. I don’t believe in talent because it can only take you so far.

What about acting is underrated? The actual work. People think it’s as easy as getting a script and memorising your lines. I read my scripts like a book, to get an understanding of the bigger story, and then I later go back to my specific scenes. A friend of mine once said, “Don’t act in character; behave in character.”

Which social media accounts do you find yourself gravitating towards most? On Twitter, I love Will Smith and Les Da Chef’s content – the latter because I love cooking. On Instagram, it is @Robbreport and @boss_properties – I look at the latter as a collage of the life I’m going to live someday.

What are you still getting over? I don’t think that I will ever get over my mother’s death. It came too soon in my career. I wanted to do so much for her, but she left too quickly. She passed away a year after I had gotten my first acting gig.

Check out the full interview with Siya Sepotokele in our April issue. Get your copy on Zinio.