Ovarian cancer: What are the symptoms? 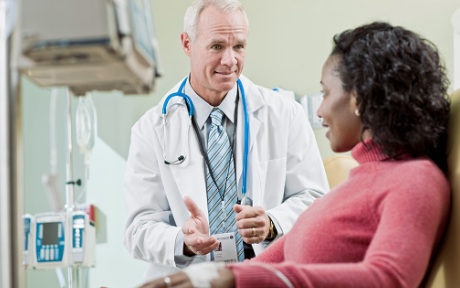 U.K. charity Target Ovarian Cancer surveyed nearly 1,350 women as part of their annual Pathfinder study and found that just 20 per cent of respondents could name bloating as symptom of the disease. Accordingly, the organisation is now launching a campaign to promote understanding of all main symptoms, which may include; abdominal bloating, tummy pain, difficulty eating or feeling full and needing to urinate more often or urgently. Annwen Jones, Chief Executive of Target Ovarian Cancer, said too many women are dying because they have been diagnosed too late. “If we want to improve survival, it is vital that we improve awareness and we need to act now,” she said in a statement. “We need to see national awareness programmes across the U.K., and today we’re calling on governments and executives in Westminster, Cardiff, Holyrood and Stormont to make that happen.” Jones also noted that it’s not just women that lack this vital awareness, as their survey found almost half (44 per cent) of GPs wrongly believe symptoms are present only in the later stages of ovarian cancer. In response to the survey results, Professor Debbie Sharp, Professor of Primary Healthcare at the University of Bristol and member of the Pathfinder 2016 Advisory Panel, said the low levels of awareness were worrying. “That we are seeing such low awareness, both among the public and GPs, is of great concern,” she added. “It is important that we act on this now, to give GPs the best chance of diagnosing the disease earlier, making it easier to treat.” Every year 7,300 women are diagnosed with ovarian cancer in the U.K., and 4,100 women die from the disease. Being diagnosed at the earliest stage of ovarian cancer doubles a woman’s chances of survival, the charity states. © Cover Media