Pharrell Williams praised the younger generation for fighting for gender equality as he collected an honorary degree on Wednesday (17May17).

The Happy singer received a Doctor of Fine Arts degree from New York University's Tisch School of the Arts at the Yankee Stadium on Wednesday and delivered a ten-minute commencement speech to graduates in which he praised their generation for helping create change with issues such as social justice, the use of technology, and equal rights. 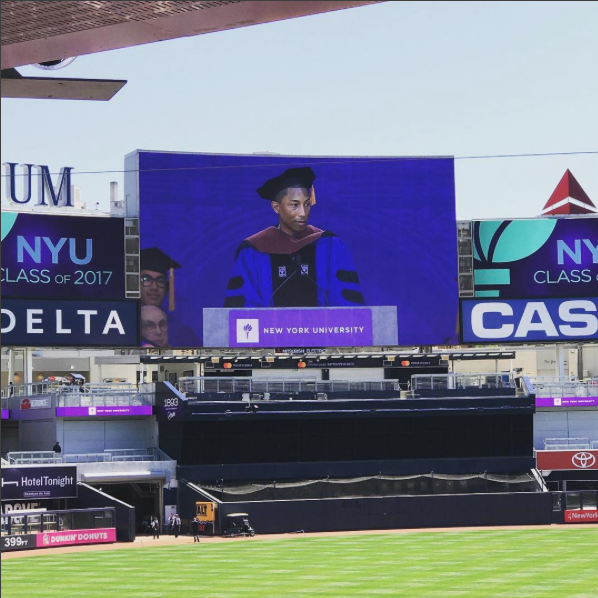 “Your generation is unravelling deeply entrenched laws, principals, and misguided values that have held women back for far too long and, therefore, have held us all back.” he said. “Imagine the possibilities when women are not held back. The world that you will live in that will be a lot better. This is the first generation that navigates with the security and confidence to treat women as equals.”

The singer, wearing a purple gown and graduation cap, also added, "There is no humanity without education and there is no education without humanity."

The 44-year-old has a connection to the university as he previously served as an artist in residence for a year from October 2015. During his stint, he taught classes and participated in talks.

Dean Allyson Green of Tisch heaped praise on Pharrell and called him a “shining example” for young people, and added: “From his outstanding creative work to his commitment to encouraging positive change in realms of educating youth and protecting the planet, he is a shining example of the infinite possibilities the world holds for all our students as they embark on their post-college careers."

The doctorate comes a couple of months after the singer received the Officier des Arts et des Lettres Award, a prestigious French honour, in recognition of his contribution to the arts.