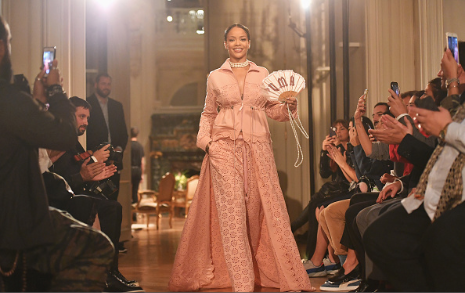 The Work hitmaker impressed fashion critics with the s/s17 designs she unveiled at the catwalk show hosted in France as part of Paris Fashion Week. Her funky athleisure collection featured a twist on Puma's signature sweatshirts, track pants, baseball hats and other apparel in a host of girlish pastel colours, such as off-white, green and soft pink. To heighten the clothing's femininity even further, the artist and her design team added details such as embroidery and lace to the pieces. The styling for the spectacular show was influenced by 18th century royalty, with satin corsets, pearls, and lace fans added as outfit accessories. However, some of the accoutrements were undoubtedly modern, with Rihanna choosing to use pieces such as lace do-rags to cap off the outfits. Speaking to New York Times ahead of the show, Rihanna revealed she was inspired by the Rococo movement in addition to one of the most famous monarchs of all time."I imagined Marie Antoinette at the gym," she said. Rihanna continues to win over the fashion elite after recently celebrating the retail success of her fall/winter 2016 Fenty x Puma collection, which was launched at Footlocker and department store Bergdorf Goodman in New York City earlier this month. Fans packed the stores to get a chance to purchase some of her wares and the humble star couldn't have been more grateful. "For an island girl like me to carry such a prestigious brand like Puma from just the athleticism of the brand to glamour, and bring it all the way to Bergdorf Goodman is such a big deal for me," she told the crowd at the launch party, according to FootwearNews. "It makes me feel very special. Thank you guys for taking a chance on me. I can’t believe my fans can come here and buy my collection."