There are some celebs who don’t mind changing their looks. NTHABISENG MAKHOKHA picks her top hair trendsetters. Singer and actress Beyoncé knows how to work her blonde locks to suit her mood. She’s taken them from cornrows to bouncy curls and from super-straight to braids, but over the years she’s always managed to keep her styles classy, yet fun. When this businesswoman and actress, best known for her role in Generations, chopped off

her healthy tresses, it shocked most of her fans. Yet she’s managed to really work her new

look and has inspired some of us to go for the same brave styles. Initially known from her Boom Shaka days,and now developing a thriving acting andsolo music career, Thembi has adapted her hairstyles to be part of her ever-growing ambition. As she continues to move with the times, you can be sure her hair will change with her. The Oscar winning actress, Halle Berry tried and pulled off many hairstyles before she decided to stick with the cropped look, a favourite among her admirers. And the way she rocks her ’do, it’s no wonder she’s been voted the most beautiful woman in the world.

THE SWITCH UP PRINCESS 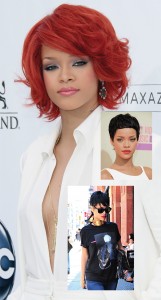 Who better to showcase an array of trendy hairstyles than this sexy Caribbean princess? She’s never been one to shy away from expressing who she is through her locks. Cropped or long, she’s always on point when it comes to setting hair trends. While Thandiswa’s voice elevated her to the standard of an African princess through her songs and performances, her hair has always been an extension of her personality. A true trailblazer, her hairstyles are original, well-groomed and a reflection of her creative spirit.