Lesego Tlhabi says she was fat shamed by a local designer: “I was made to feel like less than nothing” Trending SA presenter and satirist, Lesego Thlabi who is popularly known as Coconut Kelz, has detailed how she was allegedly fat shamed by local fashion designer, Lebogang 'Quiteria' Kekana.

Fat shaming is described as the act of criticising bigger individuals about their weight or eating habits to make them feel ashamed of themselves and this is exactly how Lesego says she felt after an incident with the popular designer.

In a detailed thread on Twitter, Lesego explained how she was fat shamed by the designer after she could not fit into one of his dresses.

“So today I went to a famous designer who was told my sizes way beforehand because it’s for TV. Does he not then declare very loudly in the store after a failed try-on that he has nothing for me & then uses words like “fatty boom boom” to describe how I’d look in the designs. Yoh,” she started to explain.

Lesego then went on to explain how those words made her feel ashamed and that she was not good enough to wear his designs.

“To the convo this week, this is why fatphobia is so different than other shaming. I was made to feel like less than nothing today because of my body. My body is not good enough for his dresses & he let that sh*­­­­t be known. He really could’ve said that to the stylist ON THE PHONE,” she continued. 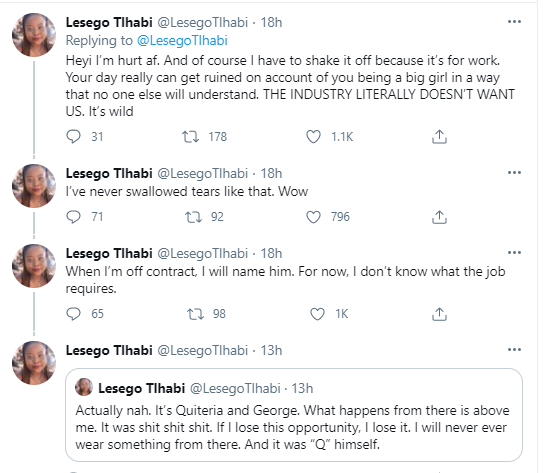 Despite many calling him out and other celebs such as Lexi Van relaying similar experiences with the designer, Quiteria, whose designs are worn by many celebrities, refused to apologise and recorded a chaotic Instagram live video where he claimed that she was lying.

“…make your own decision, base it on what you believe in. But there’s no statement I’ll write here, I’m not apologising  for nothing because I didn’t have a conversation with her and I’ve never called her fat…that was fiction,” he said.

Quiteria then continued on to say that his mother is also a big woman and that 'he loves dressing her'.

“Fat is not a bad word, I wish I called her fat directly but it wasn’t that,” he said.

Lesego is not the first person to speak out on being fat shamed. Plus size model and influencer, Thickleeyonce often shares and speaks out against fatphobia. She weighed in on the matter and supported Lesego. Other tweeps had a lot to say about this matter and many related to Lesego's experience and called out Quiteria for refusing to apologise.

Many have since rallied behind Lesego, and some have speculated that Quiteria might have been intoxicated in his live - particularly because of the disordered way in which he delivered most of what he was saying.

Let's take a look at some of the tweets in support of Lesego: We live in a world where facts and fiction get blurred
In times of uncertainty you need journalism you can trust. For 14 free days, you can have access to a world of in-depth analyses, investigative journalism, top opinions and a range of features. Journalism strengthens democracy. Invest in the future today. Thereafter you will be billed R75 per month. You can cancel anytime and if you cancel within 14 days you won't be billed.
Subscribe to News24
Related Links
Five styling tips for curvaceous women
#TLFridayPlaylist | Coconut Kelz shares her top 5 songs at the moment
Minnie Dlamini opens up about the fat-shaming and pregnancy rumours
Next on TrueLove
Thabsie, Gigi Lamayne and other celebrities reflect on their relationships with their fathers