Imagine drawing a fish on a page and within moments it comes alive and is swimming on your wall! Surrounding it is a breathtaking array of amazing sea life, including an octopus your child drew.

There was a time when art for kids meant crayons and chalk but a new wave of digital wizardry is opening doors for today’s tech-savvy children. And now for the first time South Africans can experience a place where technology meets art. Called Future Park, it’s an immersive wonderland where children can see their drawings come to life and adults can play, explore and indulge their imagination as much as kids. Touring the world, this digital extravaganza has wowed more than four million visitors. And thanks to YOU and its sister publications, Huisgenoot and Drum, Future Park’s next stop will be South Africa – it’s coming to Cape Town next month and later moves on to Johannesburg.

Here’s why you shouldn’t miss it. What is Future Park? This exhibition pushes the boundaries of everything you thought you knew about art, science and technology.

It’s all about collaboration and interaction. For instance, it’s not just a matter of admiring a beautiful artwork – you actually create the art and then engage with it.

Once your drawing of a fish has passed through a scanner to make it come to life, you interact with the fish, feed it virtual fish food and even control its movements.

And you don’t just listen to a piece of music. You compose it. Even if you’re completely tone deaf you’re able to enjoy the experience of being in an orchestra – you can make music simply by moving your body and your musical notes, combined with other visitors’ movements, create a tune.

Why it’s great for kids

Although originally created as a playground for adults, Future Park has proved to be a big hit with children too, says Shiori Shakuto of TeamLab, which developed the exhibition.

“It charms children because they’re more flexible than adults,” she says. Elzan Frank, an educational psychologist based in Stellenbosch, believes it offers parents a chance to introduce their children to science, maths and technology in a fun and interactive way.

“Kids like to move – they want to jump and hop around,” Frank adds. “That’s how the world becomes interesting for children. It shows them how exciting science can be.

”She’s definitely taking her eight-year-old grandchild to the exhibition. Frank, who’s practised as a psychologist for 30 years, says primary school kids will enjoy this creative

experience. “It will encourage their love of science and technology.” 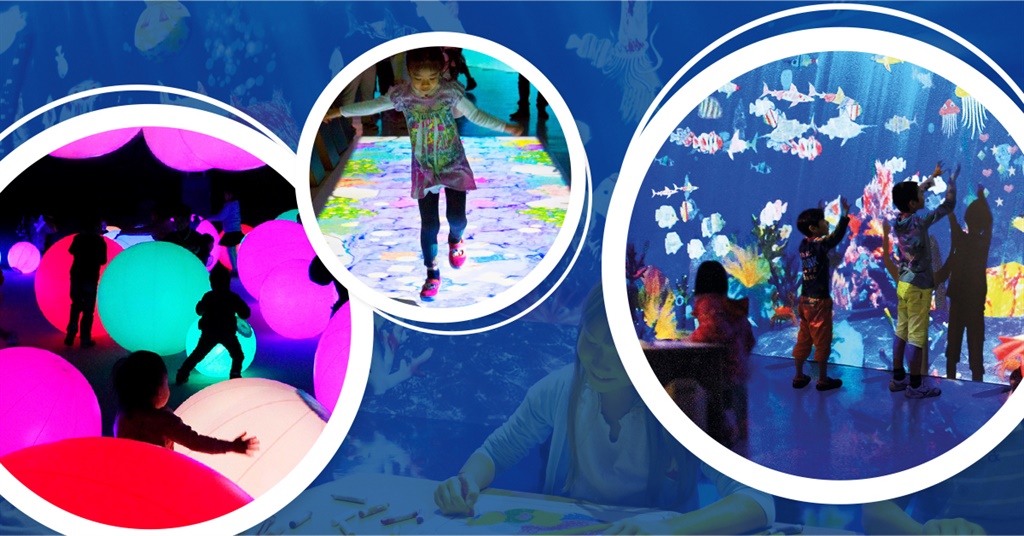 Teamlab is a group of University of Tokyo graduates who describe themselves as “ultratechnologists”. Among them are engineers, artists, architects, web and print graphic designers, editors and computer graphic (CG) animators.

When they got together in 2001 they were interested in exploring how digital technology could help to expand and amplify artistic expression by allowing viewers to collaborate in the creative process.

“Creative expression has existed through static media for most of human history, often using physical objects such as canvas and paint,” they say. “The advent of digital technology allows human expression to become free from these physical constraints.”

They’re also excited about the fact that technology has changed the way we experience art.

“Through an interactive relationship between the viewers and the artwork, viewers become an intrinsic part of that artwork.” Since being launched in 2014 Future Park has entertained people around the world, including in America, Korea, Taiwan, Thailand and Singapore.

A child draws a picture of their favourite sea creature. The picture is scanned and appears in a giant virtual aquarium. The child’s creation swims around the aquarium with those drawn by the other kids in the park. The children can touch the fishes and use a virtual fish food bag to feed them.

Pictures drawn by children are turned into unique 3D paper art they can take home with them. This process helps kids to understand the concepts of space and perspective. Converting a 2D sketch into 3D art helps them with problem-solving and logical thinking and also teaches them how to cut and fold and apply glue.

Here children don’t use only their imagination but also their bodies. They’re able to play hopscotch in a circle, triangle or square area. Colourful patterns light up as their feet land, with cool sound effects. This activity involves healthy physical exercise and teaches children to link colour and shape.

Children mingle in a space filled with colourful balls that contain sensors. Together the balls constitute an orchestra. The balls change colour when touched and when rolled they make sounds that change the music the orchestra plays. Connecting! Block Town Children create their own cities with digital cars and trains running on digital tracks and roads. Wooden blocks are used first to create the tracks and roads then digital versions are projected onto them. The more blocks added, the more tracks and roads in the virtual city. Kids can even link their cities with other kids’ creations.

A Table Where Little People Live

In this activity children watch tiny digital people moving around on a table. By placing obstacles in their way they can change their course and then watch as they jump right over the objects or climb onto them. Sketch Town Here children learn about diversity and how to look after their city. They can draw their own cars, buildings, UFOs and spaceships that move around in a 3D virtual city. Each element has a particular role – like the fire engines that protect the city.

The Story Of Time

This activity is suitable for older children with a better understanding of symbols. Children touch images on a screen that start telling their own stories. Graffiti Nature (Johannesburg show only)Kids get to create their own ecosystem. This activity is similar to the virtual aquarium. Stand still on the graffiti floor and watch in amazement as flowers bloom around you. As soon as you move they vanish. You can also draw and colour in your own flowers and animals to expand your ecosystem. But beware of the other animals – they could eat yours!

Future Park runs from 23 September to 31 January 2018 at the Watershed’s Jubilee Hall at the V&A Waterfront in Cape Town. It’s open Monday to Sunday, from 10am to 7pm. Later in 2018 the exhibition moves to Johannesburg. Details will be released closer to the time. Go to futureparksa.co.za for more info.

* Worried your child won’t get a chance to properly explore Future Park because of crowds? Don’t be. Demarcated time slots mean only a certain number of visitors are allowed in per session to avoid overcrowding.

Assistants are in attendance at the exhibition but children aren’t permitted without adult supervision. Tickets available from Computicket . Arrange tickets for school outings by calling 065-880-7257 or by emailing futurepark@media24.com.

The Future Park shop sells merchandise with your sketches, including T-shirts, caps, cups, bags and keyrings.

We live in a world where facts and fiction get blurred
In times of uncertainty you need journalism you can trust. For 14 free days, you can have access to a world of in-depth analyses, investigative journalism, top opinions and a range of features. Journalism strengthens democracy. Invest in the future today. Thereafter you will be billed R75 per month. You can cancel anytime and if you cancel within 14 days you won't be billed.
Subscribe to News24
Next on TrueLove
Enjoy endless spoils with the TRUELOVE Hair Box for just R399 - valued at R1600