South African rapper, AKA - whose real name is Kiernan Forbes - is officially off the market!

The Fela In Versace hitmaker took to his social media pages to make the announcement by posting a picture of his fiancé, Nelli Tembe’s left hand which had a stunning diamond band on the ring finger. 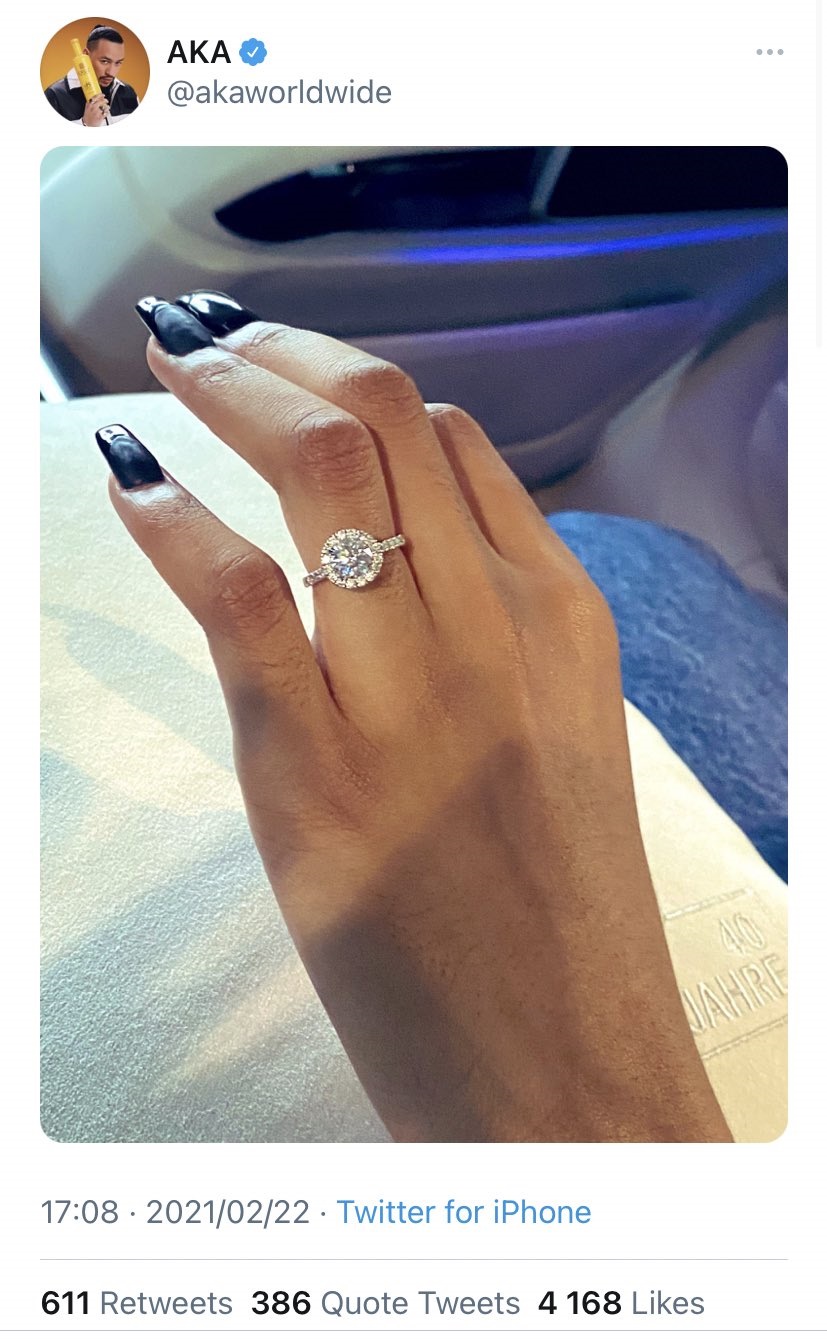 Posting the same picture on her Instagram account, Nellie revealed that she said yes and called AKA the “love of my life.”

“21/02/21 – on this day I said YES to the love of my life & best friend. Words can not describe how grateful I am to be your life partner, even through the highs & lows you have always stood by me & I thank you Kiernan Jarryd Forbes for loving me wholeheartedly & never giving up on US…,” she wrote. 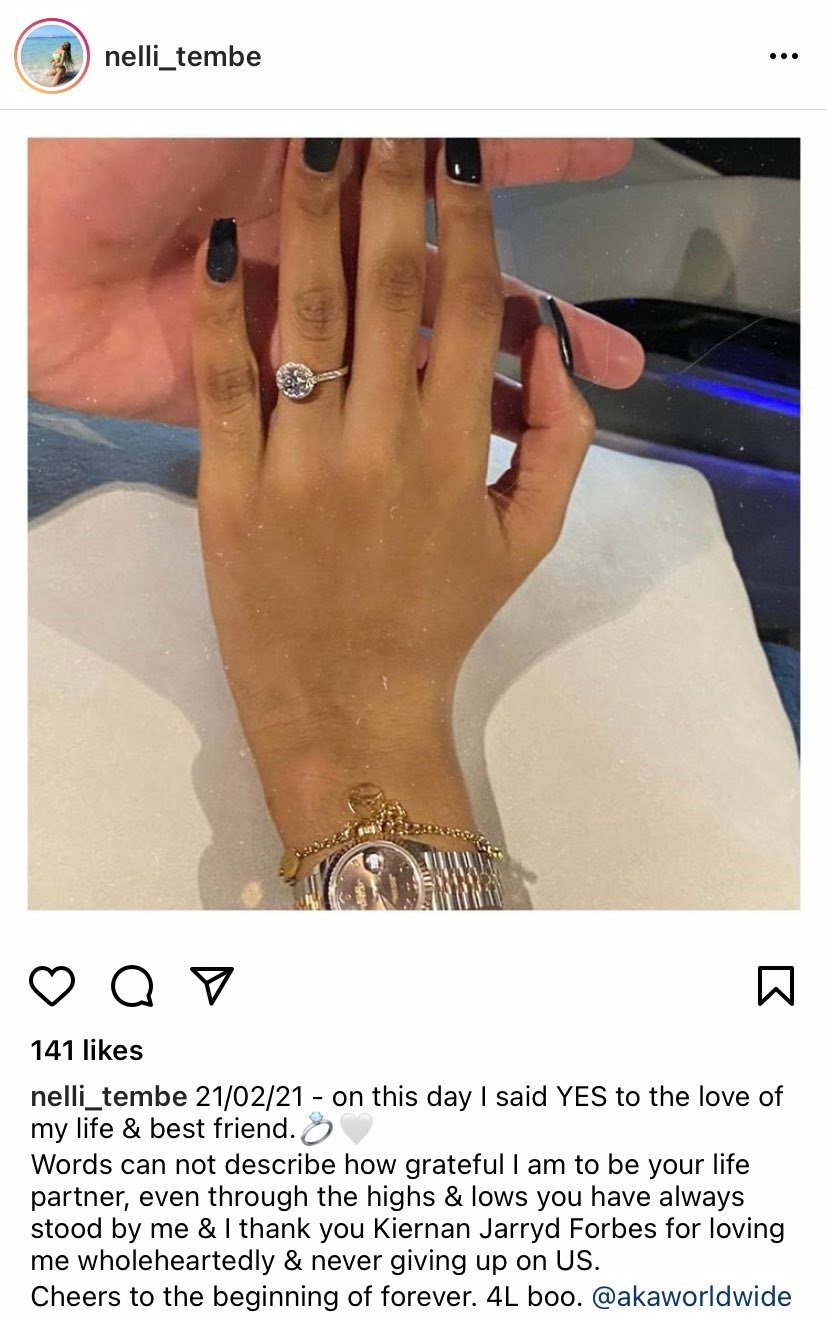 Soon after, both their comment sections were filled with congratulatory messages from fans and friends who wished the couple well.

AKA, who is known for loving loudly and making his relationships public, has been linked with celebrities such as DJ Zinhle, Bonang as well as Nicole Nyaba – but who exactly is Nelli Tembe?

Here’s what we know about the soon-to-be Mrs Forbes so far.

1. She is related to Nondumiso Tembe

According to reports, Nelli Tembe’s cousin is South African media personality Nondumiso Tembe who is an award-winning actress, singer, songwriter and dancer.

Nondumiso’s relation to Nelli trended when news of AKA and Nelli’s relationship first broke in 2020.

In the song Cross My Heart - which was released in his latest offering titled Bhovamania - AKA referenced Nelli’s age which he revealed is 21. At the time, AKA was 32, which means that the couple have an age difference of 11 years.

“I've been thinking 'bout you every twenty-one days, it's kinda ironic twenty-one is your age. I needed somebody who can give me my space. Only God can judge me, put respect on my name. Singing my praises make me feel like a King. But you ain't afraid to put me back in my place when I be stuck in my ways,” he rapped.

3. She features in one of AKA's songs

AKA features Nelli on his latest offering, Bhovamania on a song titled Finessin’. In the song, AKA praises Nelli, calls her a lioness and talks about their love. Nellie raps in the intro of the song.

Nellie’s Instagram page is private and she has less than 7 000 followers (you can only imagine how many requests she has!), which is why very little is known about her or what she does.

When one fan asked AKA if she would feature in one of his music videos, he responded by saying she’d never because of how private she is.

5. She’s been rumoured to have dated Drake

Nelli is rumoured to have dated Canadian rapper Drake back in 2016. But these are just rumours as neither Drake nor Nelli have confirmed this. Pictures of the two surfaced online after it was revealed that she is dating AKA.

Nelli's father is KZN-based businessman, Moses Tembe who is the Chairman of Phumelela Gaming & Leisure Ltd. He is also on the board of 9 other companies with interests in tourism, retail as well as industrial operations.

7. She attended a cookery course

Anele attended the Jackie Cameron School of Food and Wine where she enrolled for an 18-month-long cookery course between 2018 and 2019.  During this time she was also accepted to join the school's work placement segment at The Test Kitchen in Cape Town.

We live in a world where facts and fiction get blurred
In times of uncertainty you need journalism you can trust. For 14 free days, you can have access to a world of in-depth analyses, investigative journalism, top opinions and a range of features. Journalism strengthens democracy. Invest in the future today. Thereafter you will be billed R75 per month. You can cancel anytime and if you cancel within 14 days you won't be billed.
Subscribe to News24
Related Links
7 Romantic hotels worth checking out this month
Gallery | Michael B Jordan and Lori Harvey serve couple goals
Shooting your shot | 5 celeb couples that found love in the DMs
Next on TrueLove
Deborah Fraser finally buried following delay due to KZN floods