Bonang Matheba has claimed victory of her defamation lawsuit against podcaster Rea Gopane.

In 2021, Rea claimed Bonang had introduced rapper AKA to cocaine in his video podcast when discussing the untimely death of Anele ‘Nelli’ Tembe.

According to the lawyer’s letter shared on social media, on 9 May 2021 – when the widely circulated video was published – Bonang contacted Rea and asked him to publish a retraction and public apology, a request he initially failed to fulfil. With this, Bonang’s legal team served Rea with a R500 000 lawsuit. 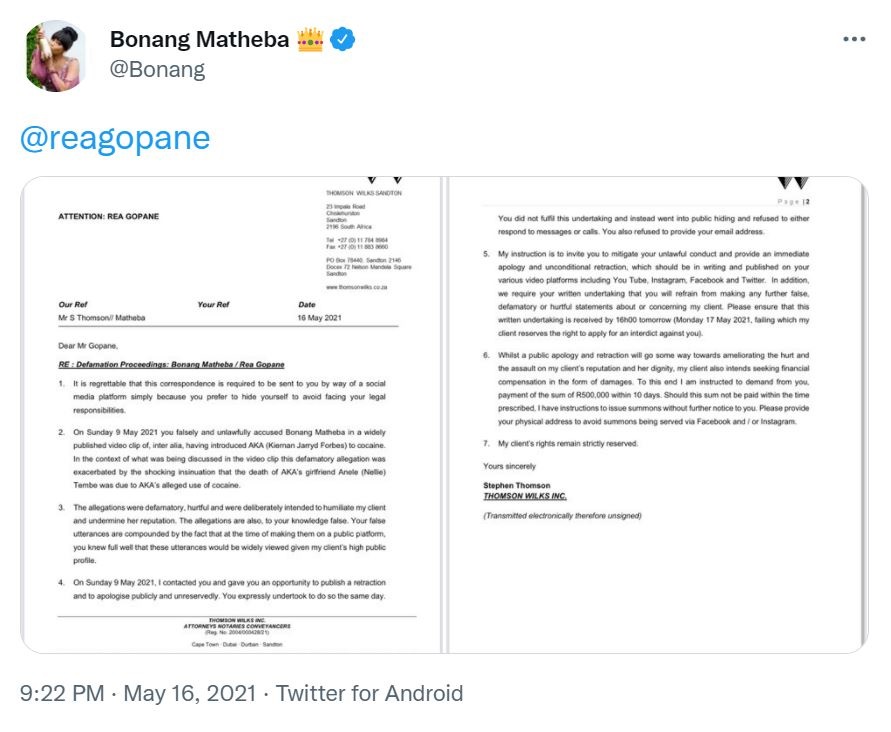 After being served with the lawsuit, Rea published an apology video addressing Bonang and other parties he mentioned in his podcast episode. In the video he says, “I’m deeply regretful of what I said and I now realise the harm that our podcast could cause and I’ve learnt from my mistake and I would definitely look to improve on my content going forward [sic].”

Even with this apology, Bonang pursued the matter in court requesting payment for damages.

However, as the court date approached the podcaster seemed nonchalant about the lawsuit. On 18 January 2022, Rea tweeted: “The incomparable Bonang Matheba is still mad she took a shot and missed last year. Thanks but I don’t need your good luck. See you soon mom”.

This was seemingly in response to Bonang’s tweet wishing him good luck, which followed her tweet where she wrote, “Courts are open. Time to rock.”

On 28 January 2022, Bonang took to social media to announce a victory in this matter. In a press release, Bonang says she welcomes the “vindicating” ruling. And adds, “I trust that this judgment be a lesson to individuals like Mr Gopane that there are consequences for abusing public platforms to defame and humiliate others.

“It is important that particularly as women our voices are used constructively to ensure that cyber bullying, untrue and inflammatory attack on any individuals reputation are not tolerated [sic].” After Bonang’s announcement about the ruling, Rea published a series of tweets with comments including, “I don’t have time for delusional women. Back to work” and exclaiming in a video he also shared on Twitter, “She’s not getting a cent from me”.

Bonang concluded that she will be donating the damages she was awarded to her foundation, the Bonang Matheba Foundation.

We live in a world where facts and fiction get blurred
In times of uncertainty you need journalism you can trust. For 14 free days, you can have access to a world of in-depth analyses, investigative journalism, top opinions and a range of features. Journalism strengthens democracy. Invest in the future today. Thereafter you will be billed R75 per month. You can cancel anytime and if you cancel within 14 days you won't be billed.
Subscribe to News24
Related Links
AKA's response to allegations of abuse in his relationship with Anele
Digital dysmorphia is on the rise - women share how they are navigating this phenomenon
4 things to consider before posting your child on social media
Next on TrueLove
GALLERY | Inside Miss SA runner-up Thato Mosehle’s traditional wedding