According to TMZ, the 73-year-old passed away at a New York hospital on Tuesday. He had been battling an unknown illness.

Talley began his career at Vogue in 1983 and was named the creative director of the fashion magazine, five years later in 1988. He later became the editor-at-large of the magazine. Instantly recognisable in his glamorous, flowing robes, the fashion icon was also known for advocating for diversity in the fashion industry. He also served as a judge on four seasons of America’s Next Top Model and was the author of two memoirs: A.L.T.: A Memoir and The Chiffon Trenches. In the books, he opened up about his history in fashion and how sexual abuse and race impacted his career, friendships and life.

Taking to Instagram to confirm the sad news, his PR agency, TAA PR, announced his passing and mentioned the legend’s achievements in their tribute.

“It is with great sadness we announce the passing of our dear friend and client, the indomitable Andre Leon Talley on January 18, 2022 in New York. Mr. Talley was the larger-than-life, longtime creative director at @voguemagazine during its rise to dominance as the world’s fashion bible…,” they began.

“…May God bless and keep you, Good Sir! You will forever be missed @andreltalley,” they concluded. Since the news of his passing, many of his industry peers, friends and fans have taken to social media to share their tributes.

Here’s what they had to say. 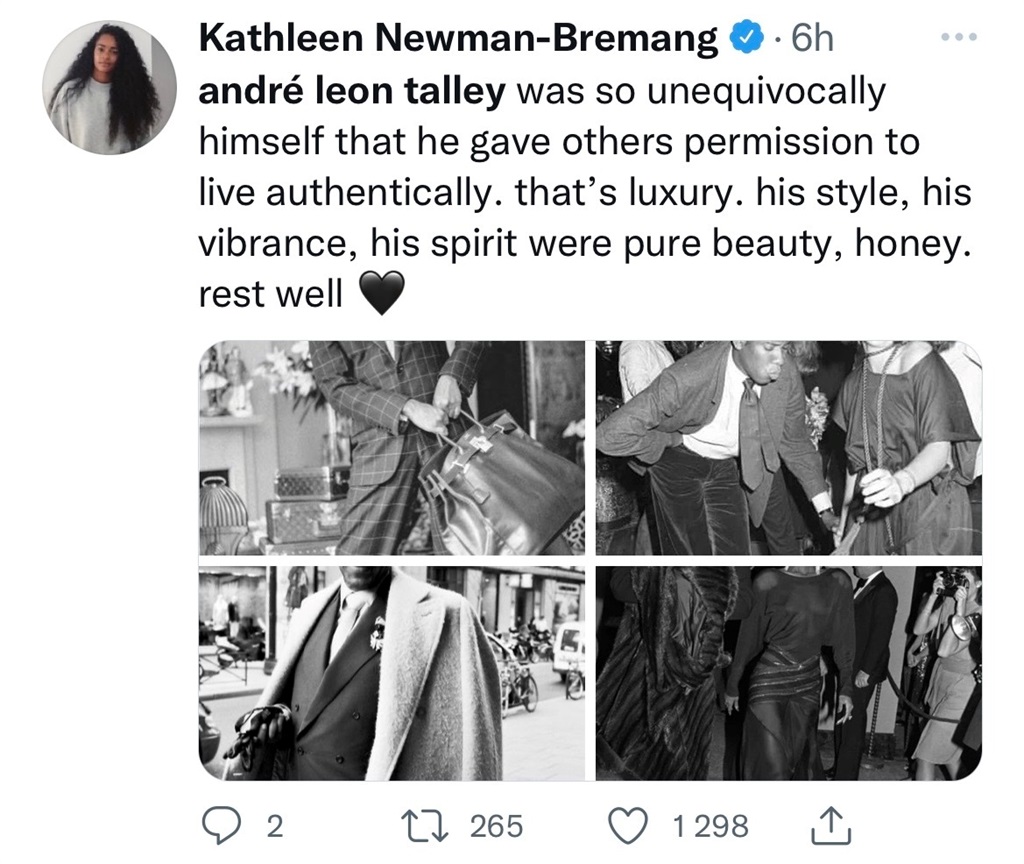 Twitter screenshot.
We live in a world where facts and fiction get blurred
In times of uncertainty you need journalism you can trust. For 14 free days, you can have access to a world of in-depth analyses, investigative journalism, top opinions and a range of features. Journalism strengthens democracy. Invest in the future today. Thereafter you will be billed R75 per month. You can cancel anytime and if you cancel within 14 days you won't be billed.
Subscribe to News24
Related Links
“Naledi Williers’ cause of death to be determined by postmortem” – family spokesperson
Shona Ferguson's family members share touching tributes to honour his memory
Tributes pour in for late actor Luzuko Nteleko
Next on TrueLove
'Leanne basically raised us' - Fans celebrate Leanne Manas' Knight of the National Order award