Nomcebo Zikode: “I have not been paid a cent by the label for Jerusalema” On Sunday morning, Jerusalema singer and songwriter, Nomcebo Zikode, spoke up about how the global success of Jerusalema hasn’t translated into money for her.

In a statement shared on her social media platforms, Nomcebo thanked fans for their continued support, and revealed that she allegedly hasn’t received a cent from the record label for Jerusalema.

I have been ridiculed, with efforts to marginalise my contribution
Nomcebo Zikode

“My voice and lyrics have transcended globally, but I still await what is due to me,” she said.

“I have not been paid a cent by the label for Jerusalema despite the song’s global success. I have been ridiculed, with efforts to marginalise my contribution. The continued love and support from the fans of Jerusalema has been my strength and anchor during this difficult time.”

She went on to say that as a female artist, she can’t stay silent on this matter anymore and that it is now with her lawyers.

READ MORE | Master KG on winning an MTV EMA: "I'd love to thank my sister, Nomcebo"

This comes just two weeks after Sunday World reported that Nomcebo had allegedly been sidelined by her record label, Open Mic Productions.

“She is not getting any bookings, they do not include her in anything, and they lie and blame it on the pandemic, but they have taken her bookings and given them to Zanda and you can quote me on that,” an insider source alleged that this was happening to Nomcebo.

In response to this allegation, Brenden Maseko, who’s a managing partner at Open Mic, told the publication that “at Open Mic, we support and promote each other; there is nothing unusual when Zanda performs Nomcebo’s song.” 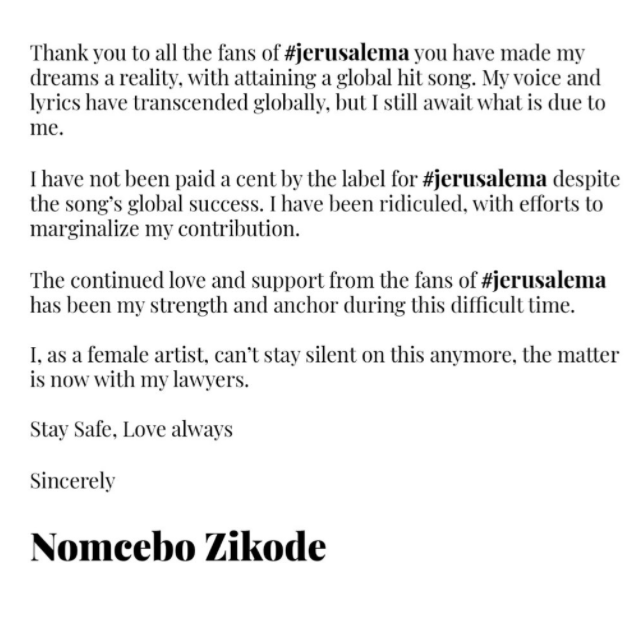 Nomcebo Zikode speaks out about 'Jerusalema'
We live in a world where facts and fiction get blurred
In times of uncertainty you need journalism you can trust. For only R75 per month, you have access to a world of in-depth analyses, investigative journalism, top opinions and a range of features. Journalism strengthens democracy. Invest in the future today.
Subscribe to News24
Next on TrueLove
“Naledi Williers’ cause of death to be determined by postmortem” – family spokesperson