On Monday, popular chef, author and TV personality Lesego Semenya - known as 'Les Da Chef' - has sadly passed away. Talent manager Miz Marcee, a friend of Semenya, took to Twitter to share the news of his passing.

It is with great pain that I have to share this: Chef Lesego Semenya @LesDaChef has passed away. Please keep his family and friends in your thoughts. We have lost a huge part of our heart. We will never be whole again. R.I.P Lesego pic.twitter.com/dhr6Khfd5n

The cause of his death is still unknown, but Semenya had been diagnosed with COVID-19 earlier this month. He had been documenting and sharing about his journey with the virus on his social media platforms. In the first tweet he shared about his diagnosis, Semenya commented about how he had followed all preventative protocol diligently, but still caught the virus.

"I double mask, I don't go anywhere, I keep far away from other humans," he wrote. "Had cancelled all public and private appearances, put most business on old, but here it is. Please don't take this virus lightly; now to fight this thing." His last tweet was about three days ago where he shared that it was his fifth day since his diagnosis.

"Still fighting this Covid demon whilst living with a comorbidity," he wrote. "I'm OK, loads of medication and keeping positive. Thank you to those who keep checking up on me. Dr reckons I've seen the worst of it now and it's just about recovery and rest now."

He was a celebrated and award-winning chef who released his first cookbook, titled Dijo: My Food, My Journey', in 2018.

Lesego Semenya was born and raised in Soweto. Whilst still working as a process engineer for The IQ Business Group he decided to pursue his personal passion and goals.

He began writing articles for a youth magazine called UnCut, the flagship magazine for an organisation called LoveLife. He left the corporate world in 2008 after 6 years to pursue his business goals. Lesego then went on to travel South Africa for a year before enrolling at South Africa’s best chef school, Prue Leith Chef's Academy in Centurion, to study towards becoming a chef. He qualified with a Grande Diploma in Food and Wine and 5 other international level diplomas in wine and patisserie.

He has subsequently gone on to work at The Westcliff under renowned chef Nicky Gibbs. In 2010 he took part in a World Cup pie designing competition run by the British High Commission where his pie, based on a township Kota, won and was named the Official pie of the visiting British football fans for the 2010 FIFA World Cup. The prize included working in a Michelin Star rated restaurant in London owned by Richard Corrigan.

Lesego has gone on to work as a personal chef for a renowned family in Irene, catered to Howard Buffett (Warren Buffett's son) annually, catered to The British High Commission as well as Liverpool FC. He has also catered to numerous South African celebrities as well as renowned international celebrities.

Until May 2014 Lesego worked at Richard Branson's private game reserve in the Sabi Sands before returning to his native city to begin focusing on building his business. He writes and talks about food regularly and tweets passionately about food as part of his mission to educate as many South Africans as possible about food and the culinary industry.?

Lesego was the official ambassador of the DStv Foodies campaign (2015), the face and co-collaborator for Singleton’s “Made with Taste” campaign (2016), a Top Chef South Africa judge (2016), an influencer for numerous whisky and food brands, a collaborator with UberEATS (2016/2017), the chef creator, food ambassador and influencer for SABMiller’s new beer Carver’s Weiss and Power FM’s resident chef.

In November 2018 Lesego's first ever cookbook titled Dijo: My Food, My Journey was released and has gone on to become a bestseller.

He often shared practical tips, insights and facts about food on his social media and many will remember him for his warm and welcoming spirit. His loved ones, family, friends and fans have taken to social media to share their heartfelt tributes to him. Let's take a look at some of these: 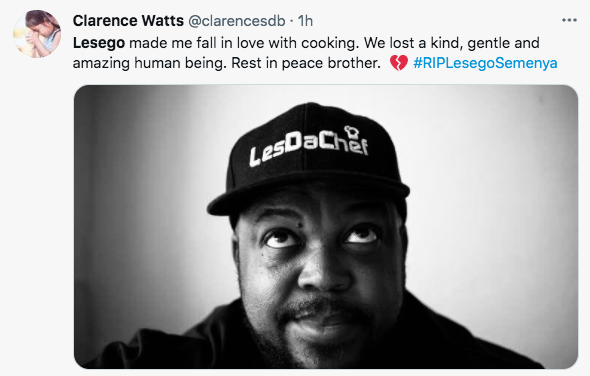 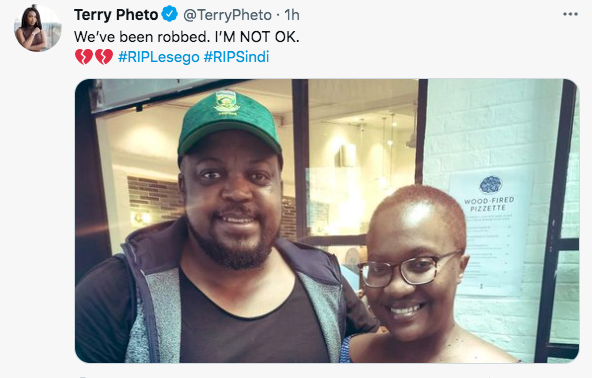 Twitter screenshot.
We live in a world where facts and fiction get blurred
In times of uncertainty you need journalism you can trust. For 14 free days, you can have access to a world of in-depth analyses, investigative journalism, top opinions and a range of features. Journalism strengthens democracy. Invest in the future today. Thereafter you will be billed R75 per month. You can cancel anytime and if you cancel within 14 days you won't be billed.
Subscribe to News24
Next on TrueLove
Colleagues bid Lawrence Maleka farewell as he closes his chapter on The River - 'Thank you for giving us Zolani'