Why do we support artists like Busta 929 who have questionable relationships with girls? Amapiano DJ and producer, Busta 929 – whose real name is Thapelo Theo Ndou – has found himself in hot water yet again after images of him being affectionate with an underage-looking girl surfaced on Twitter.

In one of the pictures, the Ngixolele hitmaker can be seen holding and kissing the young lady, who is reportedly only 17-years-old, on the cheek as she takes a mirror selfie. In another picture, she can be seen wearing the same dress and holding two bottles of alcohol in what looks like a hotel room.

Soon after the pictures emerged, social media outrage broke out and his name quickly topped the trends list on Twitter with many accusing him of being a paedophile. 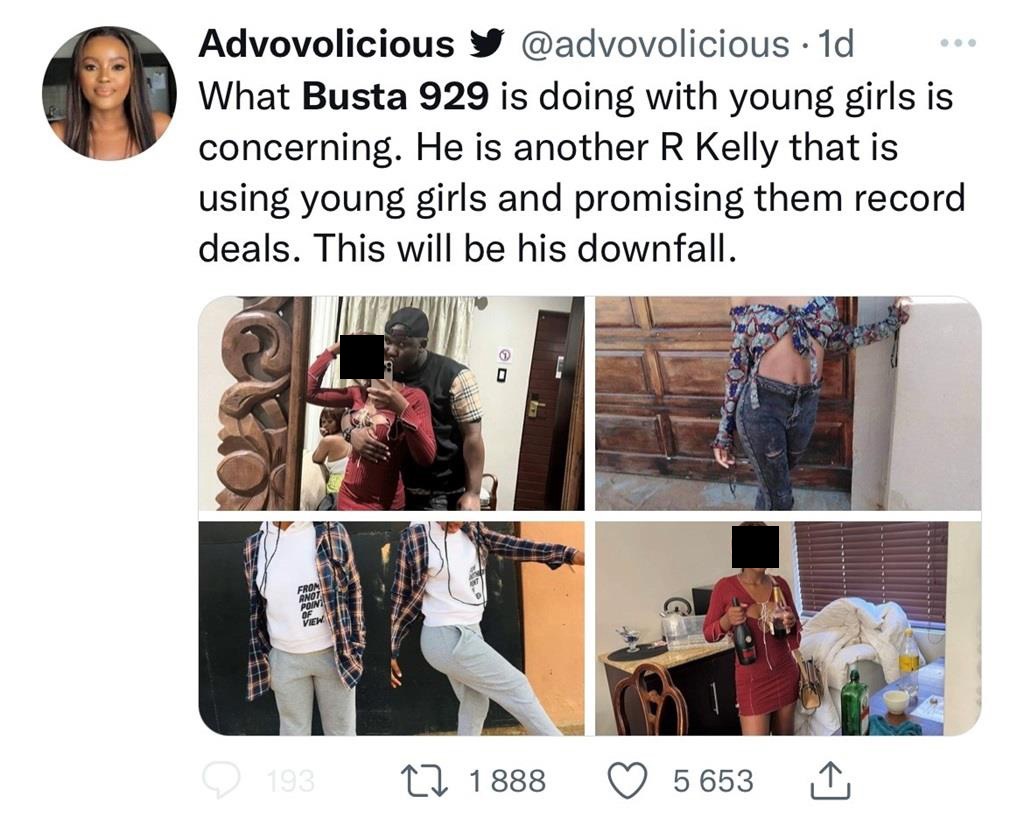 It is not the first time that the DJ, who is in his mid twenties, has been accused of dating young girls. In June 2021, he admitted to taking two 14-year-old girls home with him without their parents’ consent after playing at a gig in Mohlakeng, Randfontein.

He claimed through a statement that he had been recording music with the girls in the presence of his girlfriend.

“The team and I came across the young women whilst driving from a night out. Whilst having a conversation with them, one of the young ladies expressed interest in doing music with Busta 929. It is for this reason that we took her and her friends home with us,” he explained before saying that one of the girls who appeared in his live video was not fully dressed because she had just taken a shower.

“Furthermore, because ours is a home studio, and we’ve been recording for over two days, one of the young women went to take a shower at some point. It is for this only reason that she can be seen wearing a towel in the video. I want to assure everyone that nothing sinister was at play here, and everyone who was present can attest to this,” he continued to explain in the statement.

However, reports by The Citizen reveal that a person claiming to be the sister of the girls came out to dispute his claims and further alleged that he had kept the young girls in Sandton for a period of five days and not two, as his statement read last year.

When TRUELOVE approached Busta 929’s management company, Public Eye Media, for comment on this issue, a representative who refused to state their name, said that the company had no comment at this stage and declined to reveal whether a statement on this matter would be released at a later stage.

This is not the first time entertainment artists have used their influence to engage in questionable behaviour with young girls and women, with little to no accountability.

According to Rolling Stone, convicted sexual offender R Kelly’s album sales went up by 517 percent while his streams increased by 22 percent only a week after he was found guilty of racketeering, sexual exploitation of a child and kidnapping in 2021.

Similarly, filmmaker and actor, Woody Allen, who has been repeatedly accused of molesting his adoptive daughter when she was a child, denies all allegations and has never been charged.

Despite these allegations having surfaced from as early as 1992, actresses such as Scarlett Johansson and Diane Keaton have reportedly expressed that they believe him and would continue to work with him.

So, are there ever real consequences for artists like Busta 929 or do we actively play a role in them continuing to do dubious acts by supporting their craft?