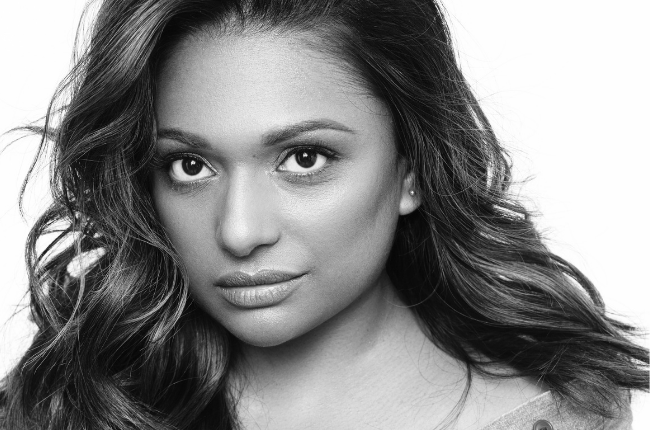 Durban-born Letticia Bissondut is an LA-based actress, humanitarian, self-taught photographer and creative director.  She is building a promising career in Hollywood and is determined to take over the small screen.

She was first enthralled by the TV industry in the corridors of AFDA while studying for a Bachelor of Arts degree in Acting.

After she graduated, she packed up her bags and moved to London, and studied further at The Actors Centre. The young actress, with a singular thought and love for acting, was unaware that her work ethic and thirst to see the world would teleport her across space and distance to the set of internationally acclaimed productions.

Her career as an actress is taking flight after being noticed by award-winning director, Tatia Pilvea. Her work includes several films and series, including Undress Me by Tatia Pilivea, Golden Lion winner at the prestigious Venice Film Festival. The short film was made for Show Times Masters of Sex and has garnered 49 million views and went viral within minutes of being released.

With an ambition to share her work with others, Letticia has also starred in the compelling hit TV series, Shameless. With the premiere of the ninth season on September 9, 2018, Shameless became the longest-running original scripted series in Showtime's history

We recently caught up with her to find out more about her career in the US and her plans for the future.

Can you tell us a bit about your background?

I was born in Durban and grew up in Johannesburg and have been based in Los Angeles for the last few years. I am an actor, and occasionally I find myself behind the camera too. I guess, for me, storytelling has always been my driving force.

What prompted the decision to leave SA for London and subsequently, the US, after graduating?

I think growing up I always dreamed of adventure and travelling. I knew being in different countries and experiencing different cultures has always been on the agenda. London came into my life very suddenly; I had just graduated from film school and finding work or even just auditions had been very rare for a few months. On a bit of a whim, I decided I wanted to go and four weeks later, I had my visa and was on a plane. I ended up at the Actors Centre and studied the Meisner technique and kind of fell in love with the craft of acting in a way in which I had never before. From there, I knew that I wanted to work in film and television more than stage. I ended up getting a bursary to an acting school in LA and went over as a student initially; while doing that, I had an agent see me in a showcase and sign me.

What are some of the challenges you've faced pursuing an acting career in another country?

Honestly, just being an immigrant can be overwhelming but worth it. Getting an acting visa/green card for the US is a very strict process, so that can be challenging sometimes. It's the least sexy part of the journey but the most important. I think being away from home is always hard and I say this as someone who loves LA. You hear a lot of noes so you have to build a thick skin and learn to not take things personally. I say all this to say that there will always be challenges but resilience and determination will get you through; knowing when to walk away is also an invaluable lesson.

What have been some of your key highlights throughout your journey?

LA is such an incredible city, with so many great cultures and experiences. I think when you first come over, you have to get used to doing normal everyday things with people who have been an inspiration to you while you were growing up. Like, going to the grocery store you can run into the Beckhams or Jared Leto. It's really bizarre.

You pretty quickly adapt and see that people are just people and become friends with a lot them. My favourite run in will forever and always be doing a spin class with Charlize Theron.I had been in LA for a couple of months and just came off working on my first acting job in the city and was feeling a little low and having one of those "am I actually where I am supposed to be moments?"; just in a space where I was really unsure of my journey. I was feeling a lot of anxiety and fear around it all. The class is about to start and I see this really beautiful woman in front of me, who feels kind of familiar but I can't really tell why. As the lights go low, I realise that it's one of my favourite actresses of all time and someone who has been one of my biggest inspirations (especially as a South African kid).

I eventually get through my class and was going to leave without saying anything because the last thing you want to do is bother someone when they are just trying to do an everyday task, like working out. But something inside me was like "dude, you will forever regret not saying hello" and so I did; it has been the only time I have ever said anything in all my time living in LA.

I truly believe that they (the youth) are our future

I was a total nerd and gushed and told her my 'one day when I meet Charlize' story. In my first year in film school, she won the Oscar for Monster and that put a fire inside me and steered me on the path that I had taken. She is one of the most kindest and gracious humans. She told me that "the thing that we South Africans have that sets us apart is resilience" and she also muttered some very lovely words about seeing me on a red carpet soon.

I gushed a lot more but her words about resilience have never left me. It also taught me that so much of what I experience in LA is not everyday occurrences for most people and holding onto the excitement and joy is really important because you can so easily become jaded.

Also just being on set and working with people who are - in most cases - the most talented in their respected fields is always a joy.

Can you take us through some of your most recent work/project(s) and what you think they are going to do for your career?

Sure, I got to work with William H Macy on Shameless, playing a character called Aisha. One project that kind of set a lot things in motion for me was when I was noticed by Golden Lion winning director, Tatia Pilivea. She cast me in a short film that was made for Show Times' Masters of Sex and it went viral and people still reference it when I book things or chat to them. I have worked on a number of international commercials and campaigns too, most recently being an Apple campaign and a film I did called The Wound. The film premiered at Hollyshorts and made the official selection, which has opened quite a few doors this year too. I was also recently cast in a recurring role in a series called Strangers Never Again, which should be released soon.

I think I have always just loved people and kids especially. I would beg my mom to adopt the neighbours kids when I was little, and just found myself volunteering with kids from a young age.

and the idea of being able to guide them and protect them is really important to me. I think it stems from being a kid during the end of apartheid and not really being able to advocate for myself. My biggest hope is to share that you can do anything you put your mind to, no matter where you come from. I have been incredibly blessed to have the most amazing and supportive parents on the planet, who have fought for my dreams just as much as I do (big shoutout to Rachael and Deena Bissondut aka mom + dad) but I know that so many kids don't have that, so the biggest goal is to not only share that story but also give them tangible steps to achieving that.

A few years ago, I did a test program with a group in a village in Malawi, teaching some Photography basics, giving them some knowledge on the business side and had them be my second shooters throughout the project I was shooting at the time. Some of them went on to start a photography business and one of them is even learning to be a cinematographer now. The healing that comes from creativity is something that also drives me. I know first hand how it has helped me deal with anxiety. So, I am in the process of setting up a non profit and figuring out ways to share this with kids all over the world.

Be adaptable because it almost never goes according to plan.

What are some of the biggest lessons you've learnt throughout your acting journey in the US?

That nothing that is for me will pass me by and to never take things personally. I think the industry can be fickle sometimes and it's easy to lose sight of why you are actually doing what you love. Letting go of things that don't serve you is important too and having a healthy mindset is key to flourishing.

What are your top three pieces of advice for someone looking to pursue an acting career in the US?

Do it! Work hard and have a strategy. And most importantly, be adaptable because it almost never goes according to plan.

We live in a world where facts and fiction get blurred
In times of uncertainty you need journalism you can trust. For only R75 per month, you have access to a world of in-depth analyses, investigative journalism, top opinions and a range of features. Journalism strengthens democracy. Invest in the future today.
Subscribe to News24
Next on TrueLove
Looting | How three black-owned small businesses were negatively affected