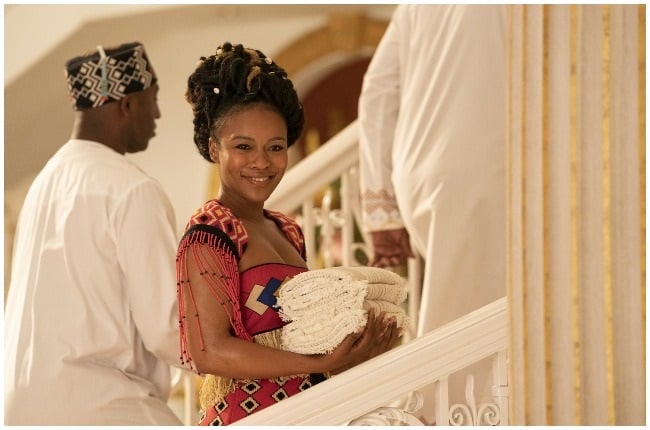 Actress, Nomzamo Mbatha is about to make her Hollywood debut in the sequel of the 80s classic movie, Coming 2 America and South Africans cannot be more proud.

The movie which will premier on Amazon Prime on Friday, 5 March will see the former Isibaya actress playing the role of Mirembe alongside veteran Hollywood actors such as Eddie Murphy, James Earl Jones and Wesley Snipes amongst others.

Read More| Q&A with Shonda Rhimes on one of her first Netflix original releases: Bridgerton

She spoke to TRUELOVE about her move to L.A, starring in the iconic film and more.

Please tell us how you felt when you were told you’d be part of Coming 2 America?

Oh My God, I was excited and could not believe it. I even cried because I got the news on my grandmother’s birthday. It was such a beautiful moment for me because making the move to L.A wasn’t easy. Going to auditions and trying to get this dream to come together wasn’t easy. To finally get the big yes through Coming 2 America was like okay, Nomzamo is coming to America!

How did the role come about? Did you have to audition or were you approached?

I wish I was approached! No, I definitely auditioned. I went through the whole process of being called into the audition room. I remember I was in Abu Dhabi, I left and flew back to L.A just to go to my audition. There was a long process to me getting the final yes – all the callbacks and all the meetings and just showing up for the moment was strenuous but totally worth it.

Please tell us more about your role and character in the film?

Her name is Mirembe. She’s smart, she’s charming, witty and quick with her tongue. She’s a traditional Zamunda woman but very unconventional because she doesn’t do what normal Zamunda women are expected to do. Most of them are expected to be maids in the palace but she’s a barber, so that’s pretty cool.

She knows so much about Zamunda and its culture, people and the history and so when the long lost son comes into Zamunda, he has a difficult time but she manages to calm him down a bit and her world changes. 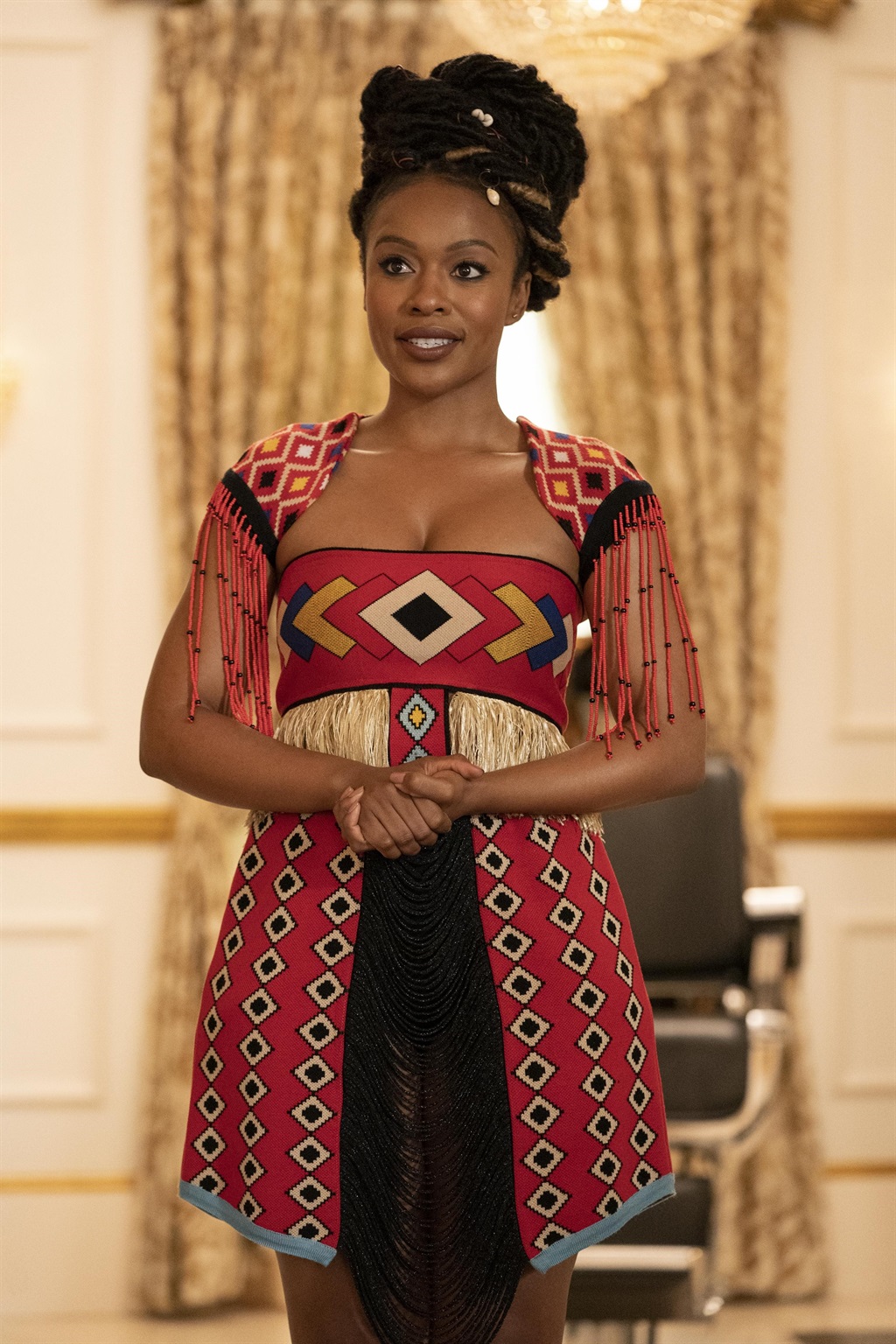 How challenging was it for you to portray Mirembe and to bring her to life?

There’s always going to be challenges because as an actress, you want to portray the character in the most truthful way. You want to find her rhythm and her essence and stick to that and not sway from it. So, there were those challenge but Craig - who is the director - was just so fantastic in that he really just gave me the freedom to be able to play in that space. I’d often have to ask myself ‘how would an African woman play this role?’ and just bring the language and texture into it but overall, I just had a good time.

You were also cast alongside veteran actors such as Eddie Murphy and Wesley Snipes amongst others. What was it like working with them and what would you say you learnt from them?

Oh my gosh! It was obviously a very daunting, outer body experience to be surrounded by Hollywood royalty. To be surrounded by people who have done so much to shift the medium in black culture and here I was, sharing a stage with them. It felt incredibly humbling, but I also had to move from being a fan to realizing that they were my colleagues and I had to be professional.

It felt like I was in a masterclass because I was watching them in character. They moved from being Prince Akeem and then to being just guys in the barbershop and then all of a sudden there’s Randy Watson performing on stage. They are all such great people and I was laughing the whole time, it was just such a beautiful experience to be part of it. 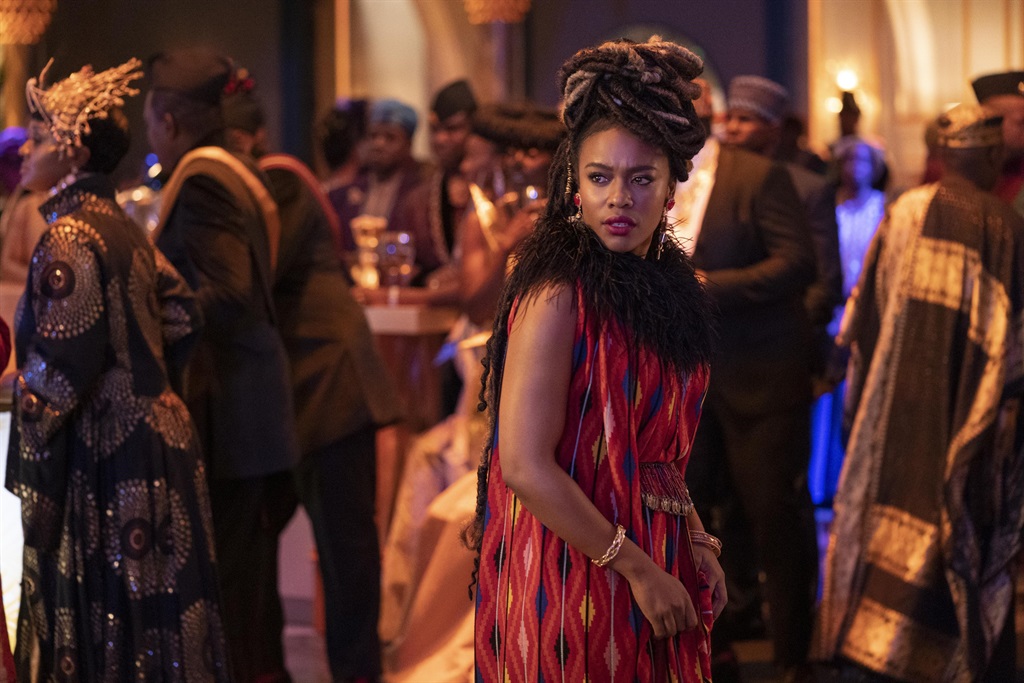 In the film you also wore clothing by South African designer, MaXhosa. What did this mean for you?

It was such a beautiful moment of African pride, that’s what it means to me. It wasn’t planned, it just happened and I was just so excited because he’s done so well for himself and this is a great moment for him as well. I’m so proud that the production could recruit African designers and showcase their talents.

The plan is to continue to put in the work and to continue to invest in the dream and make more series and make more television. I’m involved in a lot of projects at the moment that I’m very very excited about, the announcements will come when the time is right. There’s a film I’m shooting in Canada as well and I’m very excited about that and hopeful. I’m also doing a lot of work with my foundation which I’m very passionate about. Overall, it’s just putting in the work. Nomzamo Mbatha as Mirembe.
We live in a world where facts and fiction get blurred
In times of uncertainty you need journalism you can trust. For 14 free days, you can have access to a world of in-depth analyses, investigative journalism, top opinions and a range of features. Journalism strengthens democracy. Invest in the future today. Thereafter you will be billed R75 per month. You can cancel anytime and if you cancel within 14 days you won't be billed.
Subscribe to News24
Related Links
10 times Nomzamo Mbatha served us style goals
ICYMI: #BehindTheScenes when Nomzamo met Lewis Hamilton
WATCH | Thuso Mbedu shines in a lead role for an American series
Next on TrueLove
Rushda on joining RHOCPT - ‘People will enjoy my looks and unproblematic energy’