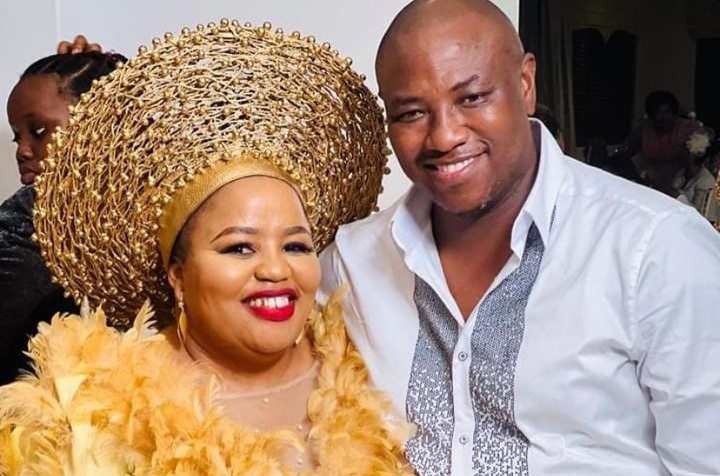 She's a private person by nature.

But with reality shows and now a presenting gig, she's had to step out of her comfort zone and embrace life in the spotlight.

Busisiwe 'MaCele' Mseleku never once imagined she would one day host a TV show.

Even being a reality show star on Uthando Nes’thembu still seems like a farfetched life because she is reserved and enjoys keeping her life private. But things have changed because MaCele is the new host of the Mzansi Wethu reality show Ezomshado, alongside her sister-wife Thobile 'MaKhumalo' Mseleku.

She is loving every moment of being able to help couples navigate through marital challenges.

“Being a host is different. But what is good about it is that all the stories are real and there is no faking. I am also allowed to be myself. Had the show required me to change, I would have struggled,” MaCele says.

The first episode was nerve-wracking yet exciting.

“We get a brief, and we take it from there and share our insight,“ she says.

“It’s nothing I’ve ever dreamt of doing. But I always knew that I wanted to speak to married people whether in seminars or workshops. I was thinking of speaking to women in polygamous marriages. But when this came up, I realise that marriage is marriage, no matter the set-up.”

READ MORE | 'Polygamy was an act of power' - Have shows like Uthando neS’thembu changed how we view the practice?

On the show, they discuss issues of infidelity, finances and in-laws, among many other marital topics.

“Even before the show, people would come to me for advice on cheating, stepchildren, mothers-in-law and husbands suddenly discussing polygamy. They would expect me to tell them to agree to polygamy and I usually say no because some of the women don’t seem ready, they never saw themselves in a polygamous marriage or some just don’t like sharing,” she says.

She doesn’t believe that she will ever get used to being on TV.

“I am very private about my life. I also don’t see myself as a celebrity. There are too many expectations of how you should live your life when you’re a celebrity, which is so different from who I am,” she says.

Being in the limelight hasn’t changed the humble, village girl.

“My values haven’t changed. I don’t want pressure from society or anyone. I remain true to myself and live my normal life. My life is also not a spectacle.”

MaCele says being in a polygamous marriage is a tough job on its own.

“Whether you are wife number one or number five, marriage is just not easy. Being a wife comes with tough responsibilities. There are high expectations of how to look, behave and handle situations. You need to see the kind of home and family you wish to marry into before and create the kind of marriage you would like yourself in your head before,” she says.

As the eldest sister-wife in the Mseleku household and working with the last wife, MaKhumalo, she says that she was pleasantly surprised by their on-screen chemistry.

“I enjoyed working with MaKhumalo on Ezomshado. There was chemistry and even when we disagreed, we stayed professional because it was not about us and our marriage,” she says.

Even the other sister-wives are wishing her well on her new venture as a TV host.

“When a person does something good, away from the family, I always wish them well. In a polygamous marriage, people think you don’t have your own life and own interest, but you also live separate lives. They are happy for me.”

READ MORE | “Marrying another woman is not my decision to make, but my wives” – Musa Mseleku

On 3 January 2019, she lost her mother. This year, she spent the day of her mother’s passing celebrating her life.

“I went home to my mother’s house Ezingolweni in KZN and slept there. This year, I want to prepare for her tombstone unveiling.”

She also plans to complete some unfinished business within her marriage of 20 years.

“My plans are too personal. There are things that I need to deal with in my marriage. This year we will be celebrating 21 years. Mseleku and I were supposed to have celebrated our 20th anniversary with a white wedding, but the plans were not met. This is weighing down on me. If we don’t correct this, I will have to make big decisions.

“It’s not about the dress. It’s about the principle, the promise and what it means to me. It will remind me of our love and union.”

But divorce is not an option for her, even if Musa were to get a fifth wife.

“When I got married, I told myself that I would be the first Cele woman to not have a failed marriage. I come from a home of women who leave when they are frustrated in a marriage. I refuse to leave no matter what. Divorce is not even on my vocabulary unless the other person wants it.”

We live in a world where facts and fiction get blurred
In times of uncertainty you need journalism you can trust. For 14 free days, you can have access to a world of in-depth analyses, investigative journalism, top opinions and a range of features. Journalism strengthens democracy. Invest in the future today. Thereafter you will be billed R75 per month. You can cancel anytime and if you cancel within 14 days you won't be billed.
Subscribe to News24
Next on TrueLove
5 minutes with Gomora’s Siphesihle Ndaba - 'I almost studied towards a Bachelor in Music'