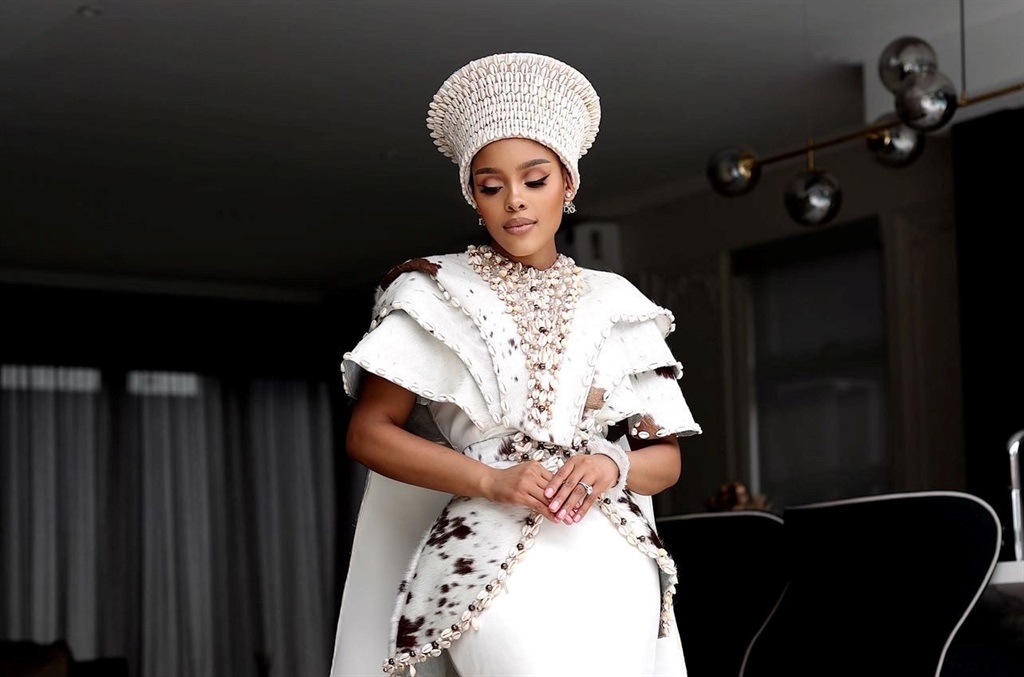 She almost broke the internet when she announced that she and her future groom had completed the lobola process.

Fashion and luxury content creator Kefilwe Mabote had the internet in a spin after sharing about her upcoming nuptials in a series of Instagram posts.

There were a lot of questions from fans. Who was the mysterious groom? How many cows? And they couldn't stop talking about her dress.

It is a cream-white floor-length gown, accessorised with a cow hide overskirt and cape, which are both adorned with cowrie shells. It is a creation by the “fashion designer to the stars,” Gert-Johan Coetzee.

Finishing off the look are bridal pumps and a hat in the shape of the isiZulu hat, isicholo - covered in cowrie shells by designer Anita Ferreira. On how she chose Gert to design her gown, Kefilwe tells TRUELOVE: “Gert is one of the best designers that I know especially because when I express the idea that I have in mind he’s able to take my words and draw them onto paper!

“Him and I work extremely well together. He understands my style and the look I want to get across. And on top of that, he puts a little more glam to my already beautiful design like a delicious cherry on top [of] a bowl of ice cream.”

She says her vision for the gown was influenced by two main factors.

“The first is because my husband is [Zulu] and my paternal side of the family is Zulu and I’m really proud of my culture.

“The second part is in African culture, especially in Zulu culture, when the man pays lobola, a cow or sheep gets slaughtered and the makoti wears the skin as a bracelet to resemble that you have been accepted by their family and have united the ancestors. It’s really such a beautiful culture! Rich of history,” she says.

On the vision she had for her gown, she says: “So, my vision came from exactly that. We designed the cow skin into my dress and African shells that I can proudly show to my new family. It’s a very modern-traditional dress. I believed Gert and I would be able to design something spectacular…. And we did!”

Gert says the approach he had for this gown was one of true collaboration. He tells us more about the design process.

Can you tell us a little bit about how the conversation started with you designing Kefilwe’s wedding gown?

It was not her wedding gown, it was the gown to commence her celebration. That conversation started about two months ago already where we really had a very specific idea for it. I think Kefilwe wanted to look very traditional and of course I wanted to bring my high fashion element.

What were the different inspirations you pull from for the design of the gown?

Of course, being a South African designer, I’m quite aware around the cultures, the respects to be paid around cultures and the spiritual, cultural significance about all these different cultures. So, I really wanted to reinforce that and show that.

I think that by using the cowrie shells, that was one of my key inspirations. The cow hide was, of course … Kefilwe specifically wanted something that looks like it’s wrapped around her like we would traditionally wrap a skin around the body to show respect and covering the shoulders and it just really playing on that element.

I mean, it was a complete collaboration between me and her, and she had such specific ideas of what she wanted. And then, of course, for me as Gert-Johan Coetzee I have my unique design style that I’m known for and I just implemented that being inspired by her and her ideas and who she is as a person and really tapping into her uniqueness as a person. You’ve created a number of other bridal gowns, please tell us about what your approach to coming up with the designs is and what considerations do you typically make that impact the wedding gown design?

Like I mention always is that collaboration is so important in different areas of life. I always try to really reflect person’s personality. Of course, as a designer I’ve got my design style and my aesthetic and the things and the quirks I’m known for – and that is something that I can’t help, that is something hat comes so naturally to me and the brand.

Whenever I collaborate with somebody, that is the part of me that shines through. It’s basically taking their personality and amplifying it and glamourising it and fantasising it and just really making it the best possible version that it could be. That is always my design style. I love working with people, I love showing their best sides and I just love creating fashion.

We live in a world where facts and fiction get blurred
In times of uncertainty you need journalism you can trust. For 14 free days, you can have access to a world of in-depth analyses, investigative journalism, top opinions and a range of features. Journalism strengthens democracy. Invest in the future today. Thereafter you will be billed R75 per month. You can cancel anytime and if you cancel within 14 days you won't be billed.
Subscribe to News24
Next on TrueLove
'I suppose not everyone takes pride in how they look' - Is it unacceptable to wear a bonnet in public?