For the historical purist, Silverton Siege is a movie that requires a slightly higher degree of suspension of disbelief but the story, the writing and acting, are refreshing. Besides, what’s the point of introducing a monumental history lesson with a powerful message and not envelope it in a good story?

TRUELOVE was invited to an exclusive premiere of Silverton Siege held at one of Johannesburg’s ‘national key points’, Monte Casino. We were treated to tasteful red carpet looks, beautifully placed and charming props from the film as our ‘set’ and friendly Volkskas tellers as our ushers.

Oh! And the First Lady, Dr Tshepo Motsepe, was there to deliver a keynote address, detailing the significance of this movie, the Silverton trio and their impact on the anti-apartheid movement.

I must admit I was sceptical when I first heard about this movie and read its announcement from a Netflix press notice. ‘Not another one… And I do hope it doesn’t have the K-word loosely littered around for shock effect, but let’s go.’ And so, we did.

To say that we are sleeping on Thabo Rametsi is an understatement. His credits continue to grow and, even though the mainstream witnessed his brilliance in movies like Kalushi, his Calvin Khumalo character in Silverton Siege channelled elements of Chadwick Boseman’s T’Challa, and the body and physicality of his scenes showed it.

“It’s just so important for us to always tell the stories of our people. If we don’t tell them, who is going to tell them?” Rametsi tells TRUELOVE at the film premiere. 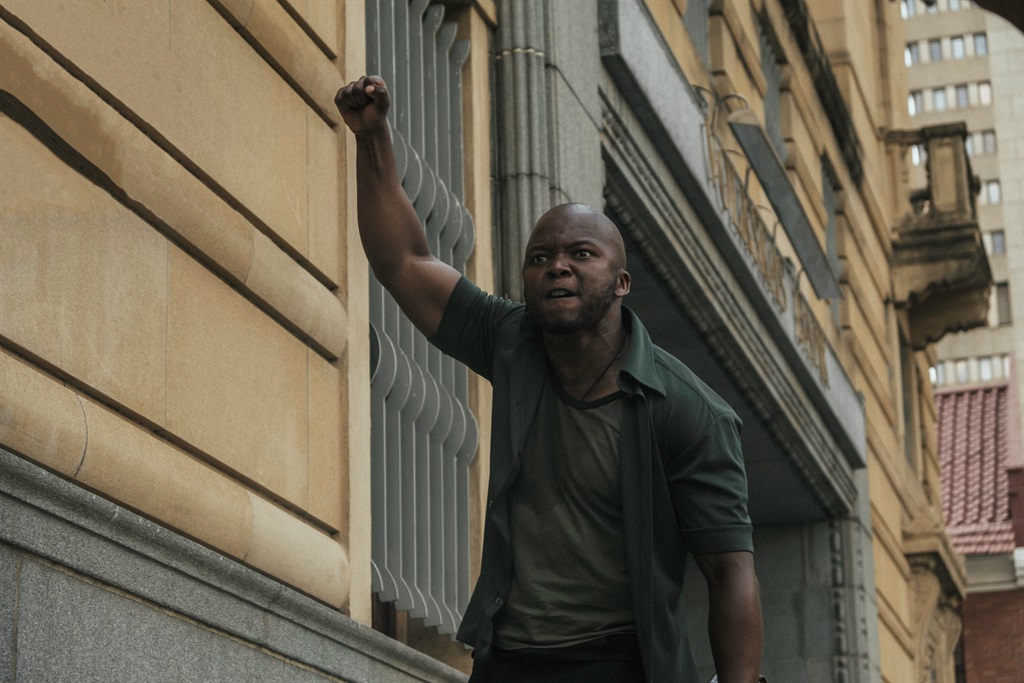 Not just for aesthetics but he truly delivered what I believe is one of the best, most energising performances in a struggle movie. Strong, empathetic, sympathetic, brave and vulnerable all at once, his performance is a testament to the importance of why it is imperative that we tell our stories, our way, and entrench our narrative into the world.

Noxolo Dlamini’s performance had me gushing and with every scene, her commanding presence shone through. Reminiscent of those powerful scenes we’ve seen of Angela Davis in the 60s and 70s. From slapping a foul-mouthed white man back into his place to triggering a tragic, timely, and devastating kill, which encapsulates her character’s turmoil, heartbreak, anger and understanding of the principles that informed her decision to be stuck in this bank. Never desperation, though. Never desperation.

At times, the pace of the movie waned a bit. The 1980 Silverton siege is documented as a six-hour showdown between police, negotiators, hostages and the trio, resulting in an inevitable turn of events on that fateful day, 25 January.

Understandably, there are historical discrepancies between what you’ll see on screen and what is on record, and the movie uses these gaps and lags to share glimpses of the characters; who they are, where they come from, what they’ve lost and what they’ve gained from joining the uMkhonto we Sizwe movement.

Erasmus says, “I was trained in theatre, so a lot of that is coming through, especially since I do a lot of dramatic stuff in theatre as well. So, I’m trying to bring a very different approach to action characters where it’s a little bit more subdued - a thinker. I think Aldo is very much a thinker.”

I also loved seeing and meeting international film star, Arnold Vosloo. His character as Captain Langerman glued the various characters that were in and outside the bank and delivered as an 80s Afrikaans-speaking detective caught between stopping ‘terrorists’ and saving lives, and with each passing minute, maybe everyone’s lives – including the trio’s. But there is always a villain and familiarly, it is the system. The inclusion of Dlamini’s character, Mbali “Terra” Mabunda is where one understands the objective of creative licence to seed inspiration, reflect and change thinking. Creator and director Mandla N Dube, and writer, Sabelo Mgidi, brought this.

In a time where we talk about the lionesses of the movement and the many young revolutionaries that followed their footsteps, it was important to reflect a woman’s role in the struggle - even if it means creating a fictional narrative and character that might upset a history buff or two.

It’s also especially important to appreciate this – particularly at a time when politicians talk of the year of Charlotte Maxeke, while the ANC Women’s League is recently disbanded. We need women warriors and activists – and Dlamini’s strength and dominance of her portrayal are joined by Michelle Mosalakae and Elani Dekker’s characters – all overlapping in ideals, vulnerability and being headstrong.

In a statement, Dube, states: “Silverton Siege is my strongest work thus far, the hope is that filmmakers from Africa are given more opportunities at decolonising the narrative of who we are. I also hope that the youth of today can draw inspiration from the Silverton Siege trio and know that they have the power to change the status quo, and most importantly, that their stories matter.”

We are indeed inspired, and sure you will be too, with a glorious purpose of a final scene. Watch Silverton Siege on Netflix.

We live in a world where facts and fiction get blurred
In times of uncertainty you need journalism you can trust. For 14 free days, you can have access to a world of in-depth analyses, investigative journalism, top opinions and a range of features. Journalism strengthens democracy. Invest in the future today. Thereafter you will be billed R75 per month. You can cancel anytime and if you cancel within 14 days you won't be billed.
Subscribe to News24
Next on TrueLove
Gaopalelwe Phalaetsile opens up about choosing to have an abortion at 19 years old