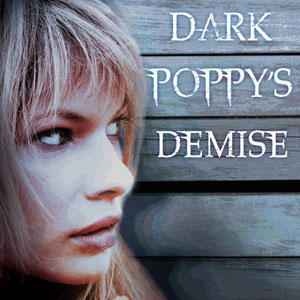 Dark Poppy's Demise by S.A. Partridge (Human & Rousseau)
16-year old Jenna is a self-centred, angst-ridden teen obsessed with getting the object of her affection to finally notice her. When he doesn't, she turns to her friends and the internet for comfort.

Being somewhat of an internet junkie, she doesn't hesitate when the ridiculously attractive Robert adds her as a friend on Facebook.

Ignoring every warning from those closest to her, she finds herself sucked into the vortex of a relationship that quickly spirals out of control and puts her very life in danger.

There's no denying that Young Adult fiction is a genre that is currently seems to be dominating the world of literature.  While literary snobs (I'm definitely NOT one of them) may balk at the very idea, no one can argue that this genre has done a lot in terms of getting younger kids and teens to read.

This is why I’m so happy to see that young, talented South African authors like Sally Partridge are delving into a genre that I believe will, without a doubt, do so much for our youth today.

With social networking and cell phone applications being so readily available to youngsters, Sally takes on a topic that concerns (and frightens) so many of us and does it with finesse.

For the most part, Jenna is a character that isn't very easy to like. Narcissistic, a regular drama queen and self-absorbed to a fault, she makes it very hard to engage the reader's sympathy.

Coming from a home with mostly absent parental figures, she carries all the angst of a teen forced to look after her brother and herself.  So of course, she does what any vulnerable young teen desperate for attention does; she allows herself to be taken in by pretty green eyes and striking good looks.

The trouble begins almost immediately - and it's here where we, as the reader, quickly become frustrated with Jenna.

This is where the brilliance in this novel lies.

Regardless of your feelings toward the main character, you won't be able to put the book down because you simply have to watch how it all unfolds. It's like trying to tear your eyes away from the scene of a fresh car accident: no matter how hard you try, your eyes will always revert back to the scene.

Sally has certainly written a book that will keep you on your toes. She has a keen insight into the psyche of teens and especially has a knack for creating damaged and broken characters.

The way she's written Jenna makes it easy for the reader to see how easy it is for young girls to fall prey to internet predators; even more so when there's no real parental supervision.  The book is a fast-paced and quick read filled with lots of snappy dialogue, gothic undertones and interesting characters.

My only criticism? I felt like certain parts of the book needed more of an expansion and that some of the dialogue between Jenna and Robert, felt a little like the reader should have been given a little more detail into some of their conversations during the beginning stages of their so-called relationship.

That aside, Dark Poppy's Demise is a book every parent, teen and young adult should read. I think there are far too little books that touch on subjects like these and I applaud Sally for writing a book that has needed to be written for a long time.

Want to know more about Sally? You can read my interview with her here.

We live in a world where facts and fiction get blurred
In times of uncertainty you need journalism you can trust. For only R75 per month, you have access to a world of in-depth analyses, investigative journalism, top opinions and a range of features. Journalism strengthens democracy. Invest in the future today.
Subscribe to News24
Related Links
Author interview: Sally Partridge
Wither
Next on W24
Golden Globes 2016: best and worst dressed

Subscribe to newsletters
Voting Booth
After 365 days in lockdown, in what way has your life changed the most?
Please select an option Oops! Something went wrong, please try again later.
Nothing's changed. Everything in my life became stagnant.
26% - 146 votes
I've focused more on making my house/apartment a more comfortable, beautiful place to call home.
10% - 59 votes
I don't think I could ever not work from home again. Remote work has saved me so much money.
17% - 96 votes
I just appreciate the people in my life more and take nothing for granted.
34% - 191 votes
I've developed a healthier relationship with alcohol.
5% - 29 votes
I've had to reconsider my career options after retrenchment.
8% - 48 votes
Previous Results
Fashion
Michael Kors 40th anniversary show captured the feeling of celebrations and...