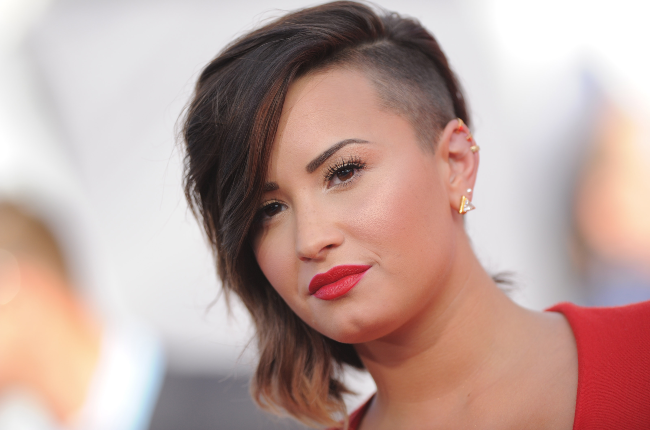 Demi Lovato refuses to live her life according to diet culture. The 'Confident' hit-maker refuses to exercise or count calories anymore but admits it is a different experience because she feels full of divine wisdom and cosmic guidance.

"Accidentally lost weight. I don't count calories anymore. I don't over exercise anymore. I don't restrict or purge ... And I especially ... don't live my life accordingly to the diet culture ... I've actually lost weight ... This is a different experience but I feel full. Not of food but of divine wisdom and cosmic guidance. Full of peace, serenity, joy and love today," she says on her Instagram reel post.

For years, Demi Lovato has been public about her fight to overcome bulimia, according to Insider. She's previously, in an interview with American Way magazine, revealed that she began binge-eating and purging at age 9. However she has overcome the eating disorder.

Meanwhile, the 28-year-old singer - who suffered a near-fatal overdose in July 2018, previously admitted that although it was painful journey for her, she doesn't regret anything and she's proud of the person she is today.

"Everything had to happen in order for me to learn the lessons that I learned. It was a painful journey, and I look back and sometimes I get sad when I think of the pain that I had to endure to overcome what I have, but I don't regret anything. I'm so proud of the person I am today. And I'm so proud that people get to see it in this documentary and I couldn't be more grateful that I had someone by my side."

We live in a world where facts and fiction get blurred
In times of uncertainty you need journalism you can trust. For 14 free days, you can have access to a world of in-depth analyses, investigative journalism, top opinions and a range of features. Journalism strengthens democracy. Invest in the future today. Thereafter you will be billed R75 per month. You can cancel anytime and if you cancel within 14 days you won't be billed.
Subscribe to News24
Related Links
Top tips for restoring healthy eating habits post-lockdown
Vegan diets are adding to malnutrition in wealthy countries
8 embarrassing diet side effects we really need to start talking about now
Next on W24
Khloe Kardashian says being organised turns her on: 'That's the best flirting you could ever give me'

Get the newsletter
Voting Booth
Do you think it's important to get married in this day and age?
Please select an option Oops! Something went wrong, please try again later.
Yes, it's important in order to create a family unit and for companionship
22% - 652 votes
Not at all. Being single is far more liberating
9% - 272 votes
There is no general answer to this, it's each to their own
50% - 1495 votes
Yes, society still frowns on unmarried people, especially women
1% - 40 votes
It depends on whether you are able to find a compatible partner
18% - 540 votes
Previous Results
Fashion
Louis Vuitton pays tribute to Virgil Abloh with Paris Fashion Week show held at...