The Euphoria star has admitted she suffers from anxiety, which she believes is made worse by the amount of pressure she puts on herself to succeed and not make a mistake.

She often finds herself calling her mum in the middle of the night for a chat.

“I think a lot of it stems from the pressure I put on myself, wanting to do my best and not make a mistake. I definitely don’t have it under control yet. I don’t have the key, so if anybody does, let me know,” Zendaya says speaking to InStyle Magazine.

Zendaya believes talking about her mental health helps to alleviate the symptoms.

READ MORE: Zendaya, Billie Eilish and Cardi B among these 10 most influential celebs in fashion

“I do find that talking about it is helpful, and that often means calling my mom in the middle of the night. Sometimes I make her sleep on the phone with me like a frickin’ baby,” she adds.

Previously, the actress admitted it's a "heavy responsibility" being a young black woman in Hollywood. "I have a heavy responsibility on my shoulders, but I'm appreciative for that because with that there's a lot of good that I can do and I know who is watching."

Related Links
Zendaya on being a role model: 'I have a heavy responsibility on my shoulders but I'm appreciative'
Film company behind Euphoria to auction costume and prop gems - including Rue's hoodie
Zendaya's Critics' Choice Awards Tom Ford breastplate was specially moulded to fit her body
Share
Next on W24
Runway to red carpet: Halle Berry, Charlize Theron, Cameron Diaz and more models who became actors 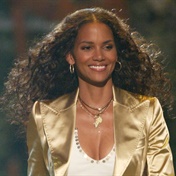