'He took a R14 000 flight to see me for our first date, then he asked me to move to Scotland with him' 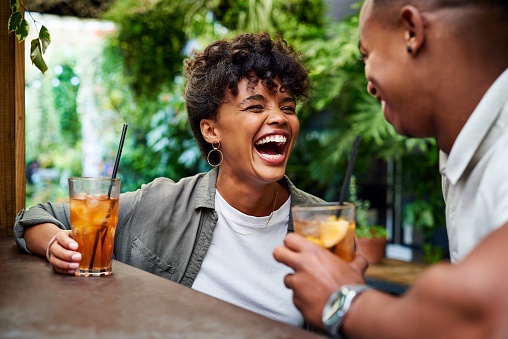 “I’m so glad I came to meet you,” he whispers in my ear as he gently loosens his embrace. He looks me dead in the eyes and smiles broadly — showing off his almost too-perfect teeth.  My heart is beating like a hummingbird on speed, and it feels fuller than ever.

We swiped on each other on Tinder about a month earlier. We chatted on Tinder, then WhatsApp, and finally spent many hours at night on WhatsApp calls. We hit it off immediately. His personality rung true to his bio: he was a positive and laid-back person with a voice as smooth as butter - I might have added the last bit.

The challenge is that he lives 14 000 km+ away, in Scotland. Born South African, he moved abroad several years ago to pursue a lucrative financial career — working for one of the top UK banks.

He did the ‘pay-to-swipe’ in South Africa option on Tinder as initially, he needed a date for his cousin’s wedding to be held in Cape Town this April. Technically, I could have easily swiped past him. Every day on Tinder is, after all, a game of Russian roulette — all about timing and luck.

I remember being at a wedding once where the bride, in her speech to her husband; she told him, “You feel like home.” That speech planted the notion that that someone else could make you feel that safe.

Being oceans apart literally doesn’t translate as ‘being home.’ And even though we both had this almost-palpable ‘good feeling’ about each other, I didn’t know how he moved. Or how he’d treat me when I acted on impulse or what his lips pressed to mine would feel like.

That bit, technology couldn’t tell you. After being in contact for more than a month, I started to grow frustrated at the prospect of only meeting him so far in the future. He’d send me daily reminders, counting down the days until we’d meet: 50 days. 49 days. All the while, thinking: don’t get over-excited.

It could very well be a dud. Then, one morning he calls me at work. “I have a surprise for you,” he said. He bought an extra ticket to come earlier. To meet me. A last-minute BA ticket for around R14 000.

I’ve never had a man fly across the country for me, let alone traverse continents! Though I was excited, this was a fair amount of pressure on our first date. Or for it to go well, that is! I told him that even though he’d be coming so far, I’d treat the date like any other.

“Babe, no pressure,” he said. “If it works, great. If not, we took a risk.” He arrived in Cape Town a few days later, and ii was the night for the anticipated first date. I arrived at the restaurant first. Just 1 minute behind me, there he was. Home? I wasn’t sure yet.

We ordered oysters as we said we would. They were awful. The service was non-existent, and the weather was just horrific. The Cape Doctor was, for sure, botching this operation. But it was all so perfect.

A few days later, after spending every waking minute together — being inseparable — he looks at me with kindness in his eyes once more and says, “I know we’re going at 1 000 miles an hour, but would you consider moving to Scotland, babe?” Home is wherever you are, baby.

I am still considering the offer — to go 'home'. Fortunately, he is going to work from Cape Town until after his cousin's wedding so I have time — if only a few weeks — to decide to honour cupid's aim or stick to my Tinder-swiping-and-hoping-for-the-best routine.

How would you react if you were in a whirlwind romance that required you to uproot your entire life? Share your thoughts with us here.

We live in a world where facts and fiction get blurred
In times of uncertainty you need journalism you can trust. For 14 free days, you can have access to a world of in-depth analyses, investigative journalism, top opinions and a range of features. Journalism strengthens democracy. Invest in the future today. Thereafter you will be billed R75 per month. You can cancel anytime and if you cancel within 14 days you won't be billed.
Subscribe to News24
Related Links
A panic button is one of the new safety features Tinder will be launching for their cyber...
Failed marriage proposal: 'I guess you wanna get married now?’ – Why these 6 women didn't marry...
I went on 3 different dates with 3 different guys in 1 day - this is what I learnt
Next on W24
Embracing the single life: 5 reasons women may choose to be single, according to an expert