Psychiatric technician, Cierra and  David's relationship reached a milestone in 2016 when they got married and spent the next two years in wedded bliss.

In 2019, Cierra (24) came out as bisexual to David (24) and they agreed to expand their relationship by including another woman.

"After realising my bisexuality and sitting down with my husband and talking about our relationship, we decided we felt comfortable with opening up our relationship to other women," says  Cierra.

In May 2019, they searched for the right woman on Tinder and, after exploring the dating scene with various women, met their match in Mariah Henderson (21) from California, USA. Cierra says the addition of Mariah in their relationship has strengthened her marriage and communication with David. While they couldn't be happier in their polyamorous relationship, after a few months of dating as a trio, they began to encounter jealousy between Cierra and Mariah, which caused them to split.

Two months later, they reconciled and have been smitten ever since. "David and I are husband and wife. We are both dating Mariah and there is both a physical and emotional relationship between all parties. Including Mariah in our lives has brought new perspectives, new hobbies and life experiences that would've been unexplored had another personality not been present," says  Cierra.

"To us, it means that we can share our love with not only one another but another person. We feel like our marriage is so full of love and feeling free to express ourselves, that this isn't something that negates from our relationship, but instead builds it and creates new forms of trust and respect." 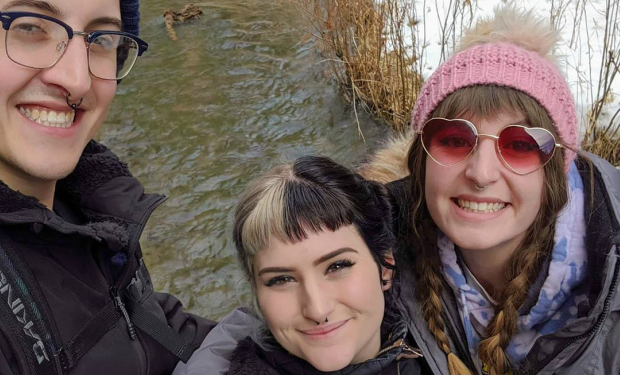 Their lifestyle isn't easy, nor is it for everyone, Cierra says.

"It has definitely been a learning experience and unfortunately, there aren't a lot of resources for throuples as there are for other ways of living or relationship struggles. We had separated for a short period of time about six months ago due to the jealousy I was feeling towards Mariah.

"But we worked through the negative feelings I was having and the toxic jealousy. We focussed instead on how happy I am to see two people I care immensely about having a wonderful time with one another and being there for me."

Cierra admits her family hasn't fully come to terms with her relationship and sexuality. "My family knows about our situation, and they are not accepting, but they are still loving of me. They don't agree with our lifestyle and my mum does have lots of questions," she says.

David's family is accepting and curiously loving, but still doubt the quality of the marriage. Mariah's family was very loving and appreciated her coming out to them but neither of her parents is accepting of the polyamorous relationship. "I get two people that console me after a bad day. I get to look forward to two texts every morning. I get to cry on two shoulders," Cierra says.

The throuple has also learnt to communicate through their issues.

"When any tinge of jealousy arises, we communicate to one another immediately. We try to check in with one another once a week to make sure no one feels left out or suffocated," says Cierra.

We also understand that because Mariah is not living with us and that we are married, there is an understanding that when she feels lonely or jealous, she can always reach out, video chat, or even stop by."

We live in a world where facts and fiction get blurred
In times of uncertainty you need journalism you can trust. For 14 free days, you can have access to a world of in-depth analyses, investigative journalism, top opinions and a range of features. Journalism strengthens democracy. Invest in the future today. Thereafter you will be billed R75 per month. You can cancel anytime and if you cancel within 14 days you won't be billed.
Subscribe to News24
Related Links
Soweto twins who were married to the same man for 9 years now single and praying for one man to...
'My plan to move to China to be with my fiancé is jeopardised' - SA woman in limbo due to Covid-19
Billie Eilish isn't attracted to people anymore as she's never felt powerful in a relationship
Next on Life
Tea as an aphrodisiac? Here's the right way to get hot and steamy this Valentine's Day