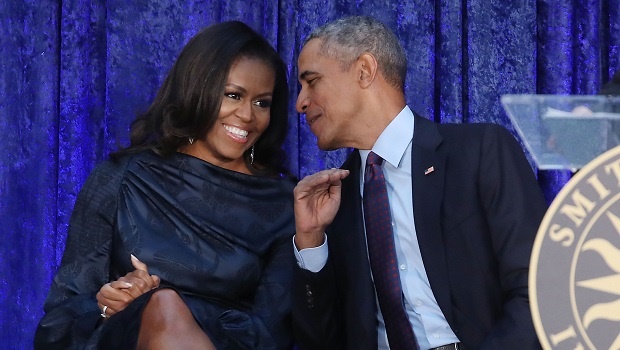 While everyone’s love life is different, there is something to be learned from those who have managed to make their relationships last. Michelle and Barack have definitely stood the test of time after being married for 26 years.

In her memoir Becoming, the former first lady reveals that she and her husband have seen a marriage counsellor multiple times.

Speaking to People Magazine she discussed how there are times in a marriage when you will want to quit and reassures young women that the feeling is normal.

“I want them to know that Michelle and Barack Obama - who have a phenomenal marriage and who love each other - we work on our marriage and we get help with our marriage when we need it,” she said speaking to Robin Roberts of Good Morning America.

Michelle's book tour has shown us the romantic side of the power couple that is seriously encouraging and makes us believe in true love again.

"Here’s a reminder of the books that I read this year that appeared on earlier lists: Becoming by Michelle Obama (obviously my favorite!)," he wrote.

Barack supports Michelle on her book release, calling her "brilliant, funny and wise".

Of course, @MichelleObama's my wife, so I'm a little biased here. But she also happens to be brilliant, funny, wise – one of a kind. This book tells her quintessentially American story. I love it because it faithfully reflects the woman I have loved for so long.

As Michelle was promoting her memoir, the former U.S president decided to surprise her by physically dropping off flowers onstage, just for her. Long story short, she enjoyed the romantic treat.

Look who dropped by tonight! ?? #IAmBecoming

Their love is heart-warming and they appear to be still madly in love. These are some of the romantic gestures we learn from the most admired woman in the U.S and her husband:

They celebrate each other’s birthdays

Barack sent Michelle flowers on her birthday and she was genuinely surprised and excited.

Thank you @BarackObama for the beautiful flowers waiting for me in the office this morning. You’re my best friend, biggest fan, and getting notes and flowers from you will never get old. And to the many people from around the country who sent cards and posted on social media, you have no idea how much we love hearing from you. I know birthdays can sometimes be bittersweet (54!), but your messages of hope, generosity, and warmth have always reminded me how lucky and blessed we are.

He went on to dedicate a beautiful message to her on Instagram, telling her and the world just how much he admires her.

You're not only my wife and the mother of my children, you're my best friend. I love your strength, your grace, and your determination. And I love you more each day. Happy Birthday, @MichelleObama

Michelle sent her hubby a sweet message wishing him a happy birthday. “The view is always better with you,” she wrote.

Happy birthday @BarackObama! The view is always better with you.

Michelle is Barack’s favourite person to see in the world and he’s not afraid to tell the world.

Happy Anniversary, @MichelleObama. For 26 years, you’ve been an extraordinary partner, someone who can always make me laugh, and my favorite person to see the world with.

I almost cried when Barack sent Michelle a heartfelt tribute on their 26th anniversary.

Happy Anniversary, @MichelleObama. For 26 years, you’ve been an extraordinary partner, someone who can always make me laugh, and my favorite person to see the world with.

“I can’t imagine going on this wild ride with anybody else,” Michelle wrote with a picture of their wedding Day in 1992. And yes, I'm crying.

You can’t tell it from this photo, but Barack woke up on our wedding day in October, 1992 with a nasty head cold. Somehow, by the time I met him at the altar, it had miraculously disappeared and we ended up dancing almost all night. Twenty five years later, we’re still having fun, while also doing the hard work to build our partnership and support each other as individuals. I can’t imagine going on this wild ride with anybody else.

Michelle created a memorable playlist especially for him on Valentine’s Day.

“To celebrate the occasion, I’m dedicating a little valentine’s Day playlist to you”. How adorable is this?

Happy #ValentinesDay to my one and only, @BarackObama. To celebrate the occasion, I’m dedicating a little Valentine’s Day playlist to you! Click the link in my bio to hear the playlist. ??????

“You make every day and every place better,” wrote Barack in a sweet Valentine’s Day message to Michelle.

READ MORE: Michelle Obama and George W. Bush are friendship goals we did not see coming

Happy Valentine’s Day, @MichelleObama. You make every day and every place better.

The two never neglect to sneak in a quick kiss, a warm hug or simply holding hands in the presence of others, and we honestly don't mind.

Home has always been where our family is...It hasn’t mattered whether we’re lounging on a couch in Chicago’s Hyde Park or, as we are here, in the White House. We did our best to make the White House a comfortable place where our girls could climb trees and host slumber parties, where we’d have dinner together as a family, and where we tried to live by the values our parents instilled in us.

We live in a world where facts and fiction get blurred
In times of uncertainty you need journalism you can trust. For only R75 per month, you have access to a world of in-depth analyses, investigative journalism, top opinions and a range of features. Journalism strengthens democracy. Invest in the future today.
Subscribe to News24
Related Links
The most hilarious celebrity fashion memes of this year
"Free to do whatever" - Michelle Obama wows the internet with her iridescent Balenciaga thigh...
Michelle Obama’s letter to her younger self: "You're more than enough"
Next on W24
Can you love someone too much?