Durban born, 24-year-old, Lumkokazi Makhasi gifted her boyfriend Mawetu Matyila, a gift that had Twitter users gushing over just how sweet the gesture was. The couple is expecting a baby together.

The gift is three framed tweets that she screenshot from Mawetu's late brother's timeline Hlubi from between 2012 and 2014. The 30-year-old social media specialist, took to twitter to post the gift he received, and twitter was found gushing over this beautiful gesture.

My girlfriend found these tweets from my late brother, printed and framed them as a reminder that he’s looking out for me and proud of me. ????

Hlubi, passed away in 2017, through a car accident and being close to him, this was a devastating moment for Mawetu. The soon to be strategic brand communications graduate, thought of this gift to relieve her boyfriend of the stress he's been experiencing.

"Mawetu has been stressed a lot lately, because of the birth of his first child, he was on edge and said he wishes he could talk to his brother and get advice. I looked for something that I thought his brother would say to cheer him up and then found the tweets on his timeline," Lumkokazi says. READ MORE: Woman surprises partner with wedding after 5 years of being engaged - 'I never for a second worried that Daniel wouldn’t love this

Although Lumkokazi has never met Hlubi, through conversation, she learned the importance of Hlubi in Mawetu's life, and when preparing the gift, the only thing that was going through her mind was hoping that he likes the gift.

"It wasn't about me. I first gave him the sneakers [that I bought for him], but then I thought he could get shoes from anyone else. I just wanted to show appreciation to him because I love him," She adds.

When Lumkokazi gave her boyfriend the gift, his reaction was priceless and unforgettable. "His eyes became red the moment he saw the gift and he tried to hold back the tears. We both became so emotional," she says.

The Capetonian was taken back by the thoughtful gift, and in his words, "The thug in me left, I became a marshmallow. Couples can buy each other materialistic gifts; however, this was sentimental." 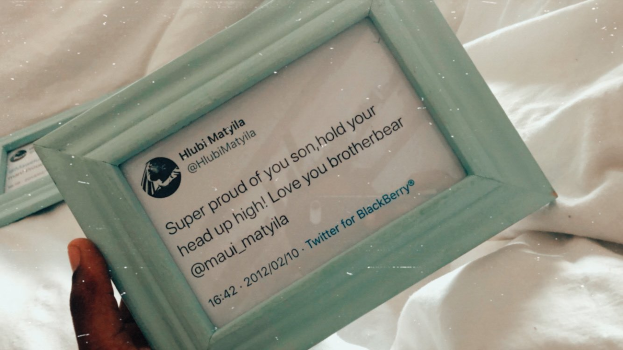 Lumkokazi had a different plan for handing over the gift, however, due to excitement she could not follow up with her plan.

"I hadn't seen him for a month and had planned to gift him on Valentine's Day, but when he picked me up from the airport, I figured this was the right moment," she explains.

"I waited until we got home and then decided to give him the gift." The couple met on social media, though good-natured banter over YouTube star Mihlali, where Mawetu took the opportunity to shoot his shot and said: "Forget about Mihlali and come over to my place for dinner." The rest is history.

Describing the relationship, Lumkokazi says her partner is her best friend and, Mawetu, says they became friends before lovers.

"Lumkokazi is a caring soul and someone I'm comfortable around," he says.

This gift is just one of the many gifts the couple has bought each other - but may well be one of the most sentimental. Lumkokazi considers herself a creative gift giver.

The couple enjoys spending quality time together and always find something to do, on different days when they're not out for dinner, Lumkokazi makes dinner, invites their friends over, some days when it's just two of them, they camp out in the lounge.

The song that describes their relationship best is the track Loyal by PartyNextDoor featuring Drake.

Looking at iconic relationships, they consider themselves as a Jada Pinkett-Smith and Will Smith kind of couple because they are more like friends.

What thoughtful gift has your partner given you? Tell us here.

We live in a world where facts and fiction get blurred
In times of uncertainty you need journalism you can trust. For 14 free days, you can have access to a world of in-depth analyses, investigative journalism, top opinions and a range of features. Journalism strengthens democracy. Invest in the future today. Thereafter you will be billed R75 per month. You can cancel anytime and if you cancel within 14 days you won't be billed.
Subscribe to News24
Related Links
'He showed up drunk, tried to sell his phone to the restaurant manager to pay for our dinner,...
Last minute Valentine's Day gift ideas for him, her, and most importantly, you
'Dating a bisexual man is like being with any other guy' - you might be missing out on great...
Next on W24
Is your once exciting relationship dull and boring? Here are 10 tips to reignite the romance

Get the newsletter
Voting Booth
Do you think it's important to get married in this day and age?
Please select an option Oops! Something went wrong, please try again later.
Yes, it's important in order to create a family unit and for companionship
22% - 668 votes
Not at all. Being single is far more liberating
9% - 276 votes
There is no general answer to this, it's each to their own
50% - 1527 votes
Yes, society still frowns on unmarried people, especially women
1% - 40 votes
It depends on whether you are able to find a compatible partner
18% - 551 votes
Previous Results
Fashion
Dior transports audience to seaside garden for its latest menswear collection...