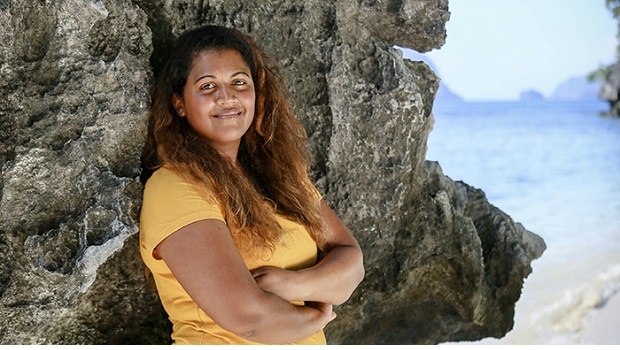 When Murishca Martheze describes herself, she says, “I’m a normal girl who wants to do something awesome.” That awesome thing? Survivor South Africa: Philippines – a chance for this 34 year old to truly get outside her comfort zone. And lose a little weight in the process…

Besides a bit of netball in her school days, Murishca never really did any physical activity. Sugary foods were her weakness. “For me [the challenge] is definitely not eating at night – and no sugar,” says Murishca.

After a devastating miscarriage last year, she felt she’d lost control of her life, and was also losing the battle with her weight. “It was traumatic and I just wanted to do something totally outside of my comfort zone,” she explains. It led to a leap of faith: sending a video entry to Survivor South Africa: Philippines. “I didn’t think they would like [my entry video],” she says. But they did. And after many interviews, and a series of physical and psychological assessments, she was told she had a month to prepare for Survivor. “Each of us entered for different reasons. My personal reason was to lose weight, but also to do something that pushed me physically,” she says. The goal: to lose 10 kilos.

Murishca made some pre-emptive lifestyle changes so she wouldn’t be in total shock once the tapes started rolling. “I stopped caffeine and sugar so I wouldn’t be super moody [on the island],” she says. Without those vices on the island, she felt the best she’s ever felt in her life.

During the game, contestants only got food from what they could forage for themselves on the island and what they won in challenges. “I was lucky because I was part of the winning tribe, so we had a lot of veg to begin with,” says Murishca. Their tribe also won a bag of rice in the first challenge.

READ MORE: Are you making this huge weight loss mistake? “We would have one portion of rice a day. We’d use one cup and split it between nine people,” she says. Now even the thought of rice makes her feel sick. “I don’t even like sushi anymore!” Murishca exclaims.

“Some of the guys ate mussels and caught fish, but I was scared I’d get sick from eating foreign seafood,” she says. For breakfast and lunch, she’d share a banana with two other women, but the island bananas left much to be desired… The result: Murishca lost a massive five kilos during those 13 days.

READ MORE: Which is better for weight loss: fruits or veggies?

In the month before Survivor South Africa: Philippines, Murishca joined the gym. “I needed to do some sort of work,” she says. “I was the second most unfit person on the island. Because of my low fitness level, every challenge in Survivor was the most trying and exhausting thing I’ve ever done.”

The Survivor challenges are just that – challenging. But throw in dizziness and nausea from lack of food and these tasks become next-level tough.

“My breaking point was the challenge where we had to stack huge blocks in a tower formation,” admits Murishca. The tower kept falling down, and under a hot baking sun with no water on hand, it became a gruelling physical test. “I felt myself wanting to faint,” she says. “But I couldn’t give up for the sake of my tribe – and myself.” Murishca kept it together until the challenge was complete and the tribe had celebrated their win. “Then I politely conked over, where the medics attended to me,” she laughs.

READ MORE: 9 things you’re not doing in your kitchen that lead to weight loss After 13 days of rice and sickly-sweet bananas, your first meal off the island is definitely a much-anticipated one. “Pizza, pizza and more pizza,” says Murishca. “I swallowed six slices of pizza in under 10 minutes.”

“I’m still two kilos lighter [than I was before Survivor],” says Murishca. This is to be expected after starving for so long and returning to the land of plenty. “Also, since the show, I’ve had a sudden need for chips almost daily,” she adds but, inspired by the island lifestyle, Murishca has embarked on the 8-Hour Diet. This means she can only eat between 8am and 4pm, a form of intermittent fasting. “We would stop eating very early in the day on the island,” she says, “and I know it helped me conquer the bloated feeling I’ve been living with for years!”

There’s a Survivor SA: Philippines finale reunion show in August. “I want to look amazing for that,” she says. “I’ve already bought my dress!” To achieve her goal weight, she’s signed up with a personal trainer to push her and keep her motivated. “My strict fitness regime began in June – I committed to weekly sessions with my trainer,” she says. Murishca’s made a great start – and we’ll be checking in with her throughout her weight-loss journey. Stay tuned for more…

We live in a world where facts and fiction get blurred
In times of uncertainty you need journalism you can trust. For 14 free days, you can have access to a world of in-depth analyses, investigative journalism, top opinions and a range of features. Journalism strengthens democracy. Invest in the future today. Thereafter you will be billed R75 per month. You can cancel anytime and if you cancel within 14 days you won't be billed.
Subscribe to News24
Related Links
How I lost 60 kilos in just two years
The 9 best apps for your weight loss needs, according to experts
Okay, What Is Your Metabolism — And Can You Actually Make It Faster?
Next on W24
Social media 'likes' found to positively influence healthy food choices