Rape and gender-based violence are some of the most prevalent crimes in South Africa. According to the crime stats released, there are 110 reported rape cases that have happened per day in the past year.

While a lot of conversations are being held about what needs to be done about these chilling statistics, one group of people is turning to practical solutions to increase sexual and gender-based violence awareness, and to cut the driving motifs of this violence at the roots.

Recently, representatives of the charity organisation, Action Breaks Silence (ABS), facilitated a self-defence class for girls around the ages of 11 at a primary school in Soweto. According to EWN.co.za, the young girls were told to imagine that the padded target is a perpetrator and to attack fiercely and relentlessly. Among the representatives that were training the girls was Dimakatso Monokoli and she spoke to us about training the young warriors.

Dimakatso explains that the programme runs for six weeks and they spend an hour every week with children in grade 4 and 5. During this time, Dimakatso and her team teach young girls how to defend and stand up for themselves in a society that often takes advantage of their being meek. This not only ensure that girls know how to defend themselves, Dimakatso says, but that girls ultimately feel more confident and brave.

"Girls are feeling empowered," says Dimakatso. "They’ve got their self-esteem intact. They see things differently now: abuse is abuse and it’s not their fault. They believe in themselves no matter what circumstances or background they’re from. They become warriors and they go back to their communities being able to stand up for themselves." 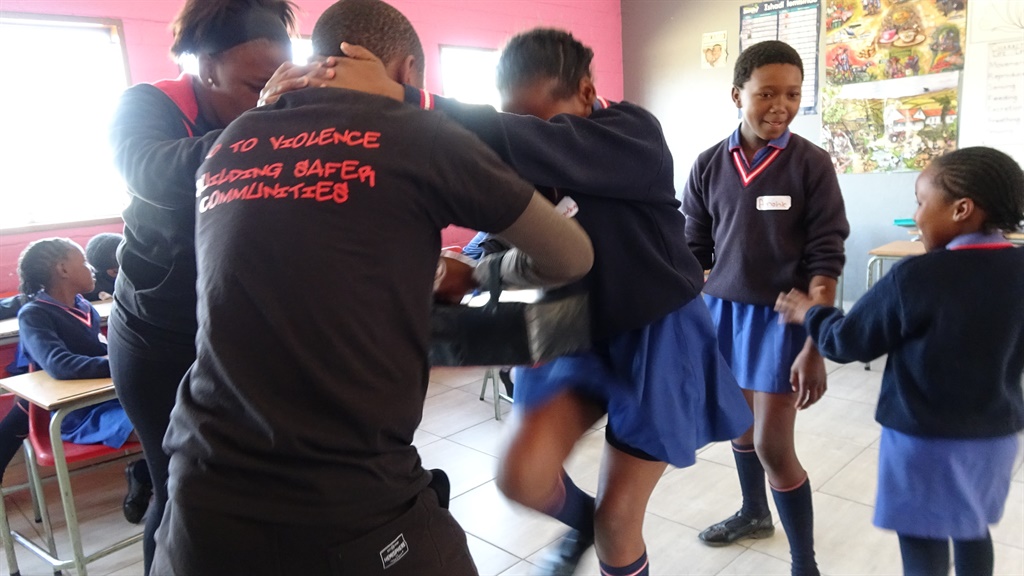 And what do the boys do when the girls are playing warriors?

Dimakatso says that the boys have their own programme, where they are taught how to be empathetic, and how they can be active participants in the fight against sexual and gender-based violence.

"We want them to sympathise with women. We want them to see things in a different eye because in our black communities, boys are told that boys will always be boys and that if they smack a girl on the bum or anything, it’s normal for boys to do that; that it’s right for a boy not to cry."

But there is more to sexual and gender-based violence awareness than punching bags and learning how to fight. Debi Steven, the founder of ABS, told us that the most important thing for her and the work that they do at ABS is for girls to learn, understand and practice self-love, and for boys to do the same as the future stewards of our society.

For girls, the important thing is "to give them the confidence to say I actually love myself, I respect myself," and for boys, they need to believe that they can be our future heroes when given the right support, she says.

Debi founded ABS after her unfortunate experience with sexual violence, and the South African branch of the organisation was introduced last year, 2017.

"I'm a survivor; and I'm very passionate about trying to change the way women are treated," she tells us. "All over the world, no matter where you go, and no matter the differences in culture, women are shown the same things about disempowerment and not having voices. We're not encouraged to be physical, which is part of the gender roles [that are instilled in us]."

Debi refers to the self-defence training they give to girls as feminist self-defence. She tells us that it isn't just about fighting and physical skills, but it also about empowering girls and teaching them to be the warriors that society tells them they cannot be.

"With feminist self-defence, we're not victim-blaming or giving rules, but we're putting them at the centre and reminding them that they are incredible. We're using self-defence to empower."

Once they reach the end of their programme, Dimakatso says they give the young warriors and heroes a necklace with an elephant pendant on it. "One of the qualities of an elephant is that it never forgets, so we tell them to never forget what we teach them in the sessions." Young girls with their elephant necklaces

Debi explains that the fight against how women are treated doesn't end with the children. Offering workshops to teachers, parents and guardians, and to the community as a whole, Debi emphasises that everyone needs to be involved, especially parents who dictate what happens in a household and what environment children are raised in. "We get great results when the whole community is involved," says Debi.

Sign up to W24's newsletters so you don't miss out on any of our hot stories and giveaways.
We live in a world where facts and fiction get blurred
In times of uncertainty you need journalism you can trust. For 14 free days, you can have access to a world of in-depth analyses, investigative journalism, top opinions and a range of features. Journalism strengthens democracy. Invest in the future today. Thereafter you will be billed R75 per month. You can cancel anytime and if you cancel within 14 days you won't be billed.
Subscribe to News24
Related Links
The Indian dancers taking on gender-based violence
241 SA girls break the Guinness World record for the largest marimba ensemble on Women’s Day
Dr Rethabile Sonibare’s school empowers girls in Khayelitsha
Next on W24
'Travel therapy' could improve your mental health