6 women on why they prefer the term ‘queer’ 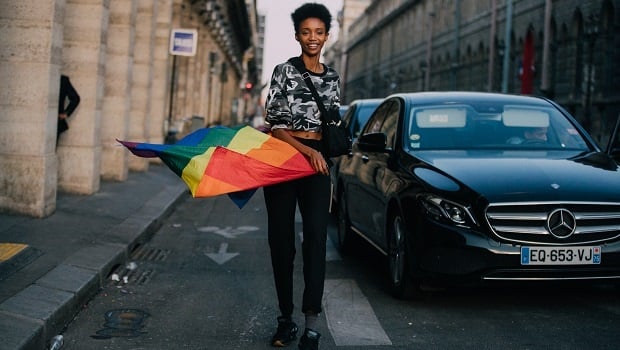 If you know you’re not straight but terms like “bi” or “lesbian” or “pan” don’t feel like a fit, it may be complicated (read: frustrating) to pinpoint how to describe your identity. Well, you’re not the only one—in fact, I recently went through this process myself. After all, sexuality isn’t always clear-cut, and it can feel strange or limiting to choose one box and stick to it. (Boxes are kind of claustrophobic, am I right?)

Personally, I landed on “queer,” a term that has made a comeback over the last couple of years. While this was once used as a slur through during the 1950s (and longer, tbh) it was reclaimed by the LGBTQ+ community. (Case in point: The beauty that is Netflix’s Queer Eye.)

“Queer” is now generally associated with the “Q” in the LGBTQ+ acronym and has become an all-encompassing term for the whole of our community. It tends to describe people who don’t identify as straight and may have fluid sexual identities or orientations. It can also describe someone who doesn’t associate themselves with a gender binary (male or female), for which the term “genderqueer” is also sometimes used.

Basically, “queer” can mean many different things, depending on who you ask. That’s why I chatted with some other queer women, to learn a little more about why this term speaks to them.

“I am a woman, and as of five months ago, I came out as queer. Because I’ve mostly dated cis men, I was never quite sure where I fit in terms of identity. About a week before my ex-partner and I separated, I came out to him because I felt I needed to be fully seen. I wanted all of me to be accepted by the person I was coming home to every night, even if I was in a monogamous relationship with a man at the time. I was so nervous to tell him, but after I did, I felt so much lighter and freer within the relationship. We separated shortly afterward for different reasons.

“Because I have a very limited experience with partners of the same sex, I still sometimes feel like an imposter. I don’t want to appropriate what isn’t mine and what others have fought so hard for—but I understand that my process might look different, and that’s okay.

“Even my heterosexual relationships have not necessarily been heteronormative, and I am constantly subverting and ‘queering’ the relationships I have with men. For right now, ‘queer’ feels good and right, and it feels like it fits me. Maybe that will change, and that’s cool, too.” — Arielle, 27

“It says my sexuality isn’t what you’d expect from looking at me.”

“My mom transitioned (she was AMAB, or male assigned at birth) when I was 10, and we lived in San Francisco, so coming out as trans meant looking to the LGBT community for support.

“Even as a pre-teen/tween I saw too much use of ‘lesbian’ to erase trans women. As an adult, I discovered I’m not just into women, but I’m not into men, so bi felt awkward. Queer feels like it gives me space to breathe and says my sexuality ‘isn’t what you expect’ from looking at me.” — Chloe, 36

“It encompasses so much.”

“I didn’t like queer for a long time. I went with hetero-flexible. But then, after my last relationship, I realised that I’m not so much hetero-flexible as a plain ol’ queer woman. Now that I’ve started using it in regular conversation and as a way to describe myself, it’s settled in quite nicely. I prefer ‘queer’ because queerness encompasses so much and means a lot of different things to different people. That’s just who I am!” —Maddie*, 28

“It gives me an identity without having to get specific.”
“I don’t necessarily prefer the term ‘queer,’ but I like it and use it interchangeably with the term ‘gay,’ ‘LGBTQ+,’ and other umbrella terms that might describe my sexuality. Although some people don’t like it—as a reclaimed slur, it does carry a history—so I won’t use it around friends who I know don’t like/identify with it.

“But I personally love it. It’s short, cute, and rhymes with a lot of things—so many pun opportunities. Most importantly, I love it because it allows people who don’t really know what they identify with yet (which is totally okay) or people who may change what they identify with over time, to always have a way of saying ‘I’m a part of the LGBTQ+ Community’ without having to get specific.” — Ellie*, 20

READ MORE: A gay couple had to give up their seats on a plane after a straight couple was given preference

“Pan/bi never felt accurate because I realised that what I’m attracted to isn’t distinctly feminine or masculine. It was actually my own exploration of gender expression, and in large part, trans and nonbinary visibility that helped me understand I wasn’t simply into hetero men and that I was not simply hetero.

“To say ‘gay’ feels like I’m taking ownership over something I had only previously supported from the outside, and mainstream gay culture as we know it has been dominated by cis white men. To say ‘bi’ feels like I’m limiting myself, as I’m not suddenly attracted to women and men only. To say ‘pan’ feels like I’m jumping on a celebrity bandwagon. To say ‘queer’ feels comfortable, which despite its outward danger in the larger world as identifying this way, feels like a luxury to me, to feel comfortable in my own skin.” — Danielle, 30

“It can allow our community to be less fragmented.”

“For me, queer is an earned, political term—’not gay as in happy but queer as in fuck you’—that can allow our community to be less fragmented, at least for those of us who like the term. It’s also a lot easier than saying, ‘I’m bisexual, female, and genderqueer/nonbinary’ and then having to explain all that.” — Racheline, 45

We live in a world where facts and fiction get blurred
In times of uncertainty you need journalism you can trust. For only R75 per month, you have access to a world of in-depth analyses, investigative journalism, top opinions and a range of features. Journalism strengthens democracy. Invest in the future today.
Subscribe to News24
Next on W24
'I promised I'd stop smoking, then my dad said something that eased my conscience from his deathbed'

Subscribe to newsletters
Voting Booth
Now that it's the New Year, what are you looking forward to?
Please select an option Oops! Something went wrong, please try again later.
The vaccine arriving in SA
31% - 188 votes
Going back to the office/ campus
3% - 19 votes
Going on a trip overseas
12% - 74 votes
Nothing, I don't expect 2021 to be any better than 2020
45% - 278 votes
Treating myself to a shopping spree
3% - 19 votes
I'm planning a big party to celebrate as soon as Covid is over
6% - 37 votes
Previous Results
Fashion
How men's swords and King Louis XIV's red heels influenced fashion's construction...