We know that men and women are often judged differently by society, but it's still incredibly disappointing when we find an example that highlights the double standard as clearly as the Mr versus Miss South Africa pageant entry requirements.

While some people were unfairly mocking the Mr South Africa top 20 finalists, we couldn’t let go of the unsettling contrast between the two pageant prerequisites.

When someone asked if the men thrust into the spotlight were the only ‘sexy’ men they could find, the official Mr SA account responded writing:

Hang on, we never said you need to be Sexy to be Mr SA. All we ask is dedication to a better SA and a good heart. If that’s not good enough for our country then we don’t know what else to give you.

While we understand that the Mr South Africa pageant does not have to abide by international regulations like Miss SA, the entry requirement distinction highlights how women are often penalised for the exact things men can easily dodge.

Here are six double standards that still exist for women in the pageant world, and not so much for the men.

Miss Ukraine 2018 Veronika Didusenko was stripped off her crown after she disclosed she was a divorced mother of a four year old, reported BBC.

Taking to Instagram to talk about her disappointment she wrote:

"My right to represent my country on the global scene was taken away from me because of the rules written 70 years ago. The archaic rules which ban mothers from the Miss Ukraine contest.”

It seems like divorced women have no place in the pageant world, while divorced men can enter Mr South Africa and no one bats an eye.

According to E News Miss Dominican Republic Carola Durán was dethroned in 2012 for being married.

Like in other countries, Miss South Africa stipulates that a candidate can only compete if she has never been married or engaged, or doesn't have children.

Mrs South Africa is the pageant that welcomes legally married women and mothers.

Being Miss South Africa will take a lot of time away families and children. While we don't permit mother's to enter, @MrsSAPageant does welcome moms and wives.

Surprisingly, unlike Miss SA or Mrs SA, contestants for Mr SA can be married or unmarried men. Their worthiness of the crown or eligibility is not tied to their marital status like the women's.

Tattoos are still not the most accepted accessory on the women pageant circuit. We reported in 2014 that the Miss South Africa organisation disqualified three of their finalists because they had visible tattoos.

On the contrary, Mr South Africa entry requirements has not even a single mention of tattoos and how they can affect contestants in the competition.

Haven’t tattoos long ceased to be thought of as taboo or inappropriate? When will Miss SA let go of the antiquated ideal of femininity?

READ MORE: Mrs SA contestant gives us the scoop on life in the world of beauty pageants

Critics argue that beauty pageants are still projecting an archaic image of the ideal woman - "pure" and virginal. And there is a lot of truth to it because to be eligible to compete for the title of Miss SA, you need to have absolutely no personal history of ever being pregnant or having a child before.

Mr South Africa contestants are never asked if they have ever impregnated anyone, so why are women scrutinised in this manner?

Responding to backlash over their entry requirements, Miss South Africa said their winners are expected to adhere to strict schedules following their crowning, stating that having children can make it hard to prioritise all the duties that come with winning the crown.

Being Miss South Africa will take a lot of time away families and children. While we don't permit mother's to enter, @MrsSAPageant does welcome moms and wives.

But why are young fathers able to enter Mr South Africa without having their children held against them?

This is another example of the way men are disproportionately praised for taking care of their children, whereas women are expected to be caregivers.

Miss Earth-Air 2012 Stephany Stefanowitz was ruled "ineligible" for the Binibining Pilipinas 2017 pageant because she was 'overage'. 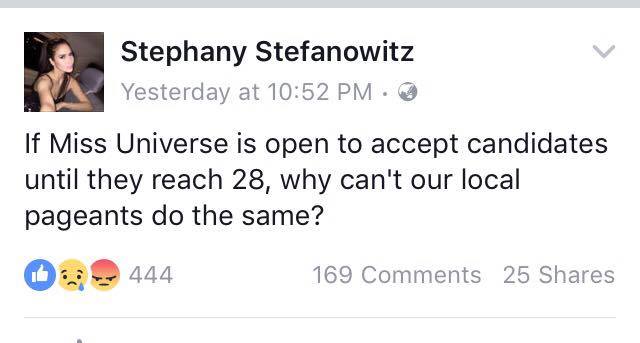 So, even if you met all the other requirements, you’ll be given the boot from competing for the coveted Miss South Africa title if you are over 26-years, however the oldest a man can enter Mr South Africa is 33-years of age.

Is this feeding to the notion that women age faster than men?

We spoke to the CEO of Mr SA JP Roberts and he admits there is a divide in the pageant world, but insists Mr SA should not be compared to Miss SA because they are hosted by different organisations.

“I don’t think the two should be compared because the vision is not the same. We are in the mission of moulding men into role models who stand for the upliftment of the community,” he said.

Regarding contestants with children, he says, “one of my contestants just became a father, and we are all happy for him. Mr SA is someone who is a role model to other men, women and even his own children.”

What do you think? Chat to us here

We live in a world where facts and fiction get blurred
In times of uncertainty you need journalism you can trust. For only R75 per month, you have access to a world of in-depth analyses, investigative journalism, top opinions and a range of features. Journalism strengthens democracy. Invest in the future today.
Subscribe to News24
Related Links
I used to enter beauty pageants. Now I think they should be scrapped
“I lost 14kgs in 4 months to enter Miss SA” - local curvy model
Miss Iceland quits beauty pageant after being told she's “too fat”
Next on W24
The 4 superpowers every woman needs