A woman wearing a niqab and headscarf, with other shoppers in Istanbul, August 13, 2018. YASIN AKGUL/AFP via Getty Images

Americans began donning face masks this week after federal and local officials changed their position on whether face coverings protect against coronavirus.

This is new terrain for many, who find themselves unable to recognise neighbours and are unsure how to engage socially without using facial expressions.

But not for Muslim women who wear the niqab, or Islamic face veil. Suddenly, these women – who are often received in the West with open hostility for covering their faces – look a lot more like everyone else. Many people are using cloth to cover their faces during the coronavirus outbreak, San Francisco, California, April, 1, 2020. JOSH EDELSON/AFP via Getty Images

Targeted for their religious dress

I interviewed 38 British and American niqab wearers for my upcoming book on Muslim women who wear the niqab in the United States and United Kingdom. Almost all of them were British and American citizens, but they came from all across the world and all walks of life. They were converts from Christianity, Judaism, former atheists, white, African American, African, Arab and South Asian women.

The niqab – a garment that is not required by Islam but is considered recommended in some interpretations – is usually worn with a loose, coat-like garment called an abaya and a hijab, or headscarf. Some women pair it with a long skirt and tunic to conceal the body shape.

All the women interviewed for the book felt the spiritual benefits of niqab-wearing, which makes them feel closer to God and deepens their practice of Islam. But wearing it in public often subjected them to Islamophobic, racist and sexist street harassment.

Research confirms that Muslim women who wear Islamic dress in non-Muslim majority countries are frequently subjected to abuse. In a 2017 American study of 40 Muslim women, 85% reported verbal violence and 25% had experienced physical violence.

Wearing the niqab, the most conspicuous form of Islamic dress, is most dangerous. Eighty percent of British niqab wearers interviewed for a 2014 report by the human rights group Open Society Foundations had experienced verbal or physical violence.

‘Everyone suddenly understands it!’

Now, in an unexpected turn of events, people across the West are jogging in face masks and grocery shopping in bandannas tied across their mouths. That’s making public life in the niqab much more pleasant, say Muslim women. “There’s a marked difference to the way I’m being perceived. Nobody is giving me dirty looks because of my gloves and the covered face,” said a woman I’ll call Afrah, from the the U.K., in a Facebook Messenger chat. “Everyone suddenly understands it!”

I use pseudonyms to protect the identity of the women in my research, as talking about niqab use is a sensitive issue.

“I was wearing a handcrafted niqab today and it was amazing,” Jameelah wrote to me from France, where the niqab is legally banned in most public spaces. “Because of the situation, I didn’t receive malicious glares.”

Fashion designers are even trying to make face coverings look stylish – an effort that has Muslim women long perceived a security threat rolling their eyes on social media.

Rumana, a Muslim from Croatia, told me that the growing acceptance of face covering has helped her overcome a reluctance to use the niqab.

“I am usually an anxious person who doesn’t like to attract attention so that was always the biggest issue. Now that face coverings are seen everywhere,” she says, “I have finally found the courage to wear it.”

And here I was told covering your face was objectively offensive and a security threat pic.twitter.com/f4CPtjiauF

Even some non-Muslims are interested in the niqab as a means of protecting against coronavirus.

Afrah, from the U.K., told me that her non-Muslim aunt wants to use a niqab now because she finds regular face masks uncomfortable. And Sajida, an American Muslim, spoke of a convert friend whose father – a vehement critic of Islam and believer in anti-Muslim conspiracy theories – now encourages his daughter to wear a niqab to prevent the spread of coronavirus.

The niqab alone is not sufficient protection against influenza-like viruses because it is not airtight. Mosques are warning women who wear the niqab to additionally wear a mask underneath for more effective protection. However, the niqab, like any cloth face covering, is likely to protect others from the wearer’s sneezes if worn snugly around the eyes, ears and nose.

The niqab-wearing women who commented for this story recognise that the improved perception of face covering comes at a time of crisis, when ordinary social norms and interactions are suspended.

“I’m wondering if this empathy will continue or will it disappear as soon as the pandemic’s over,” Afrah said via Facebook Messenger. “I wonder if people will keep this reflection, this need to protect oneself, no matter the reason.”

“I hope the sisters who were previously anti-niqab and then embraced it in a time of need and fear don’t return to their niqab-shunning ways,” Sajida said via email.

For now, niqab-wearing women say, they are in high demand as experts on face covering.

Muslim and non-Muslim friends donning the niqab for the first time need their help tying it securely, and ask whether it’s culturally appropriate to cover just the nose and the mouth – rather than the whole face except the eyes. 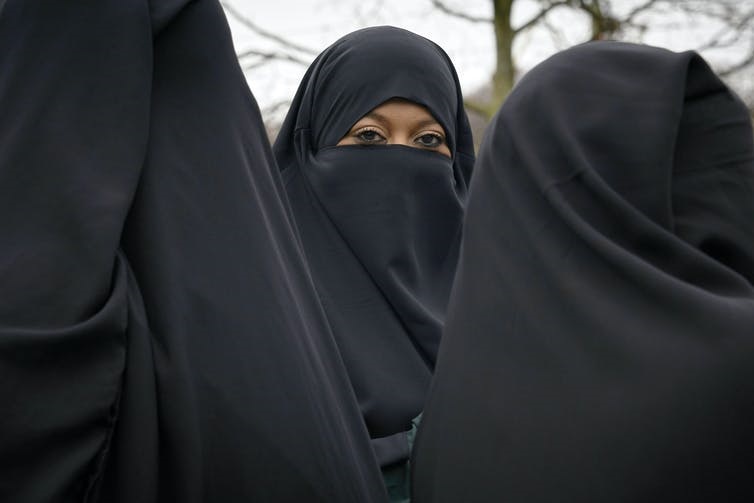 The eyes can say a lot even when one’s mouth is covered. Nacho Calonge/Getty Images

Women who wear the niqab can also speak from experience about communicating with a covered face. Many people unused to wearing masks find it difficult to convey emotions or pick up on social cues.

“Smile! Facial expression is easily and quickly noticeable because of the eyes,” Asma recommended.

Research suggests that detecting human emotion requires looking at much more than facial expressions anyway. The niqab-wearing women I interviewed for my book “make an extra effort,” as they told me, to communicate. They wave, speak and use body language to connect.

“I have to be more outwardly chatty and friendly,” Soraya from Scotland said. “If I’m standing at a bus stop, I say ‘hi.’ You can see I am smiling because my eyes crinkle.”

We live in a world where facts and fiction get blurred
In times of uncertainty you need journalism you can trust. For only R75 per month, you have access to a world of in-depth analyses, investigative journalism, top opinions and a range of features. Journalism strengthens democracy. Invest in the future today.
Subscribe to News24
Related Links
Veiled performer breaks taboos in Senegal - she raps about controversial societal issues that...
First hijab ballerina, Stephanie Kurlow: 'Allow yourself to feel freedom when you express your...
Croatian designer launches ‘cheerful’ mask line amid coronavirus outbreak
Next on W24
No, chivalry is not dead – but it’s about time it was