"My life, your entertainment" - why tourists need to stop using African people as props for Instagram likes 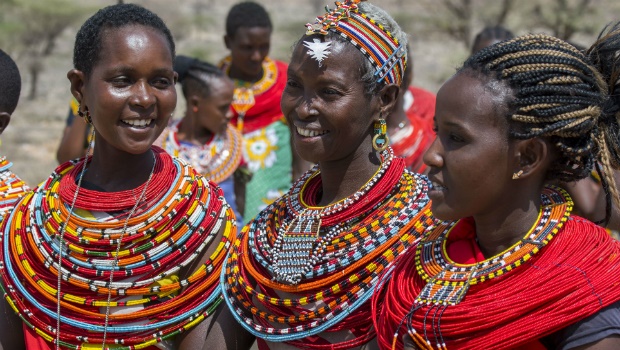 If the often culturally appropriated Maasai cloth could talk, it would say "all the women in me are tired".

This traditional cloth would be tired from being used as a mere prop for social media aesthetics.

But Kenya's latest encounter with behaviour adjacent to cultural appropriation is not only about their traditional Maasai cloth print and overall awe-inspiring traditional attire, but also the use of actual Maasai people, which is probably much more culturally offensive.

The thing is, whenever culture vultures travel - to African countries in particular - they are seldom short of resources to prey on.

They adorn themselves in traditional regalia in the name of fashion, express performative (it can be genuine too) affection towards local children for pictures and they never forget to go home with that one video of a group of locals that was prompted to dance only to the sound of hands clapping or to absolutely no music at all.

Urban Dictionary defines a culture vulture as "a person or an organisation making profit using unhonourable practices from a culture they do not care for".

And that's exactly what Russel Bateman's controversial invite-only fitness club "Skinny B* Collective" did when they visited Kenya for a retreat a few days ago.

An Instagram account I like to refer to as fashion and culture whistle-blowers, Diet Prada, dropped a few videos revealing exactly what went down when this club did some training in in Kenya.

READ MORE: Woman talks about growing up in an all-female village where men are banned

In their caption, Diet Prada wrote: "Among the sisterhood-fostering activities like hot air balloon rides, chef-prepared organic meals (that chia berry jam!), and dancing ‘round a tree of life, they also managed to use the local Maasai people not only as a backdrop, but as literal props in their fitness routines."

In not so many words, the caption then continues to essentially highlight how culture vulture antics are, in fact, a brand of colonialism as they say: "It’s 2019 and apparently people still haven’t learned that POC/ethnic groups don’t exist to embellish already privileged lives. The Colonial mindset is alive and well I guess..."

In the videos, the group of almost identical fitness bunnies is seen engaging in vigorous exercise to some electro music while local Maasai people jump up and down in a circle around them almost as if a button were pushed to get get them to do "that thing Africans do".

It starts with something as seemingly "insignificant" as only ever referring to any country on this continent as just Africa rather than naming the exact place. International celebrities often say they're "visiting Africa" when they mean they'll only be in Lagos for about four days, for example.

Artists go on world tours that very seldom ever have a stop in one of our 54 countries because apparently we're not part of the world?

And when they do visit, our people, our culture, and our traditions serve as the perfect backdrops and props for their "enlightened experience," which is actually a mere portrayal of aestheticised ignorance.

The issue is not that keen travelers love visiting us. If anything, tourists are always welcome in the 'motherland' - ask us questions, support our businesses, enjoy our arts and culture as well as our picturesque sunsets.

This Kenyan fitness retreat then, is quite a similar offense to that committed by a Parisian travel vlogger Scheena Donia, who visited Benin earlier this year and snapped some great, albeit eyebrow-raising stills of her Zara looks.

Local people who appeared in her images all seemed somewhat visibly irked behind her.

From this Instagram 'lookbook', a think piece by a Congolese writer stemmed and was published on Odyssey Online.

In it, the writer notes the biggest issues they have with the images, saying "when I look at these pictures, I see somebody from another country flaunting their wealth and taking pictures to stunt for their followers. Two, when you go to another country you respect the local people and not use them or their neighborhood as a backdrop. And three, the local's faces can tell you that they tired of it. They rather you buy their food rather than going around, touch food their selling and use it as a prop."

New York Times Best-selling author and style maven Aimee Song, also dabbled ever-so-slightly in one of the most popular culture vulture activities during her trip to Kenya last year - getting locals to dance around you for a video:

issa dance party. Dance is as universal language as music. Dance is a human story. Dance is a form of language that transcends not only cultures but the art of dance is understood everywhere. Loved dancing with you girls. @metowe #metowe

These incidents are similar to the ethically-conflicting phenomenon of those voyeuristic townships tours here in South Africa, where tour buses filled with tourists meander through the streets of townships as the residents probably think to themselves "my life, your entertainment".

Again, we love that the rest of the world has a place in their hearts for our culturally rich continent, so this is not about discouraging any future visitors.

By all means, take pictures with the Big Five, but can you please leave our people out of it, especially when they have not consented?

African people - especially the often exploited Maasai people of Kenya - are not props and people's corrugated iron homes may be fascinating to you, but they are not backdrops for your 'edgy' IG feed.

We live in a world where facts and fiction get blurred
In times of uncertainty you need journalism you can trust. For 14 free days, you can have access to a world of in-depth analyses, investigative journalism, top opinions and a range of features. Journalism strengthens democracy. Invest in the future today. Thereafter you will be billed R75 per month. You can cancel anytime and if you cancel within 14 days you won't be billed.
Subscribe to News24
Related Links
Burberry's Chinese New Year campaign slammed on social media for being 'creepy'
A Twitter account is exposing white women who pretend to be black
Fashion Nova has released a range of sexy geisha costumes for Halloween and people aren't happy...
Next on W24
Feeling low? Here are great ways to get out of that rut