Political satire has a rape problem 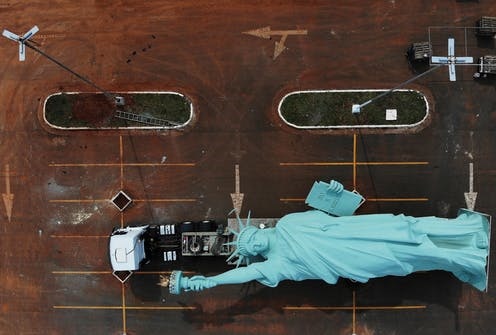 The female form is often used to depict themes of freedom and justice – and satirists think it’s useful to extend the metaphor to rape. But that’s a problem. EPA/Joédson Alves

In 2017, a parade float featuring a giant model of Donald Trump raping the Statue of Liberty travelled the streets of Düsseldorf as part of Germany’s annual Rose Monday Carnival. The float symbolised America’s violation under Trump’s power. A second float, which travelled behind, showed the Statue of Liberty taking her revenge, brandishing Trump’s severed head.

Lady Liberty may have triumphed in the end, but by using the rape of a metaphorical female body to symbolise corruption, the Rose Monday Carnival played into a wider tradition of sexual violence in political satire.

Metaphorical female bodies have been used to represent institutions, morals and communities since the goddesses of antiquity. They are still all around us – just think of the Statue of Liberty, Lady Justice, the Mother of Parliaments and Mother Earth as a few examples. Each of these personifications is often depicted in a state of sexual violation.

Cartoonist Zapiro’s work “Rape of Lady Justice”, for example, depicts former South African President Jacob Zuma preparing to rape a woman labelled “Justice System” who is being held down by members of his party, the African National Congress. A dripping showerhead sticks out of his head in reference to Zuma’s testimony during a 2006 rape trial that he showered after sex to protect himself from HIV.

According to Zapiro, the cartoon represents the “abuse of the justice system” and was inspired by attempts to prevent a corruption case against Zuma reaching court.

The cartoon quickly generated controversy, with complaints made to the Human Rights Commission that it was defamatory, racially loaded and insensitive in a country where rape is “rampant”.

Zapiro justified his image by asserting that “the meaning of the cartoon is quite obviously metaphorical”, showing the “abuse of the justice system, not of a real woman”.

READ MORE: Zapiro, stop using our trauma for your metaphor

But even if these metaphors of rape satirise power, they are also creating further power imbalances.

Zapiro deliberately plays upon Zuma’s previous rape case, using the experiences of the victim to make a wider political point. The violation of the plaintiff becomes the violation of the entire justice system. She is transformed into the figure of Lady Justice at the same time as her violation is employed as a satirical vehicle. She is doubly exploited, first as a rape victim and then as a metaphor.

When Brett Kavanaugh was appointed to the US Supreme Court in 2018, despite accusations that he had sexually assaulted psychology professor Christine Blasey Ford when they were both teenagers, a cartoon appeared depicting Lady Justice being held down by male arms bearing the Republican logo.

Similarly, Lady Justice was depicted unconscious behind a dumpster as a reference to the shockingly lenient six-month sentence handed to U.S. student Brock Turner for sexually assaulting an unconscious woman at Stanford University in 2015.

These images could be seen as fitting for the terrible crimes they portray, but the power dynamics at play in the metaphor are still skewed.

READ MORE: A viral thread on Twitter that asks what women would do if there was a 9pm curfew for men at night, is heartbreaking

In Daryl Cagle’s depiction of the Turner case, the focus is actually Aaron Persky, the judge who decided on the sentence. He is the only labelled figure in the image and the only one to speak. The victim in the cartoon is recognisable as Lady Justice – not the real-life victim, Chanel Miller.

By using a metaphorical female figure, the image no longer represents Miller’s suffering but the wider corruption of the American legal system and the moral bankruptcy of Persky as a judge. She is obscured by this wider metaphor.

These images of violation are not about assault at all. They only use rape to symbolise wider corruption. The suffering of individual women becomes little more than a device. These cartoons are not actually about women, but men.

Zapiro claimed that his controversial cartoon could not be considered hate speech as it does not “incite harm”. He also referenced the freedom of the “jester’s space”, in which cartoonists should be allowed to “portray events and public personalities” in a potentially offensive way.

However, the repetition of images of violation can do social harm by reinforcing damaging gender roles. In these cartoons, male power is repeatedly associated with sexual domination. Women are also continually presented as vulnerable victims.

They are meant to satirise male power but these cartoons actually reproduce unequal gender relations that play into wider rape culture. In the wake of #metoo and #timesup movements, it is hard to comfortably associate the subject of rape with an unquestioned “jester’s space”.

It is time to stop using a violated female body as our go-to symbol for political exploitation. We need to find new ways of critiquing male power in which the punchline is the man and not female victims.

We live in a world where facts and fiction get blurred
In times of uncertainty you need journalism you can trust. For 14 free days, you can have access to a world of in-depth analyses, investigative journalism, top opinions and a range of features. Journalism strengthens democracy. Invest in the future today. Thereafter you will be billed R75 per month. You can cancel anytime and if you cancel within 14 days you won't be billed.
Subscribe to News24
Related Links
"If the government doesn’t announce it has stopped Koffi Olomide, then we are taking to the...
‘I was raped by my ex and didn’t realise it until 3 years later’ – this woman tells us how she...
What a reporter being suspended for Kobe Bryant rape case tweets says about society right now
Next on W24
How science says you could be happier

Read more on:
me too movementsexual assault
Newsletters