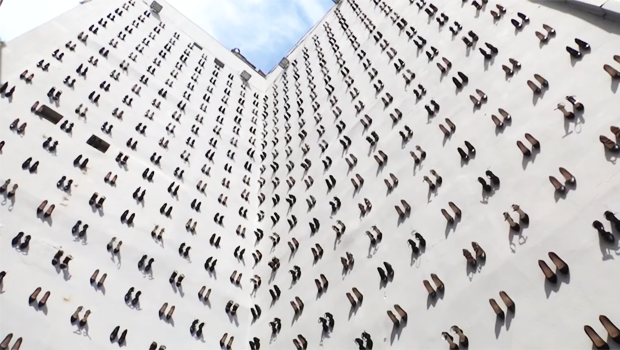 In Turkey 49 women were reportedly killed in August alone. Credit: Screenshot from Reuters

Four hundred and forty pairs of high heels have been hung in Istanbul, commemorating the 440 women killed as a result of domestic violence in Turkey last year. The installation was erected at the centre of the city by artist Vahit Tuna.

"The term femicide is something people are not aware of but we see that they are discussing it but until now they haven't challenged themselves about it. I think this creates awareness and is something that influences people and makes them think," says Vahit.

In Turkey, shoes are traditionally placed outside the front door of those who die. With the stark structure in such a public setting the rows of silhouettes send a powerful message to passers by.

In Turkey 49 women were reportedly killed in August alone.

Watch the video for more.

We live in a world where facts and fiction get blurred
In times of uncertainty you need journalism you can trust. For only R75 per month, you have access to a world of in-depth analyses, investigative journalism, top opinions and a range of features. Journalism strengthens democracy. Invest in the future today.
Subscribe to News24
Related Links
‘We know your pain all too well’ - Karabo Mokoena’s mother and sister send a message of comfort...
#AmINext hashtag reveals the fear and anxiety SA women have to live with and it's terrifying
This women network launched a campaign to challenge "marketing gimmick" of Women’s Month
Next on W24
Woman spends over R70 000 in 5 months on Barbie doll collection