Skin bleaching in 2019 - why are people still doing it and what are the dangers? 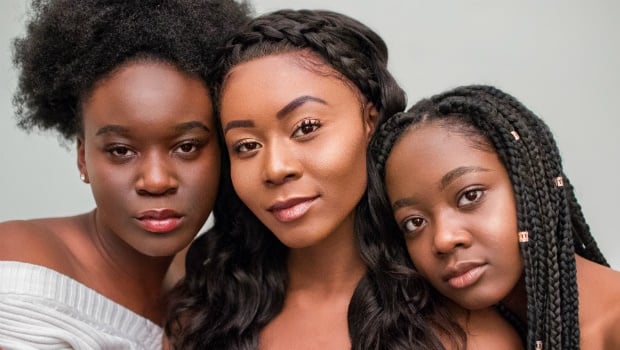 When people are going as far as scraping their melanin off, you have to ask just how harmful beauty standards have become.

A video of a woman getting a skin bleaching procedure in Nigeria, surfaced on social media this week, causing much concern about not only her health, but the harmful effects of colourism on the black community.

In the video, we see a faceless woman scrubbing the legs of a woman in a bathtub with what appears to be a chemical substance dissolved in some hot water, revealing a pale layer of skin as the dubious 'aesthetician' essentially peels off the melanin on her client's legs.

Although, we cannot dictate what people should or shouldn't do to their bodies, a few social media users expressed their concerns of the implications circulating such a video may have on susceptible viewers.

That skin bleaching video is really stomach churning. Only reason I RT’ed it is because it’s necessary. Necessary that black people see & realize just how poisonous colorism is. The extreme lengths many black women (and some men) go through to not suffer from it.

This is so sad and I can’t even imagine how toxic whatever they’re doing is because melanin shouldn’t just scrub off like that.

And skin bleaching is not only prominent in Nigeria, but in other parts of Africa and Asia too.

In 2013 the BBC reported on a study that suggested one out of three South African women bleach their skin.

Women have been lightening their skin for decades - mainly by using, often, dangerous products in order to obtain blemish-free, lighter and brighter skin tones. And over the world, the skin-lightening market is now bigger than ever - the fastest growing sector being in Asia.

In many African cultures, light-skinned women are still considered more beautiful. So in order for dark-skinned women to fit in and feel more accepted by their society, they opt for skin lightening products from markets with vendors promising them skin miracles, as we saw in the viral video above.

In SA, Huffington Post notes that, among others, local vendors are still big sellers of harmful lightening products. The Daily Mail claims that most of these creams contain compounds like hydroquinone and tretinoin. These substances are dangerous and could lead to possibly lethal health concerns like liver damage, skin cancer and mercury poisoning.

In 2015 the Ivory Coast banned skin lightening products due to their harmful nature. And in 2016 Ghana issued a ban on the importation of all products containing the dangerous skin-lightening chemical, hydroquinone. But even though these products are banned in many African countries, they are still widely used.

African pop star, Dencia also has her own lightening product known as “Whitenicious”. She claims that the cream is intended to remove dark spots and that it is out of her control if customers use it to whiten their entire skin.

In 2017, IOL reported that a woman was selling a skin lightening cream called Caro Light in South Africa, which apparently, transforms people's skin colour in just two weeks. Speaking to IOL, the vendor said that children as young as 16 are bleaching their skin (by following their parents' example).

A lot of women are unaware of the health hazards associated with using these often dangerous skin-bleaching products.

Especially when even our very own celebrities are using them. These treatments include skin-lightening pills, soaps, supplements, surgeries and injections.

Nowadays it seems to be more about lightening the skin from the inside out - with many going for the glutathione injected into your bloodstream via a drip route.

Local dermatologist, Dr. Nomphelo Gantsho says that glutathione is a substance produced naturally by the liver, it is found in every cell in the body. It is also found in fruits, vegetables, and meats.

"Glutathione is the most important antioxidant. Glutathione is a nutrient comprised of three amino acids (building blocks of protein): glutamine, glycine, and cysteine. It contains sulfur groups that attract free radicals, heavy metals and toxins, and enhances their elimination.

"Glutathione is administered intravenously as a skin-whitening agent. The synthetic glutathione inhibits your body's protection of melanin synthesis."

How safe is this?

No one really knows yet. Taking glutathione in reasonable amounts appears to be quite safe, although it should be avoided in people with milk protein allergies and in those who have received an organ transplant.

"But there is very little evidence that establishes either the safety or efficacy of glutathione injections for skin lightening. More research needs to be done. Skin whitening injections aren’t known for their health benefits," says Gantsho.

There is inadequate safety documentation on the use of high doses of glutathione administered at 600 mg to 1.2 grams once weekly and even up to twice weekly. At very high doses glutathione is unsafe and may result in serious consequences to the health of users:

Adverse drug reactions resulting from the use of glutathione IV for skin whitening have been reported and include the following:

1. Long term chances of developing skin cancer, glutathione strongly inhibits the production of melanin that is a dark pigmentation protecting a persons body from the harmful UV rays from the sun.

3. Irregularities in the thyroid function.

6. When not done under sterile environment it can cause introduction of disease and sharing of needles can lead to transmission of life threatening infections.

7. Taking glutathione long-term has been linked to lower zinc levels.

Given the risks of harm, and the overall lack of medical need, Dr. Nomphelo Gantsho recommends consumers think carefully before undertaking skin lightening with glutathione injections.

We live in a world where facts and fiction get blurred
In times of uncertainty you need journalism you can trust. For only R75 per month, you have access to a world of in-depth analyses, investigative journalism, top opinions and a range of features. Journalism strengthens democracy. Invest in the future today.
Subscribe to News24
Related Links
Many women are now shaving their faces, but should you?
Why the comments about Thando Thabethe's Cosmo cover expose colourism in SA
‘I was becoming too white’ – Sorisha Naidoo speaks out about her skin bleaching
Next on W24
Ear pinning surgery is gaining popularity as the pandemic's Zoom boom has put all eyes on our ears