Should you still send a gift to the bride and groom even though you missed the wedding?

Nope, you did not read that incorrectly.

Over the last few months, I've seen, heard and read about all kinds of bridal madness. From the bride who demanded her guest fork out nearly 30k to attend her destination wedding, to the bride who tried to con her bridesmaids into helping her pay for her lavish wedding dress, brides are never without any drama.

This bride is certainly no exception.

Clearly agitated, she took to Twitter to rant, of all the things in the world, about how she believes that people should still send gifts or cards (with money in it of course) to the bride and groom even if they could not attend the wedding. 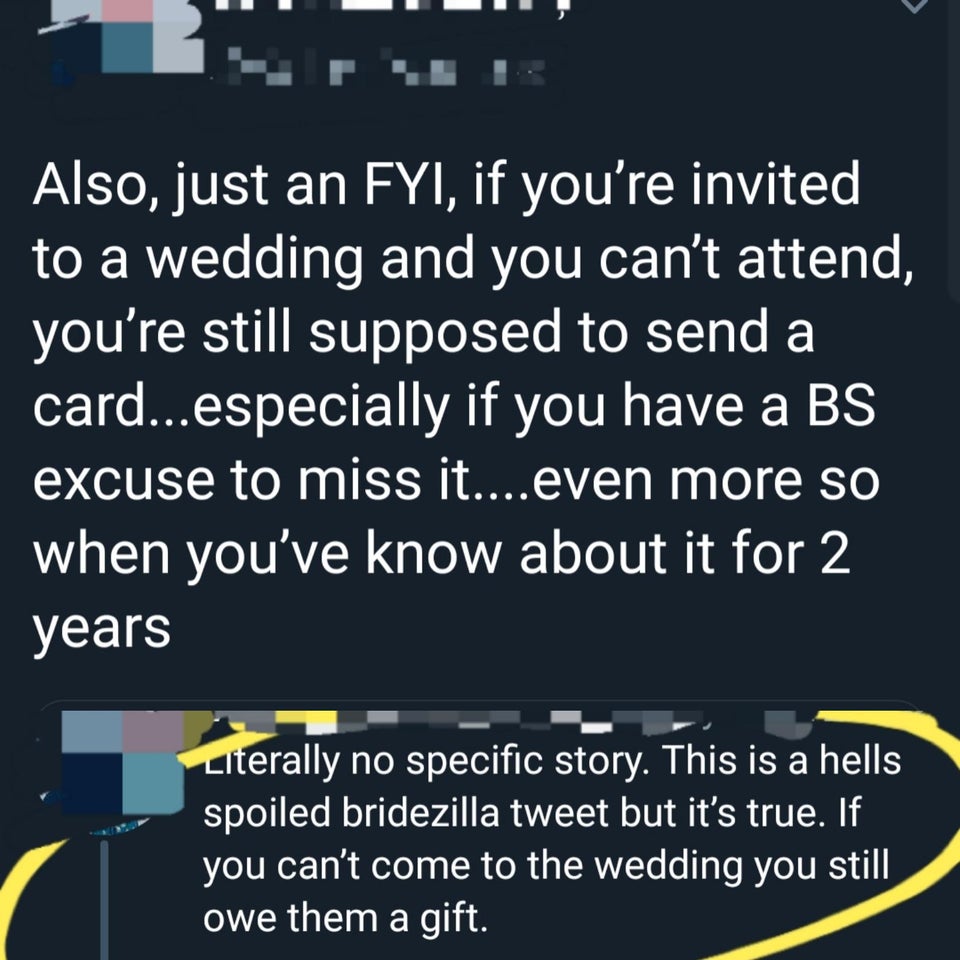 How she came to this rationale is beyond us, and clearly it's beyond the hundreds of social media users' too, because soon she was at the receiving end of hundreds of comments from Reddit users accusing her of having a wedding for the sole purpose of receiving gifts. Read some of their funny but sort of true comments below.

"This bridezilla is only getting married for the gifts if she's demanding one from the people who declined the invite. Personally, I send cards to the weddings I don't attend and a gift to the ones I'm close to but can't attend", said one users

Which is actually very nice but still a stretch. Another user wrote, "You are NOT required to send a card or gift if you're NOT attending. Send in your RSVP saying you're not attending is all that's required. Anyone who bugs you about not sending a gift has no manners, no class, and is not a true friend!".

READ MORE: Bride mistakenly invites couple to her wedding then kicks them out after realising her mistake

Other users thought that it would probably be decent to send a gift if you had RSVP'd but did not show up to the wedding as an apology.

"I believe you should give a gift either way because it is a celebration and gifts are a big deal in my culture. But in response to this post, I think it’s absolutely mandatory to send a gift if you RSVP to a wedding and then don’t show."

"My only exceptions would be if there’s an emergency in your family that is more pressing. Then send something later if you are able to."

What do you think? Should people still send gifts/cards if they did not attend the wedding?

Or should they only send them if they said they were going to attend but failed to pitch?

We live in a world where facts and fiction get blurred
In times of uncertainty you need journalism you can trust. For only R75 per month, you have access to a world of in-depth analyses, investigative journalism, top opinions and a range of features. Journalism strengthens democracy. Invest in the future today.
Subscribe to News24
Related Links
Wife stunned when mother-in-law’s replaces son’s wedding ring
Bride mistakenly invites couple to her wedding then kicks them out after realising her mistake
Bride kicks cancer survivor off the bridal party after she refused to wear a wig
Next on W24
Covid-19 vaccination wedding etiquette – Should you ask your guests to get vaccinated, experts weigh in