It seems there's always a first for something unusual and mostly offensive in the world of weddings.

This bride invited a couple to her wedding by accident and then decided to tell them to leave the auspicious occasion after she realised her mistake.

READ MORE: Bride kicks cancer survivor off the bridal party after she refused to wear a wig 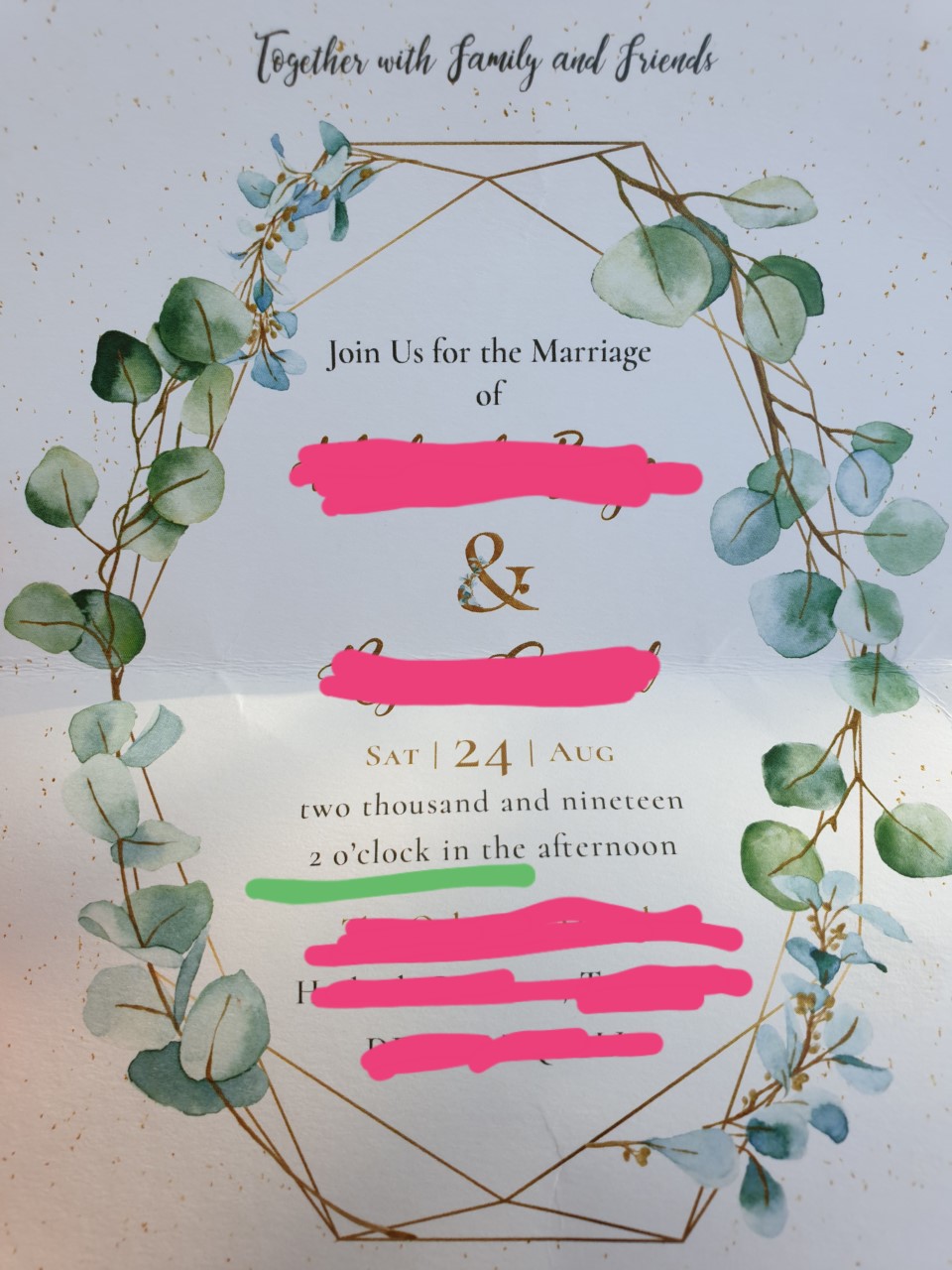 "On the invite you can see in the pic, we were invited from 2pm, so we duly arrived in time for that. We were surprised to be invited to the day, but knowing what a flakey friend the bride has been over the years, I could understand why she might be struggling to fill a room these days," she writes.

She then goes on to explain that she and her partner arrived at the wedding on time and even sat down to have what she describes as a "lovely" chat with the bride right before the evening's dinner was to be served.

Then the unimaginable happened. After the bride left, the maid of honour came over and said, "This is really awkward and I’m really sorry to say this, but you’re not supposed to be here until the evening and the bride is freaking out because there’s no place setting for you."

"I wanted the earth to open up and swallow me," the disgruntled guest wrote.

READ MORE: Mother in law forces couple to sign a contract to have only one child in exchange for paying for their wedding

She then goes on to explain how she felt like the maid of honour made her feel as if she had gate-crashed the wedding thus, prompting her to produce the invitation which she luckily had brought along with her.

That, however, was not enough as the couple was still asked to leave and then subsequently physically moved aside from the other guests. To date, she has not received an apology from the bride for humiliating her and her partner in that way.

Hilariously, she concludes how she retrieved the hundred dollar note (about R1 400) from the envelope she had gifted the bride and groom and used it to get drunk with her partner in town. She also explained how she didn't return to the wedding after, even though she was told that she could.

In an updated post, the woman shared screenshots of a conversation she had with the bride, who said that she didn't think an apology was necessary since she had read the Reddit post which in her opinion was "blown out of context".

The woman has now cut ties with the bride.

What do you think? How could the bride have better handled this situation? Share your thoughts with us here.

We live in a world where facts and fiction get blurred
In times of uncertainty you need journalism you can trust. For 14 free days, you can have access to a world of in-depth analyses, investigative journalism, top opinions and a range of features. Journalism strengthens democracy. Invest in the future today. Thereafter you will be billed R75 per month. You can cancel anytime and if you cancel within 14 days you won't be billed.
Subscribe to News24
Related Links
Bride kicks cancer survivor off the bridal party after she refused to wear a wig
Oops! Wedding photographer captures blow-by-blow images as newlyweds look on horrified as R8 000...
Mother in law forces couple to sign a contract to have only one child in exchange for paying for...
Next on Life
30-year-old bride's dream to marry comes true in hospital hours before she passes on from cancer